It’s the natural world as you’ve never seen it before.

From a gorilla embracing its caretaker to a forlorn koala in a fire ravaged forest – these are some of the stunning winning images in the annual BigPicture: Natural World Photography Competition.

Over 6,500 images were entered, from photographers around the world – all capturing captivating moments of life on Earth ‘that inspire action to protect and sustain it’.

This year’s grand prize winning image is by photographer Audun Rikardsen of Tromsø, Norway. It depicts a showy display by a black grouse looking to impress female birds from atop his coastal lookout.

Other category winners include a jaw-dropping shot of Senja Island in Norway, an unusual underwater picture of a bear hunting for salmon in Russia and a trio of polar bears in Alaska with bloodstained noses, hinting that they’ve just enjoyed dinner.

All 50 winning images will be featured in the annual BigPicture photography exhibition, set to open on July 26 at the California Academy of Sciences in San Francisco. Scroll down into a world of wonder… 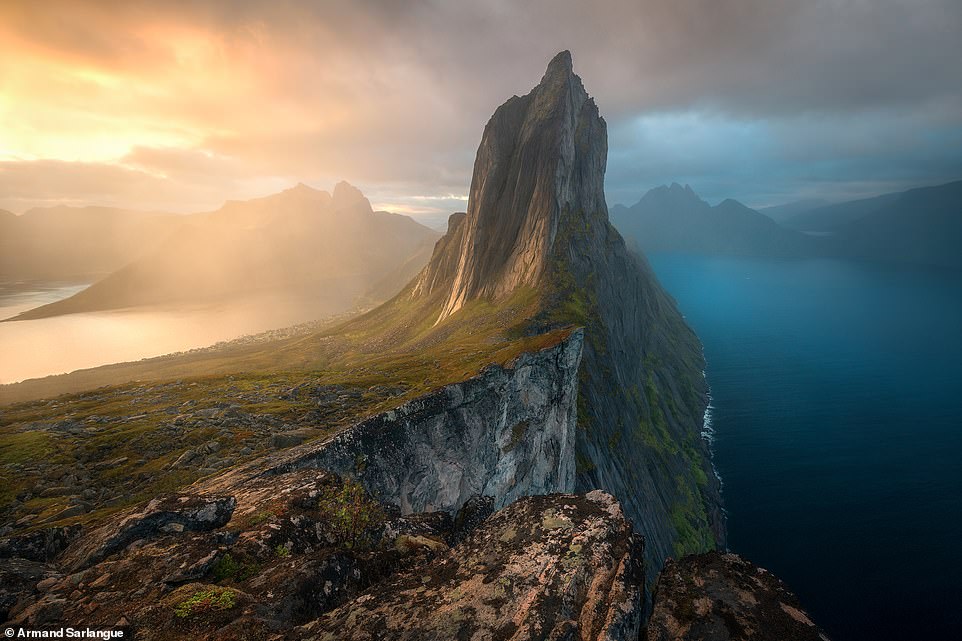 Armand Sarlangue scooped top prize in the landscapes, waterscapes and flora category with this jaw-dropping shot of Senja Island in Norway. Although it’s not the country’s best-known destination, it is quickly growing in popularity. One mountain in particular is largely responsible for that fame. Towering nearly 650 metres (2,100 feet) above the sea, Segla is a peak that epitomizes the ruggedness and wildness of northern Norway. Here, reindeer still roam the tundra while humpback whales, orcas, and sea eagles pursue herring along narrow fjords 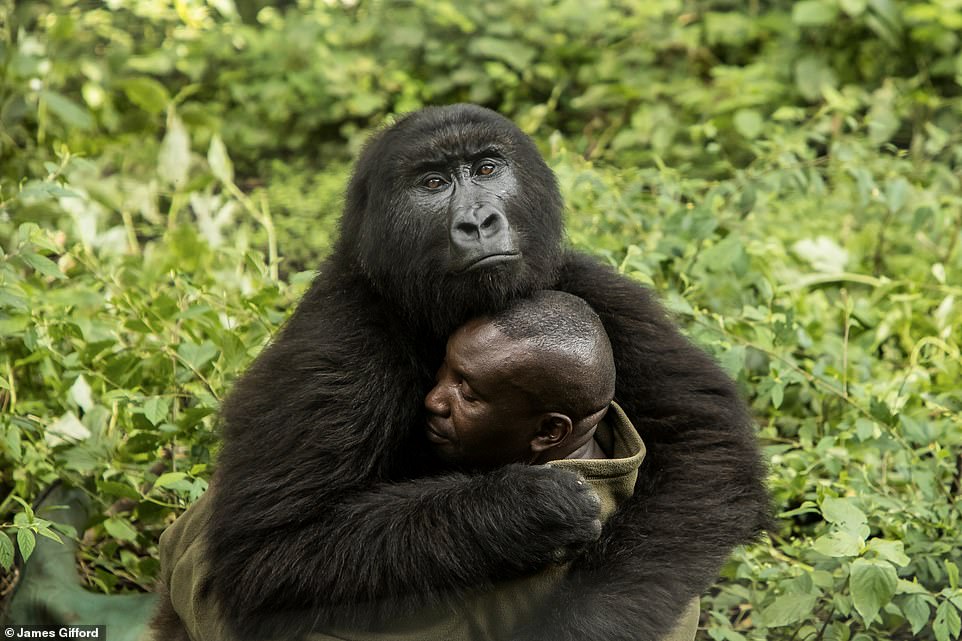 The winner of the human/nature category was photographer James Gifford with this incredible shot taken at the Senkwekwe Center for orphaned gorillas in Virunga National Park in the Democratic Republic of Congo. Here, head caretaker André Bauma risks his life daily to look after the animals. James said: ‘While I was watching from a distance, one of André’s charges enveloped him in a hug, giving me the chance to capture their remarkable relationship. I have never before witnessed such a close and natural bond between any wildlife species and a human’ 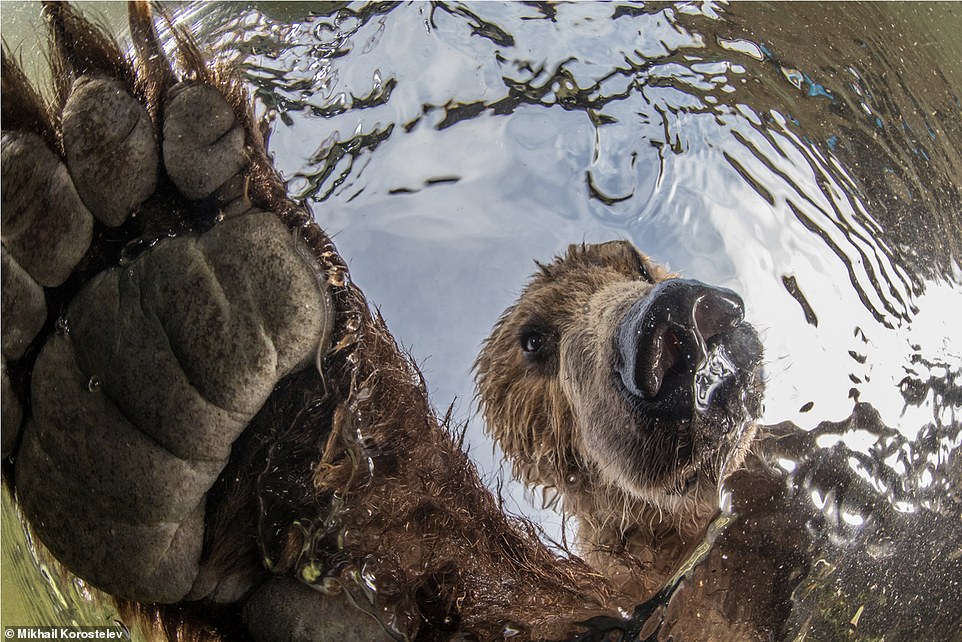 The winner of the terrestrial wildlife category was Mikhail Korostelev for this underwater photograph of a massive brown bear fishing for salmon in the South Kamchatka Sanctuary in Russia. To improve his chances of capturing the shot, Mikhail ventured to the sanctuary, an isolated 322,000-hectare reserve on the tip of Russia’s easternmost peninsula that’s federally protected. Not only is this home to the largest of all protected brown bear populations in Russia, the sanctuary’s rivers see some of the largest salmon runs along the Pacific Coast. Along the Ozemaya River, one of the bears’ favorite fishing haunts, the photographer submerged a remotely operated camera and waited. Before long a curious bear happened upon the unusual object sitting on the river bottom and, as it began to investigate, Mikhail snapped this breathtaking photograph 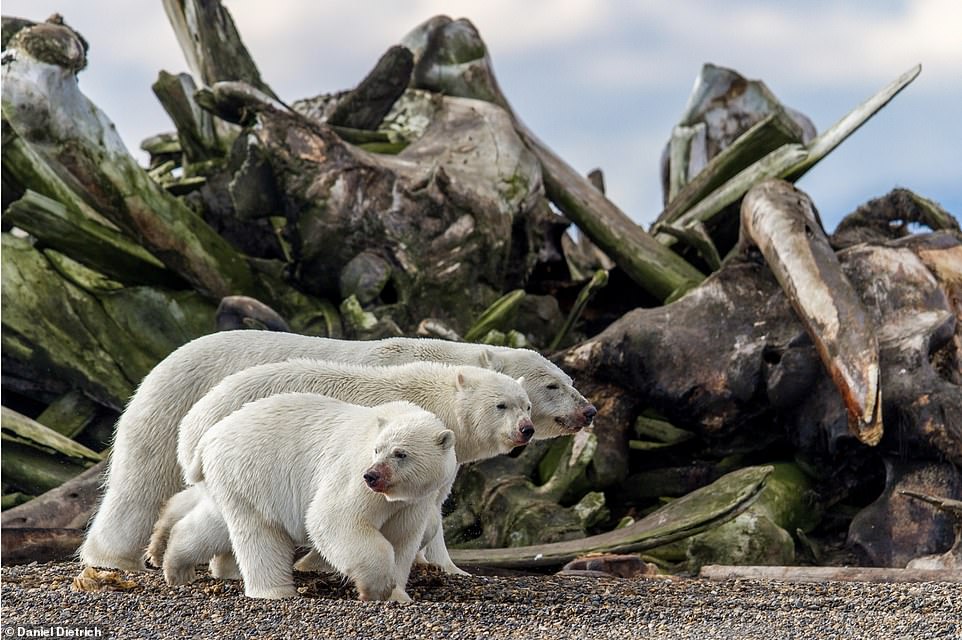 Daniel Dietrich was a finalist in the terrestrial wildlife category with this amazing shot of a trio of polar bears walking past a pile of whale bones on Barter Island in northern Alaska. Their bloodstained noses hint at a recent fresh meal. As top predators, polar bears rule the Arctic ecosystem and are typically solitary hunters, except when learning from their mothers, like the siblings pictured here 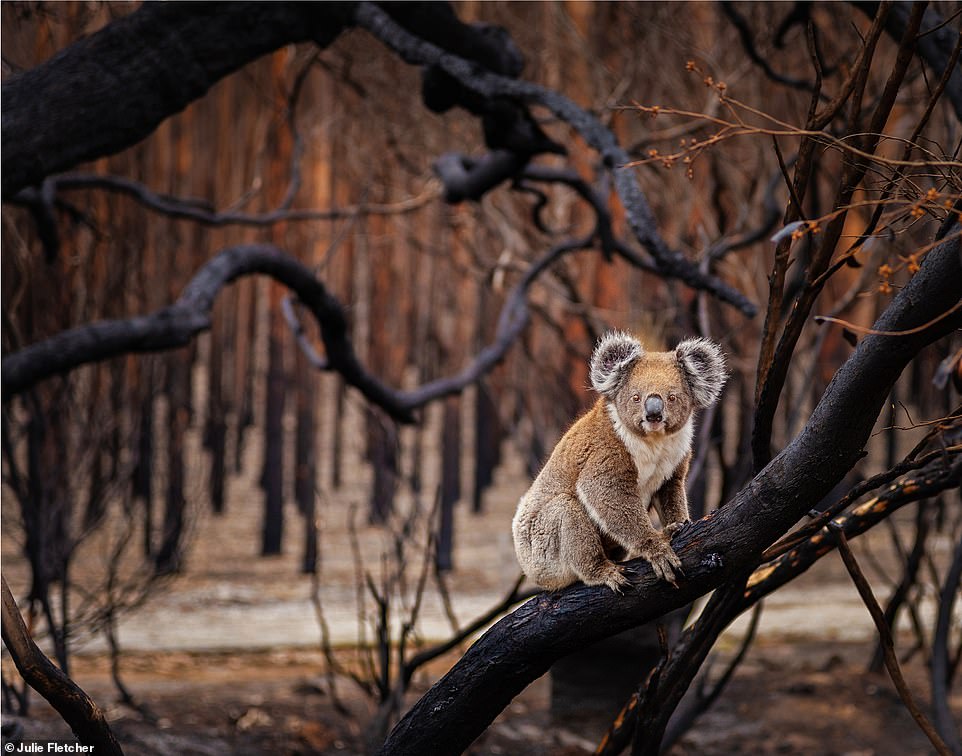 This image of a cute koala was snapped by Julie Fletcher on Kangaroo Island in South Australia and was a finalist in the terrestrial wildlife category. In 2018, Australia experienced its third-hottest year on record — temperatures that, coupled with historic droughts, created prime conditions for bush fires. For slow-moving koalas, the odds of surviving fast-burning blazes like these are slim, which made Julie’s discovery on this day all the more surprising. Having set out to document the desolate, fire-ravaged forests, Julie watched as the determined koala, with its fur singed, climb a tree and begin to munch on charred, crispy leaves. She said: ‘He was watching me the whole time with an intensity that told the story’ 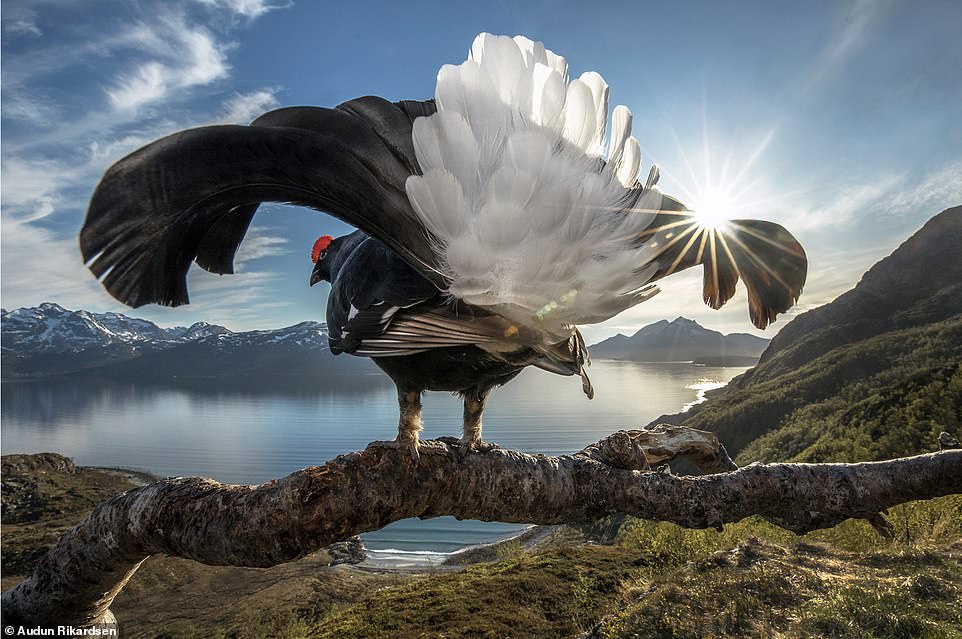 The winning shot of the whole competition, called Taking Center Stage, was this stunning image of a male black grouse captured by photographer Audun Rikardsen in Tromso, Norway. What initially drew Audun to this spot high above the sea was a golden eagle he had seen on the same perch. He spent many frigid winter days photographing the eagle. But by spring, it had been replaced by a new subject: a black grouse. Not only did the grouse quickly become accustomed to Audun’s rapidly firing camera shutter and flash, he says it was almost as if the bird enjoyed being in the spotlight 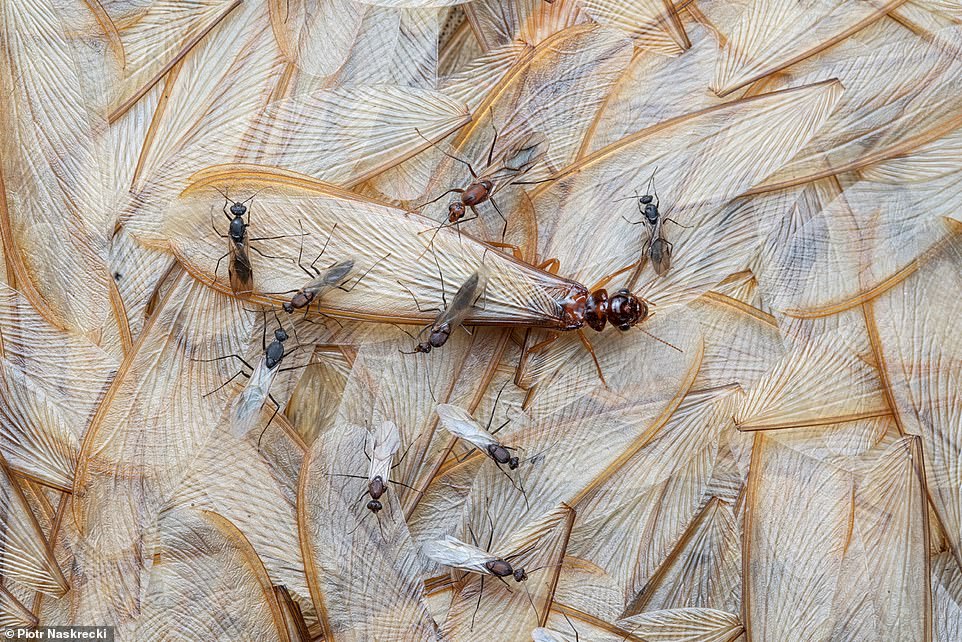 The winner of the winged life category was Piotr Naskrecki, who won with this intricate shot of small winged carpenter ants taken in Gorongosa National Park in Mozambique. Most mound-building termites in sub-Saharan Africa are eyeless, wingless, subterranean creatures. But once a year, termite queens produce winged offspring that are destined for a different existence. When the first heavy rains mark the end of the dry season, millions of these creatures make a dramatic appearance, emerging en masse. Piotr said: ‘A few minutes after landing on the ground, most individuals break off their wings and start looking for partners. Within a day, the ground can literally be carpeted with discarded wings, providing padded walkways for a variety of other creatures — including the small, winged carpenter ants in this photo, which had just completed a mating flight of their own’ 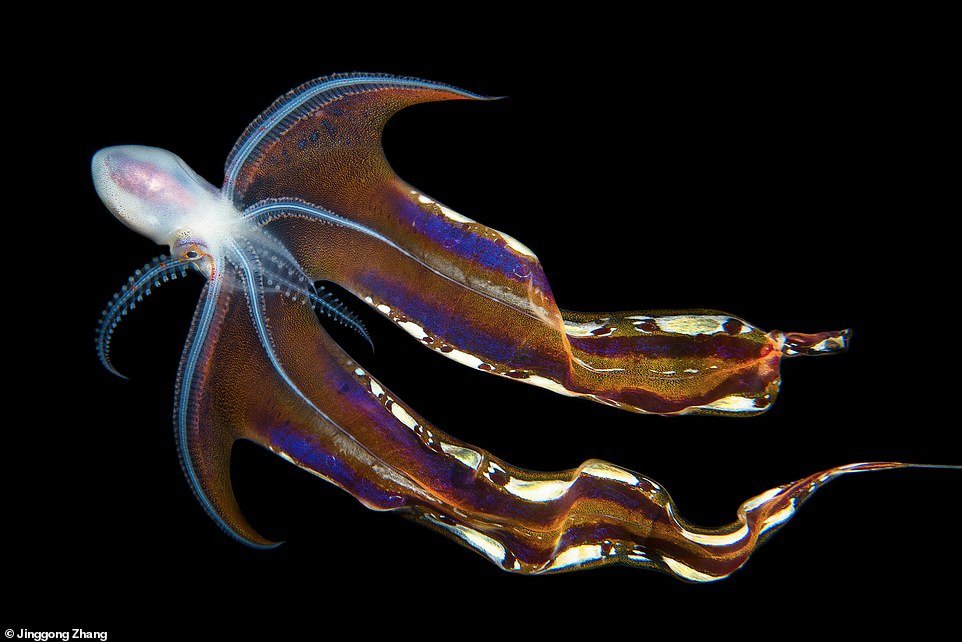 A finalist in the aquatic life category was Jinggong Zhang, with this dramatic shot of a female palmate octopus in the Philippines. While males of the species are dwarves, measuring only about 15 millimeters (less than an inch) in length, fully grown females often stretch up to two metres, trailing eye-catching membranes from two of their elongated arms as they cruise the open ocean. When threatened, a female will extend her skirt-like membrane and wave it like a billowing banner 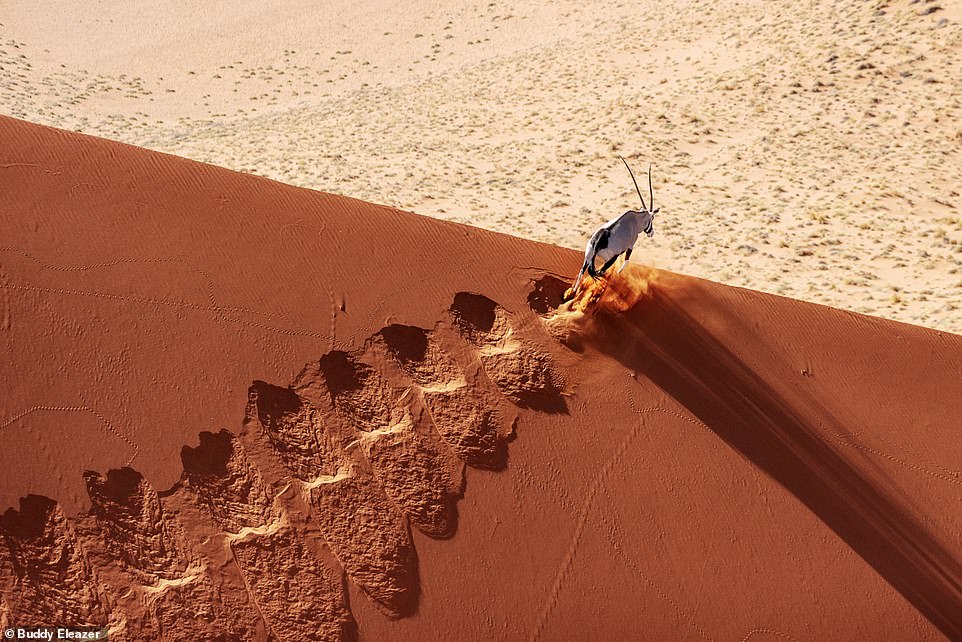 Photographer Buddy Eleazer came highly commended in the terrestrial wildlife category with this shot of a gemsbok in the Namibian desert. The antelope-like creature sends a spray of fine sand cascading down the sheer flank of a rust-red dune. Although the ascent is strenuous and the sun blazing hot, relief awaits at the top. Along the ridge line, the antelope will find a cool, moist inland breeze blowing in from the nearby Atlantic Ocean. By simply inhaling this cooler air through its convoluted nasal passages, the animal is able to reduce the temperature of the blood destined for its brain, helping the desert dweller avoid overheating in this otherwise relentless environment 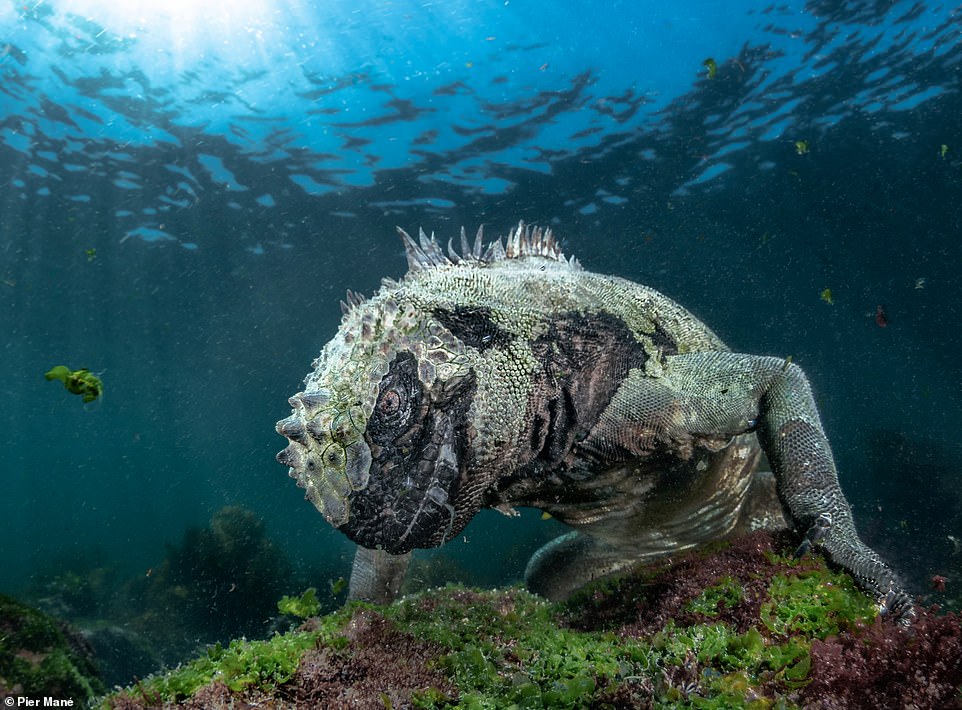 Pier Mane was the winner of the aquatic life category with this shot of a marine iguana in the Galapagos Islands. Iguanas are the only lizards to venture beneath the waves — and they make a habit of it. With food options scarce along the islands’ volcanic coastlines, marine iguanas have evolved to forage at sea. Diving to depths of up to 25 metres (82ft) on a single breath, they graze on algae that grows in the cold, nutrient-rich waters 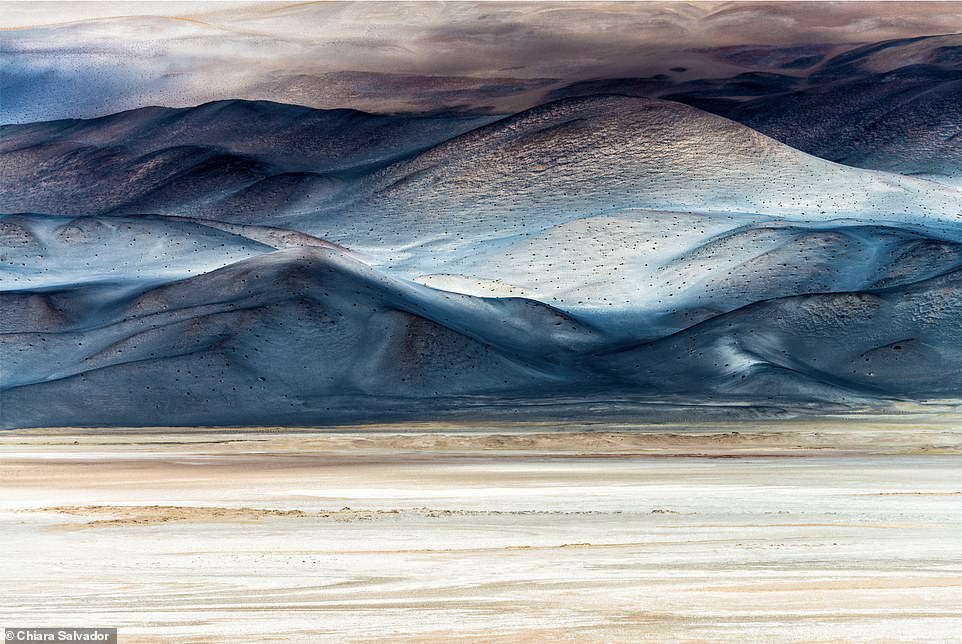 Winner of the art of nature category was Chiara Salvadori for this stunning shot taken on the high plains of north western Argentina. Standing at an elevation of 12,795 feet, surrounded by the stark beauty of the Salar de Antofalla, one of the world’s largest salt pans, she watched as the landscape’s colours changed and were shaped by the shadows of clouds that flowed fast overhead. One of the things that stood out most to Chiara was the absence of humanity here. Indeed, the Salar’s dry salt bed supports little in the way of life. Even along its edges and on the slopes of towering volcanoes nearby, only the hardiest plants and animals survive