In the midst of a pandemic that has crippled the economy and left millions fighting to survive financially, New York Governor Andrew Cuomo is getting a raise.

Meanwhile hopes for raises for New York’s lawmakers, judges and commissioners were dashed on Monday, when the commission that approves pay increases determined that there wasn’t enough room in the budget to give them out this year due to losses from the coronavirus pandemic.

‘Granting raises to public servants, no matter how much they might otherwise deserve them, is simply not possible at this time,’ the Commission on Legislative, Judicial and Executive Compensation (CLJEC) panel wrote in a report.

New York’s deficit is expected to balloon to $63billion over the next four years, fueled by the crushing cost of the pandemic and related losses in tourism, transportation and tax revenue. 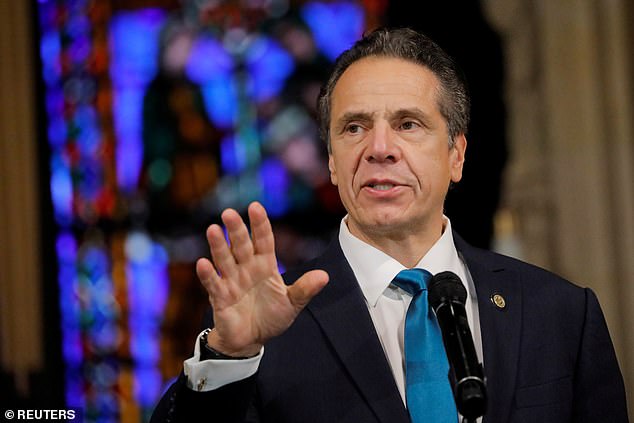 New York Governor Andrew Cuomo is set to receive a $25,000 pay raise in January 2021, increasing his salary to $250,000 and making him the highest-paid governor in the US

While the commission’s decision is merely a recommendation, with the potential to be overturned by state lawmakers, it is expected to be upheld given the current budget crisis.

If it is upheld, the decision will remain in effect for the next four years until the commission meets again in 2024.

In the meantime lawmakers could decide to increase their own pay by passing a new law, but the increase would not take effect until 2023 at the earliest.

The base salary for New York’s 213 lawmakers is currently set at $110,000, plus a per diem for each day they spend at the Capitol in Albany.

The salary for judges is varied based on their bench, with state Supreme Court judges making about $210,000.

The commission’s decision does not affect Cuomo’s raise, which was approved last year under a joint resolution by the state Senate and Assembly.

Three other top officials are also set to receive raises in January – Lieutenant Gov Kathy Hochul, Attorney General Letitia James and Comptroller Tom DiNapoli. Like Cuomo’s, their salary increases are approved by the legislature, not the CLJEC. 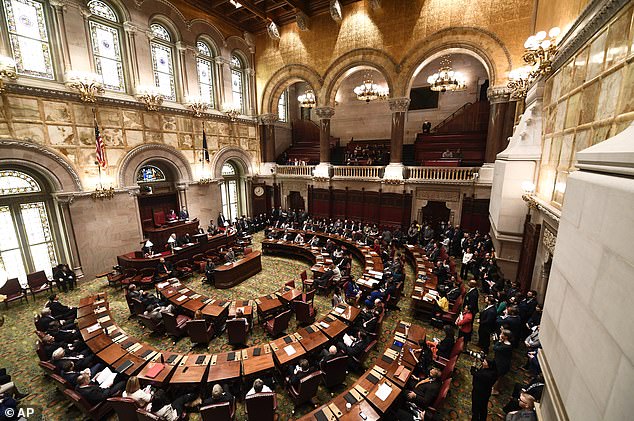 Hopes for raises for New York’s lawmakers, judges and commissioners were dashed on Monday, when the commission that approves pay increases determined there isn’t enough room in the budget to give them out this year due to losses from the coronavirus pandemic

In the face of a rapidly expanding deficit, Cuomo has been lobbying the federal government for additional funding, warning that the state will be forced to make permanent 20 percent cuts to health and education if the aid doesn’t arrive.

‘We don’t have a shovel big enough to dig out of [the deficit], it’s the biggest number in history. We need help from Washington,’ the governor said in a radio interview on Tuesday.

He took a shot at President Donald Trump for failing to provide more funding and said he expects his predecessor Joe Biden to handle things differently.

‘Biden ran, and I know him and I supported and he’s a good man – he will fund state and local governments and we need that to come even close to balancing the budget,’ Cuomo said.

The CLJEC panel emphasized the need for federal funding in its salary report on Monday, echoing Cuomo’s warnings budget cuts.

‘We understand the potential for significant budget cuts may be necessary at the state executive level as well if the federal government does not enact additional funding to address the economic hardship caused by COVID-19,’ the panel wrote.

‘Substantial additional state monies will be needed to deal with the pandemic, including providing face masks, virus tracking, contact tracing, enforcement efforts, and distribution of the hoped for new pandemic vaccine.

‘Simply put the commissioners’ worst fears as articulated in the 2019 Report – a downturn in the state’s finances coupled with an inability to cover increased salary obligations – has unfortunately come to stark reality in the worst possible way.’

Tourism in New York City could take five years to return to normal with new forecasts predicting visitors will only start returning to the Big Apple in mid-2021.

The industry faces being wiped out – along with its $46 billion revenue stream and 400,000 jobs – as the coronavirus pandemic continues to surge throughout the United States.

NYC & Company, the city’s tourism promotion agency, say it is likely to be 2025 before the number of foreign visitors to the Big Apple reaches the 2019 heights – when a record 66.6 million visitors flooded the city, 13.5 million of which were international.

Its CEO, Fred Dixon, told The New York Times: ‘It’s going to be a very slow build initially.’ New York City has recorded more than 287,000 cases of the coronavirus and 24,124 deaths. 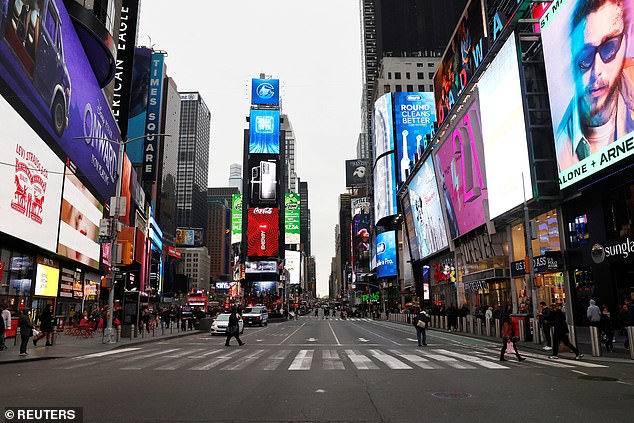 Tourism in New York City could take five years to return to normal with new forecasts predicting visitors will only start returning to the Big Apple in mid-2021.  A nearly empty 7th Avenue in Times Square is seen at rush hour after lockdowns were introduced

Crucial to the rebound is hopes of a vaccine, Dixon said.

On Monday Moderna said its COVID-19 vaccine is proving to be highly effective in a major trial.

A week ago, competitor Pfizer Inc. announced its own COVID-19 vaccine appeared similarly effective — news that puts both companies on track to seek permission within weeks for emergency use in the US.

But the devastation wreaked by the virus so far has already resulted in the shuttering of bars and restaurants as well as the closure of Broadway and hotels since lockdowns began back in March.

Pre-lockdown, up to 12 million people visited NYC in the first three months of the year; since then tourism has struggled to maintain any kind of momentum due to closures and restrictions.

The city may not reach an additional 10 million by the end of 2020. That figure would also include the healthcare workers who arrived in the city to help at the peak of the pandemic.

NYC & Company now predict 38.2 million visitors in 2021; they forecast 69 million by 2024. But the foreign visitors, who spend the most money, are still expected to be on the lower side, hampering the recovery efforts.

International travel is currently banned from a number of nations around the world; quarantine restrictions remain in place for others.

Last month it was confirmed that Broadway will remain shut until at least summer next year.

Dixon added: ‘Many look at Broadway as the dinner bell. As soon as that dinner bell rings, people are going to come far and wide.’ 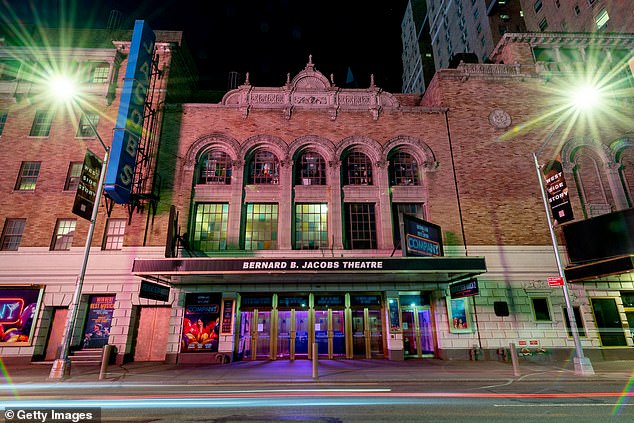 The tourism industry faces being wiped out – along with its $46 billion revenue stream and 400,000 jobs – as the coronavirus pandemic continues to surge throughout the United States. Last month it was confirmed Broadway will stay shut until at least summer 2021

The extended shutdown means New York City will lose out on $14.8 billion in revenue created by Broadway related tourism. At least 97,000 people who work in various theater-related jobs will remain unemployed.

An exact date for curtains to open again has not yet been announced, and producers and labor unions are discussing ways they can reopen safely. Producers are also offering refunds and exchanges for tickets purchased for shows through May 30, 2021.

The Metropolitan Opera said it will skip an entire season for the first time in its nearly 140-year history and intends to return from the pandemic layoff next September.

It was also revealed Sunday that more than 300,000 residents have fled New York City over the last month. The coronavirus pandemic kicked off the migration in March, when rising infections and deaths prompted restrictions that all but shut down the city.

In an interview with Market Watch, New York City Comptroller Scott Stringer noted the 90 per cent decline in tourism in the last quarter of fiscal year in 2020.

‘In the midst of the pandemic, we are starting to realize that our 62 million [annual] tourist visitors will be no more in the short term,’ Stringer told Market Watch.

‘We haven’t lost our mojo as a city, but the pandemic has curbed what we can do to attract people from all over the world.’

The ongoing COVID-19 pandemic has also forced the Rockefeller Center to bar in-person crowds from seeing the famous tree-lighting ceremony on December 2 while it figures out how it will permit visitors to get a glimpse of the illuminated spectacle.

Governor Andrew Cuomo last week announced new restrictions on bars, restaurants, and gyms that went into effect on Friday as the virus makes a resurgence across the state. 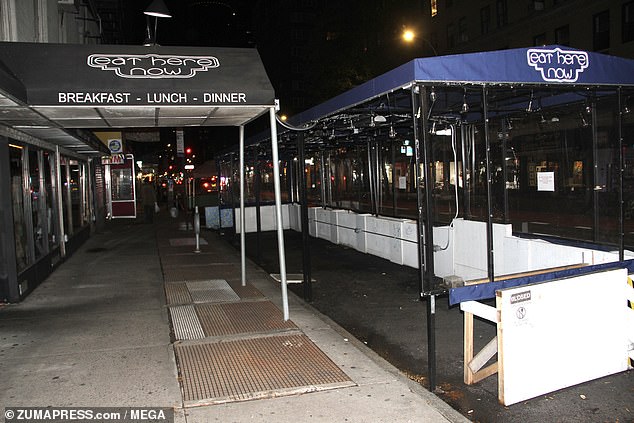 Governor Andrew Cuomo last week announced new restrictions on bars, restaurants, and gyms that went into effect Friday as the virus makes a resurgence across the state

The famous Rockefeller Center ice skating rink will open on November 21, but it will limit the number of people on the ice.

That date is a month later than usual as Rockefeller Center is allowing local restaurants, which have been hard hit during the pandemic, to continue to use the space as an outdoor dining area for a bit longer.

It’s estimated that more than 125 million people typically visit Rockefeller Center during the holidays, but with tourism stalled amid the pandemic, it’s unlikely the usual frenzy will appear this year.

The rink will also close far earlier this season compared to previous years. The last day skaters can pay a visit to the rink is January 17. The annual Christmas Spectacular at Radio City Music Hall, which features the Rockettes, has been canceled.

There will also be no in-person crowds watching the Macy’s Thanksgiving Day Parade, though preparations are underway to stage a modified version that will be broadcast on television.

Last month, Bryant Park opened its Winter Village, though unlike previous years it institute safety protocols to mitigate the spread of the coronavirus.

The Roosevelt Hotel on E. 45th St. in Manhattan permanently closed its doors at the end of October due to the pandemic. The hotel was open for nearly 100 years.