The second-ranking Democrat in the Senate has admitted that they are powerless to stop the confirmation of Amy Coney Barrett to the Supreme Court, unless Republicans change their mind and side with them.

Dick Durbin, who has been on the Senate Judiciary Committee since 1997, told ABC News on Sunday morning that Barrett’s confirmation was all-but guaranteed.

‘We can slow it down perhaps a matter of hours, maybe days at the most,’ he told George Stephanopoulos on This Week.

‘But we can’t stop the outcome.’ 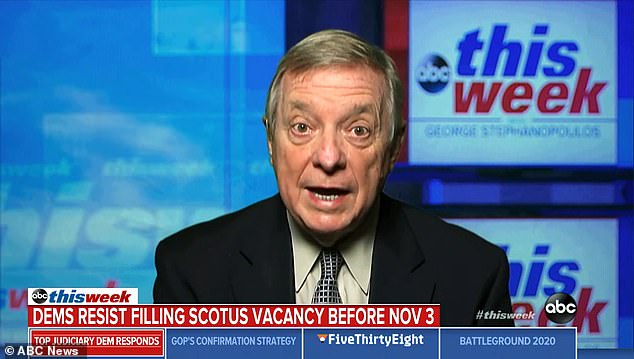 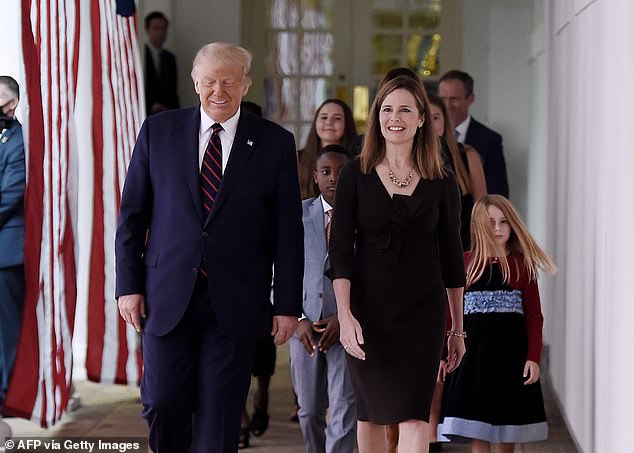 Barrett, 48, was nominated by Donald Trump on Saturday to fill the Supreme Court seat left vacant following the death of Ruth Bader Ginsburg.

Democrats have furiously challenged her appointment, arguing that a Supreme Court seat should not be filled in an election year.

Trump and Mitch McConnell, the Senate leader, are determined to press ahead with the conservative appointment.

Lindsey Graham, the chair of the Judiciary Committee, said on Sunday that the vote to confirm Barrett will be held on October 22.

Some Democratic senators are already claiming they will not meet with Barrett as her nomination moves to the Senate floor next month, claiming her ‘extreme’ views are not suited for the Supreme Court.

‘I will not meet with Judge Amy Coney Barrett,’ Senator Kirsten Gillibrand said in a tweet Sunday afternoon. ‘This nomination process is illegitimate.’

The New York Democrat added: ‘I refuse to participate in the further degradation of our democracy and our judiciary.’

Democratic Senators Richard Blumenthal of Connecticut and Mazie Hirono of Hawaii joined in Gillibrand’s sentiment earlier in the day Sunday.

‘I will oppose the confirmation of Judge Amy Coney Barrett, as I would any nominee proposed as part of this illegitimate sham process, barely one month before an election as Americans are already casting their votes,’ said Blumenthal.

‘Americans deserve a voice in this hugely consequential decision.

‘Judge Barrett’s views would harm real lives – real people – in real ways, from children with pre-existing conditions to women who just want to be able to decide when & how to have a family,’ he continued.

‘I’m fighting for them.’ 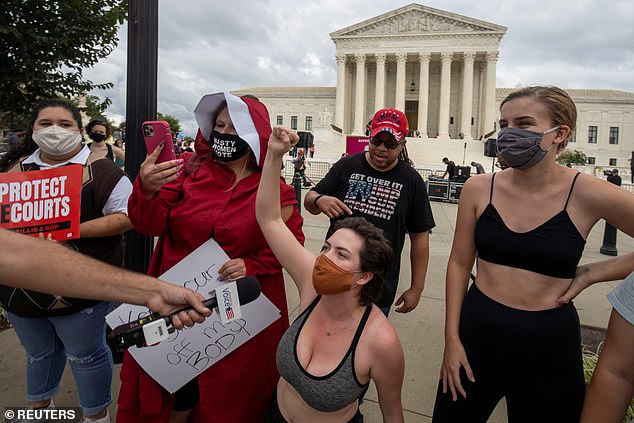 Protestors demonstrate outside the U.S. Supreme Court on Sunday 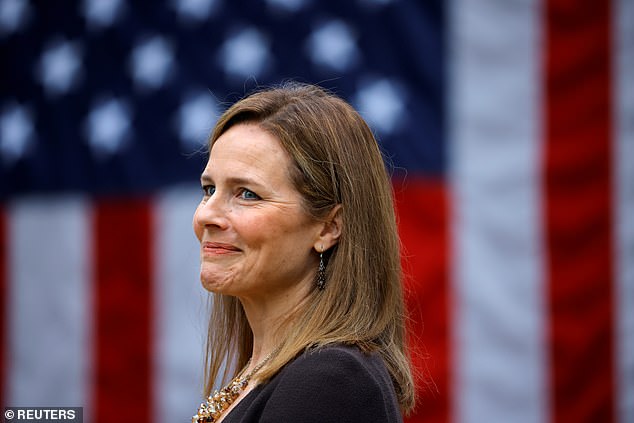 Blumenthal and Hirono agreed that Barrett was chosen by Trump because of her ‘commitment to striking down the Affordable Care Act’ and ‘overturning Roe v. Wade.’

‘I will not support the nomination of Amy Coney Barrett to the Supreme Court for the following reasons: She will vote to strike down the Affordable Care Act after being rushed on the Supreme Court in time to hear the case on November 10,’ Hirono tweeted.

‘Millions of Americans will lose their health care – catastrophic in the middle of a pandemic.’

She shared her second reason as part of her Twitter thread Sunday: ‘She has a long history of being anti-choice and an explicit willingness to reverse SC precedent – endangering the protections of Roe v Wade. A woman’s right to control her own body is at stake.’

Durbin, however, said he would meet with Barrett, and rejected calls to boycott her confirmation hearings. 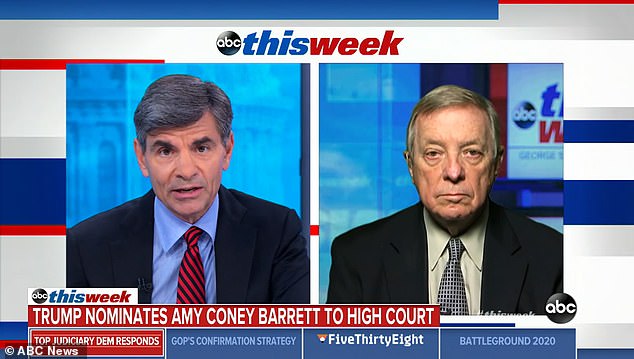 Durbin said he did not support calls to boycott Barrett’s hearings, which will begin in October

‘I’ve met with every Supreme Court nominee since I’ve been in the Senate,’ he told Stephanopoulos.

‘I will extend that courtesy, if she requests it, for at least a socially distanced, safe meeting, perhaps over the phone.

‘I want to be respectful. We disagree on some things. And in terms of participating in the Senate Judiciary Committee hearing, I’ll be there to do my job.’

‘We’re talking about someone who will be on the highest court in the land for the remainder of her life, and I take that seriously,’ he said.

The 75-year-old senator, representing Illinois, said he wants to ask Barrett ‘point-blank’ about her position on ending the Affordable Care Act.

He also said he supports calls to reform the nominating process, and potentially add more justices to the nine-person court.

Asked about Trump’s wish to have a conservative court in place in case of a contested election result, Durbin said he backed calls for Barrett to promise to recuse herself, were that to happen.

‘I certainly wish she would, it would help matters,’ he said. ‘And it would evidence the fact that she wants to be fair in addressing this.’

Durbin refused, however, to back Hillary Clinton’s calls for Joe Biden to not concede the election.

Clinton said last month: ‘Joe Biden should not concede under any circumstances because I think this is going to drag out, and eventually I do believe he will win if we don’t give an inch and if we are as focused and relentless as the other side is.’

Durbin said he disagreed with her point of view.

‘I respect her, I like her. But I think she’s just flat-out wrong,’ Durbin said. ‘The election itself is going to be announced, the winner will be announced at some point.

‘If we are going to maintain a democracy, peaceful transition through an election is the only way to do it.

‘Whoever the winner is, if it is clear and legal, that should be announced and the other party should concede.’