A trove of the most coveted items from Hollywood’s past, including Elvis Presley’s diamond-studded ‘TCB’ ring and Michael Jackson’s Swarovski crystal embellished glove, will be auctioned off this month.

More than 300 artifacts will be sold to the highest bidder through GWS Auctions, a company that specialized in celebrity-owned assets, high profile pieces and royal family estates.

Initial bidding for The Hollywood & Music auction began November 8, but won’t officially open until November 28 at 10am.

Fans of The King of Rock & Roll can purchase everything from a lock of Presley’s black hair to a pill bottle he used in 1958 at Fort Hood, where he underwent training for seven months while in the U.S Army. 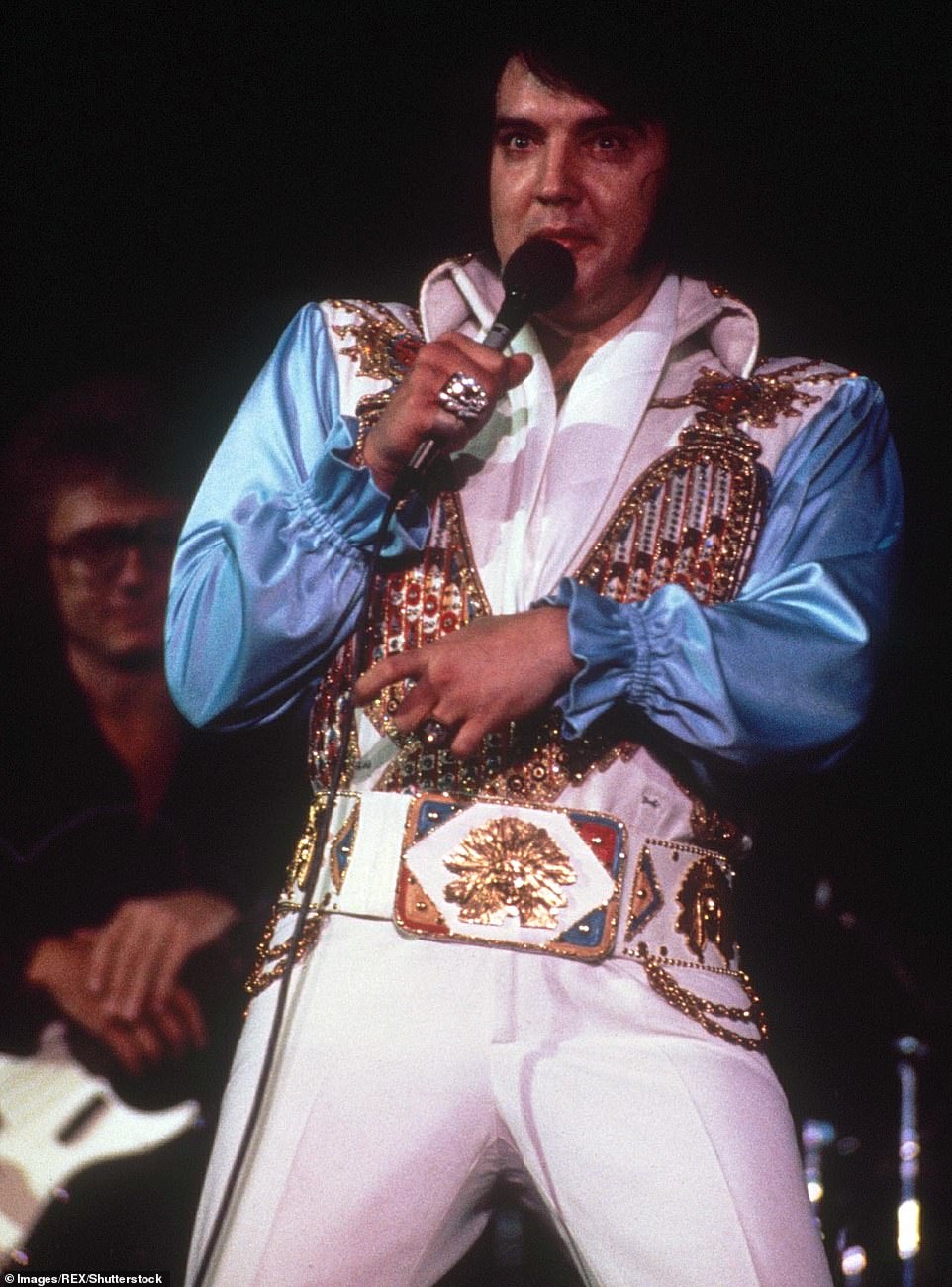 Artifacts from Elvis Presley (pictured), the King of Rock & Roll, will be auctioned on November 28 through GWS Auctions, a company that specialized in celebrity and high-profile items 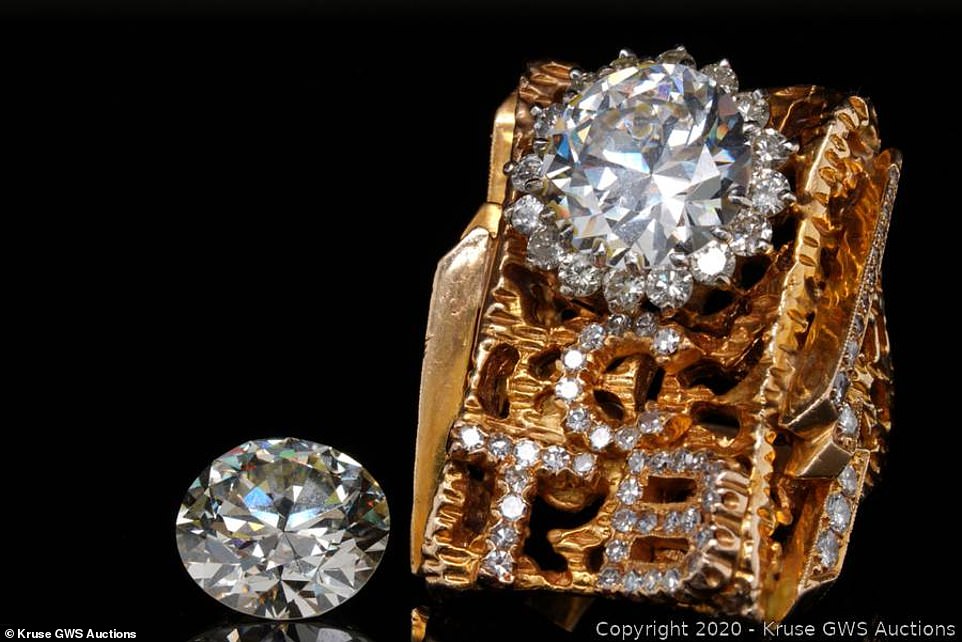 GWS Auctions: ‘This ring was worn and loved by Elvis until he gave it to J.D. Sumner on stage during the first night of the Ashville concert in 1975 in front of more than 14,000 people’ Pictured: the first ‘TCB’ ring worn by Elvis Presley

But Presley’s custom-made TCB – or Takin’ Care of Business – ring may be the collection’s biggest steal. The name referred to the professional musicians who played with him from 1969 until his death in 1977.

TCB was also a well-known personal motto for the ‘All Shook Up’ singer.

‘The ring was custom made for the King, and is crafted of solid 14k yellow gold in Elvis’ preferred “nugget” motif,’ GWS Auctions wrote.

‘This is the very first TCB ring that Elvis had made with the now infamous logo, and has never been offered at auction or for public sale.’

According to GWS Auction, the ring was gifted by Presley to J.D. Sumner, a longtime friend, singer and music promoter.

‘This ring was worn and loved by Elvis until he gave it to J.D. Sumner on stage during the first night of the Ashville concert in 1975 in front of more than 14,000 people,’ GWS Auctions wrote. 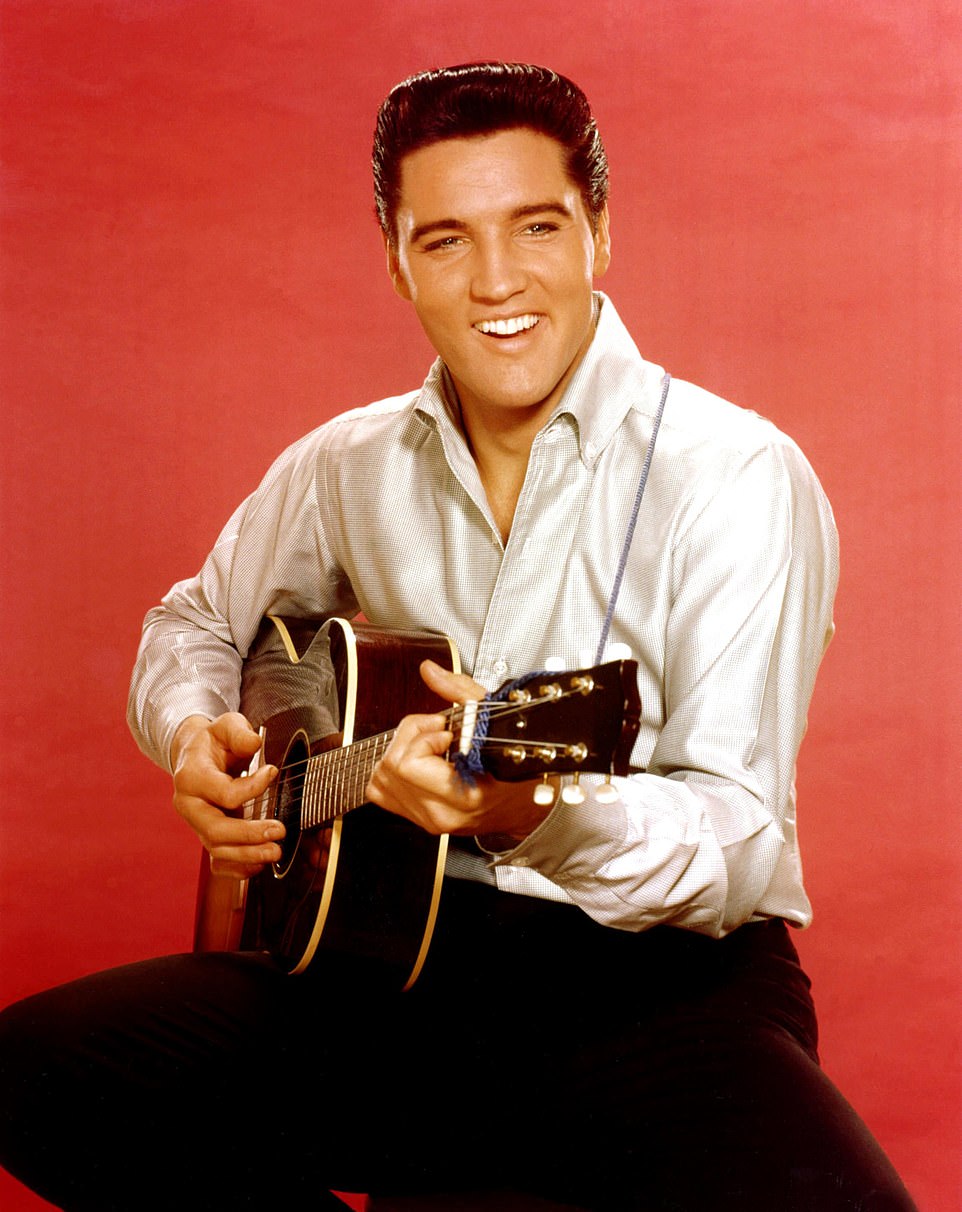 A collection of homemade films of Presley will also be auctioned off next week, and showed him fishing with family at the start of his legendary superstardom 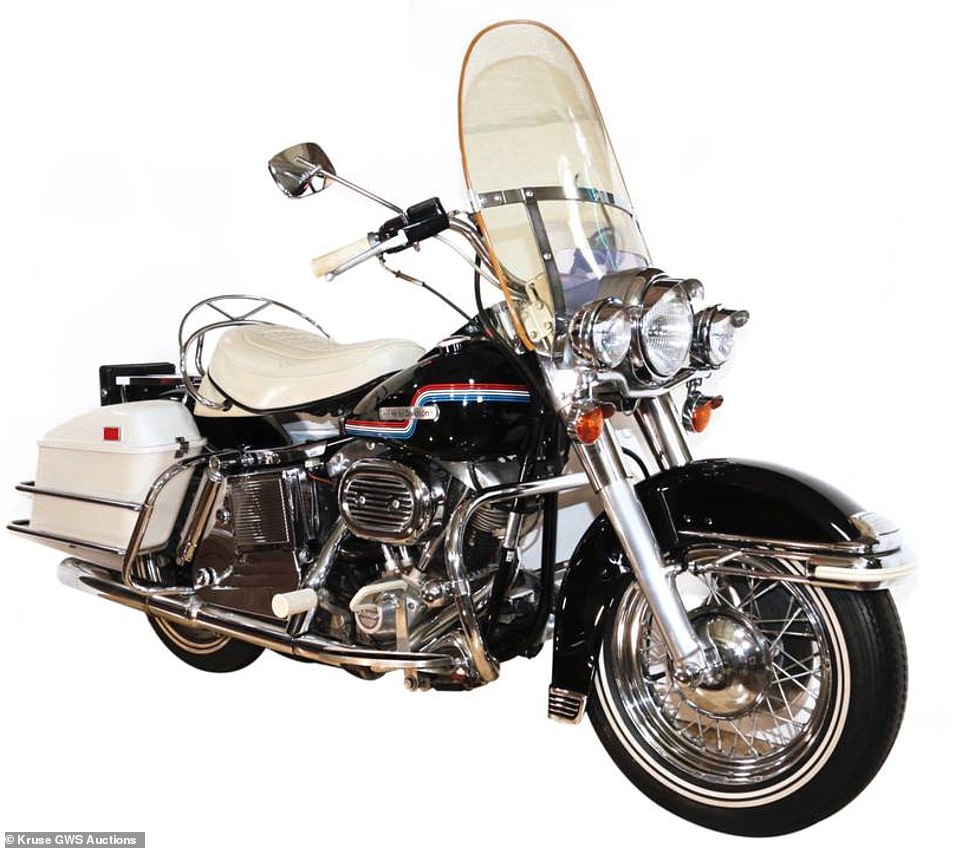 Pictured: Elvis Presley’s 1975 Harley Davidson FLH Motorcycle that will be auctioned on November 28

‘Elvis gave him this ring the day before his father Vernon joined the concert tour. Elvis, knowing that his father would miss the ring, sent an assistant to borrow it from J.D., put the ring on, and in front of Vernon complained that it was not fitting his finger properly.

‘Elvis then took it off and gave it to the aide, telling him to “put it up”, and the aide returned the ring to J.D. and Elvis had a replica made by his jeweler so that Vernon Presley would not know that J.D. Sumner had the original one.’

‘This is arguable the most significant and well documented piece of Elvis’ jewelry on the planet, as even Graceland has not had a piece of this magnitude,’ the company added.

Other items being sold included Presley’s 1975 Harley Davidson FLH Motorcycle, as well as a homemade films of the singer taken during the summer he achieved stardom.

‘What’s so beautiful about these videos is it’s just him being a son, a family member on vacation with the people he loves,’ Kruse, founder of GWS Auctions, told People.

‘This is right before he really hit it big, his life was about to change forever. So they’re just phenomenal. There’s never been anything offered quite like this.’

Presley was seen in four of the six films, in which he relaxed with family during a 1956 fishing trip.

The films were initially taken on 8mm film, but were converted onto a DVD with 15 and 20 different clips. They’re expected to auction for $10,000.

‘The largest drawer houses a black and gold antique Royal typewriter which was gifted to Miller by his wife Marilyn Monroe, which fits perfectly on the pull out desk,’ GWS Auctions wrote.

‘This piece was originally owned by Miller and was later acquired by The Incomparable Hildegarde in the late 1980s as part of a movie memorabilia auction, listed as “Arthur Miller Marilyn Monroe Secretary Desk.”‘ 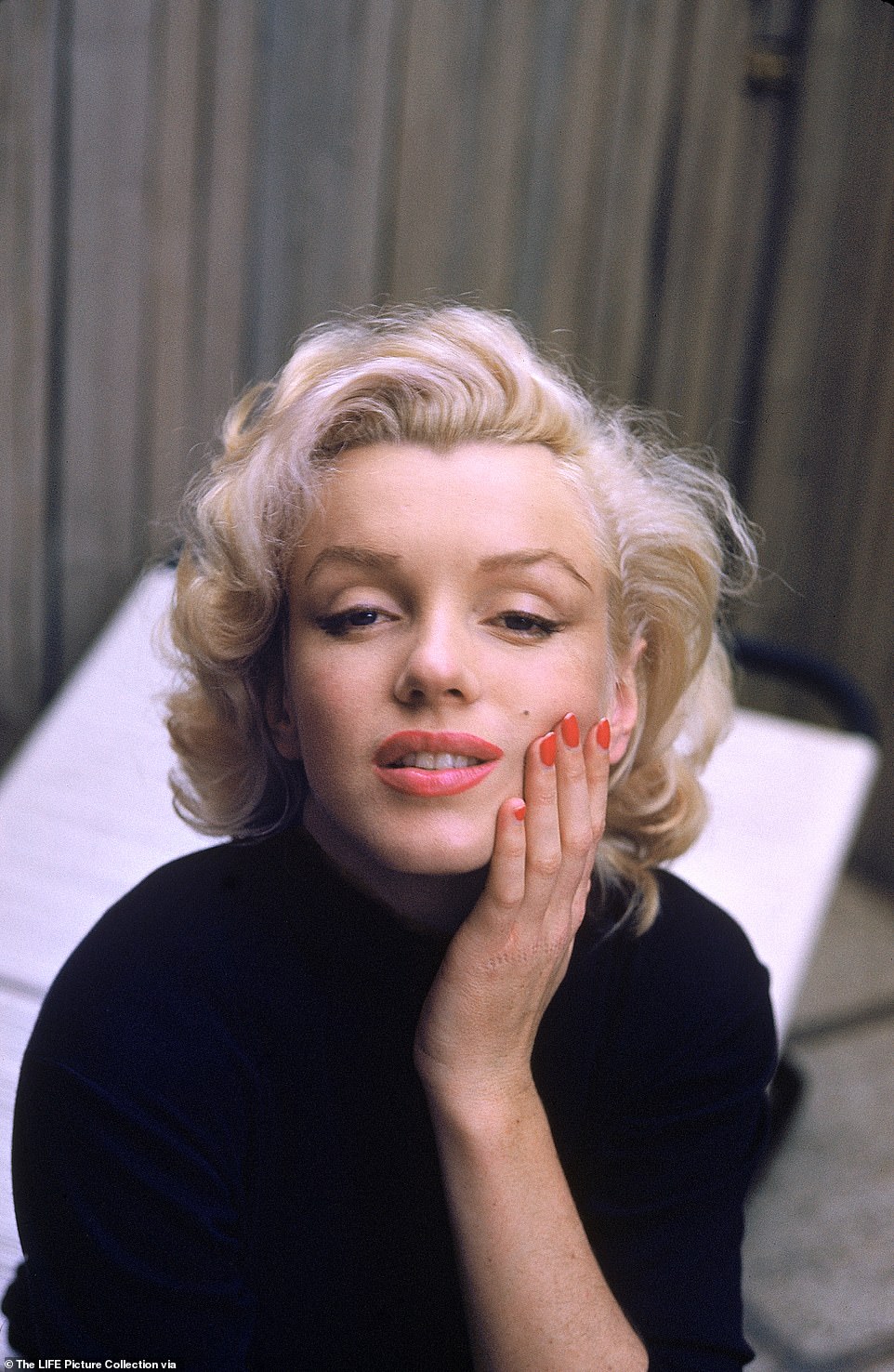 A Louis Vuitton trunk that belonged to Marilyn Monroe’s (pictured) final husband, Arthur Miller, had a minimum bid of $7,500 as of Thursday 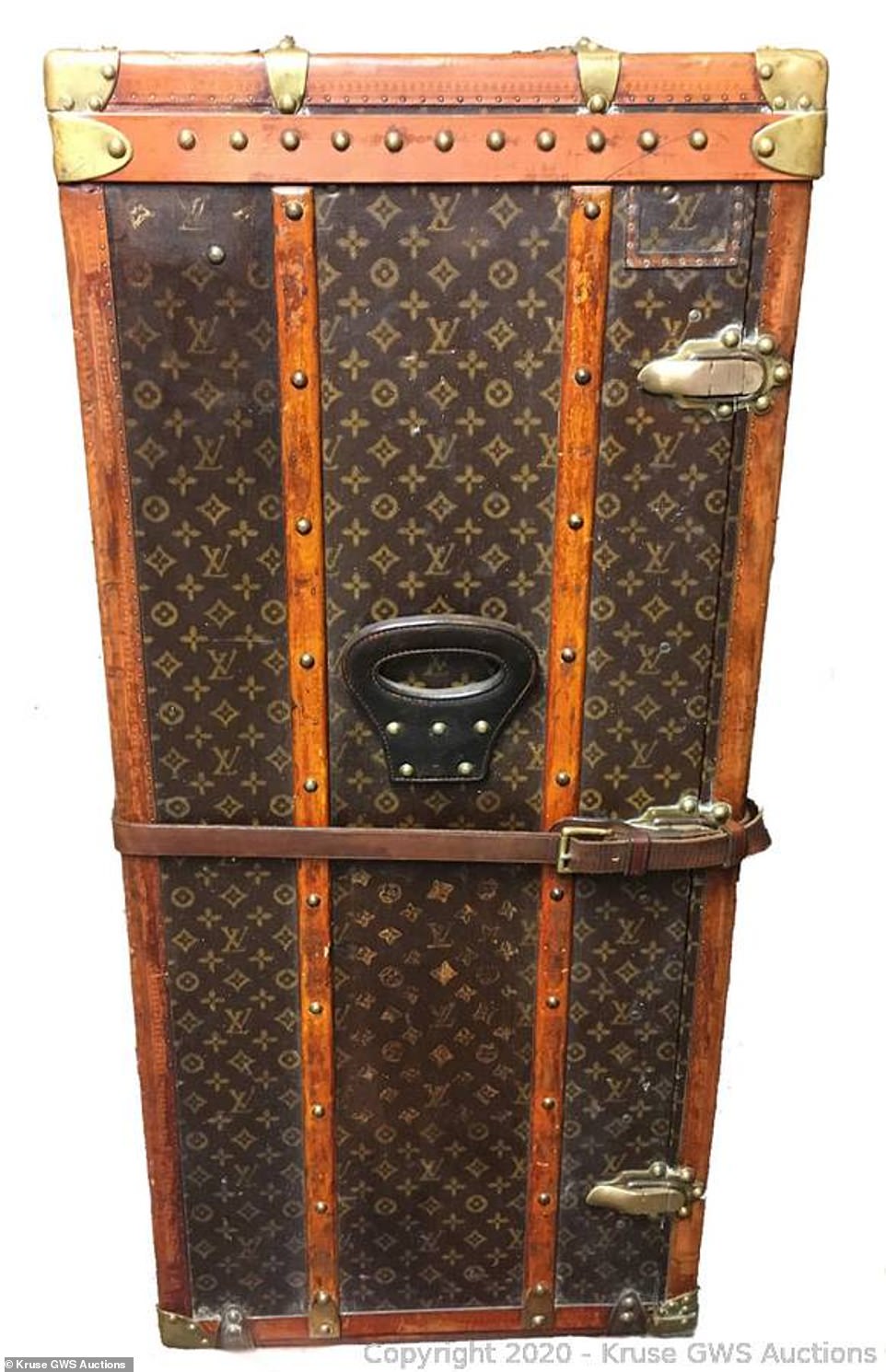 The high-end Louis Vuitton trunk was number 24 of the 29-piece set that Marilyn Monroe and her husband, Arthur Miller, owned during their five-year marriage 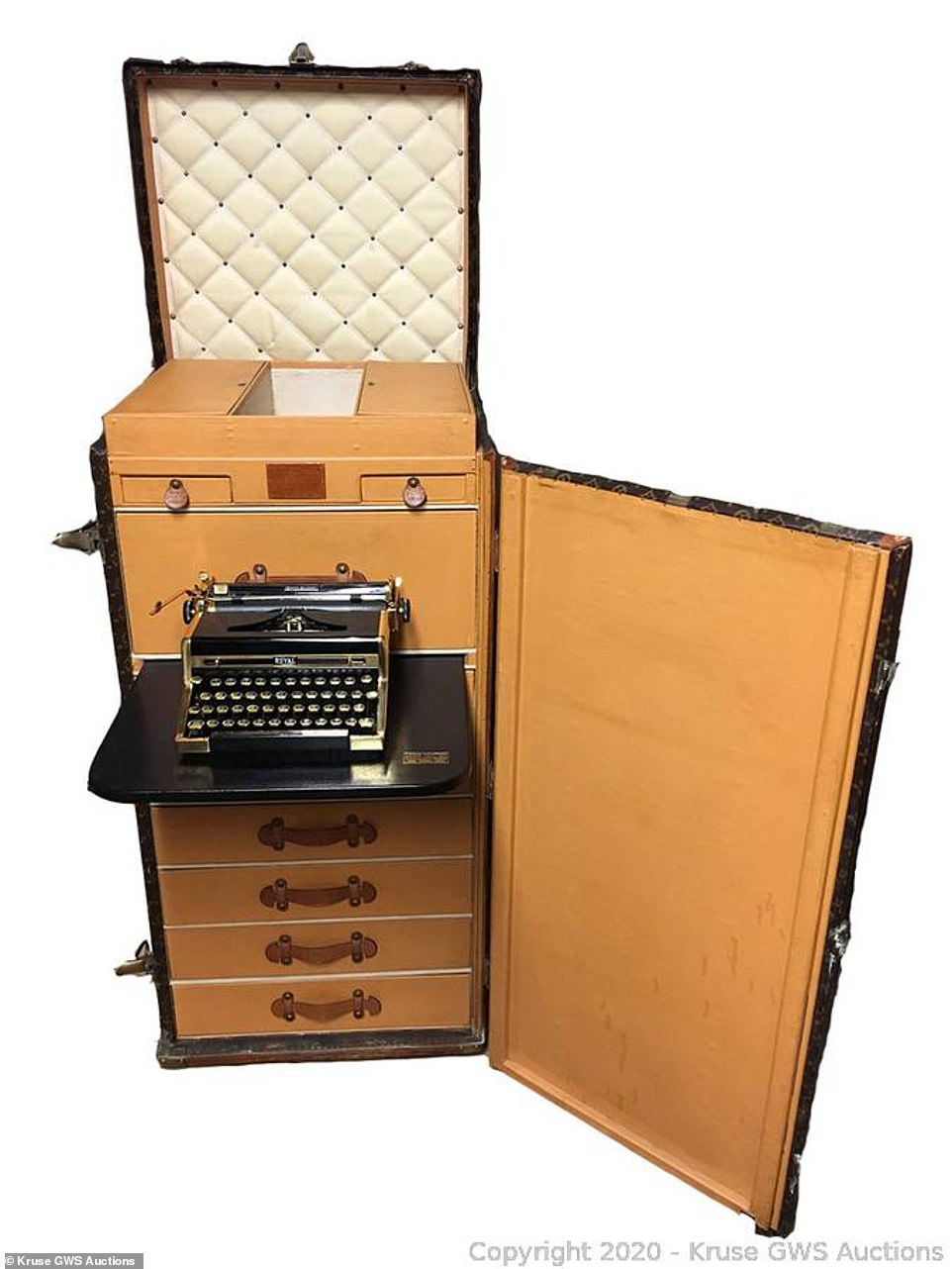 GWS Auctions: ‘The largest drawer houses a black and gold antique Royal typewriter which was gifted to Miller by his wife Marilyn Monroe, which fits perfectly on the pull out desk’ 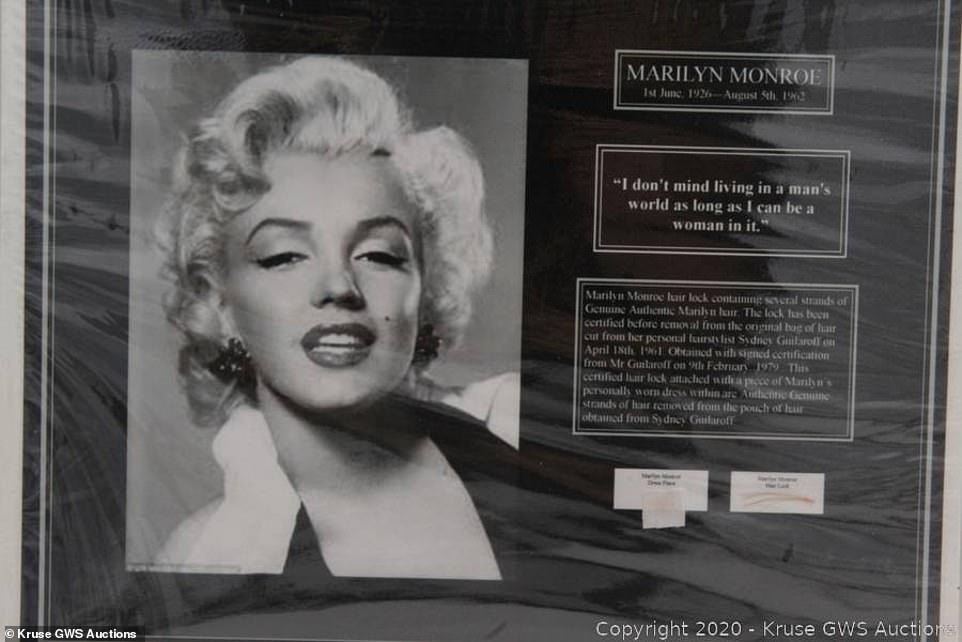 Super fans can start a bid war over a lock of Marilyn Monroe’s hair, which was kept inside a clear frame alongside some documents

The Louis Vuitton trunk is number 24 of the 29-piece collection.

Similar to Presley, ardent fans of Monroe can also purchase a lock of her blonde hair kept within a protective frame.

‘This is a genuine lock of hair which was cut from Marilyn Monroe by her hairstylist Sydney Guilaroff. Guilaroff was a hair stylist during Hollywood’s Golden Age who was the first to receive on-screen credit in films,’ GWS Auction wrote.

The ‘Some Like it Hot’ actress was married to Miller for five years before they divorced in 1961 – just months before Monroe died of a barbiturate overdose inside her home.

Before that, she had a brief marriage to baseball star Joe DiMaggio after divorcing from James Dougherty in 1946.

One of the most recognizable pieces from the TV series were rainbow-themed suspenders worn by Mork, an extraterrestrial who lands on planet in Earth.

‘Robin Williams wore these types of suspenders throughout the production, a signature look which he made a fashion trend,’ GWS Auction wrote.

Bidding for the special suspenders began at $250, but rose to $600 as of Monday evening. 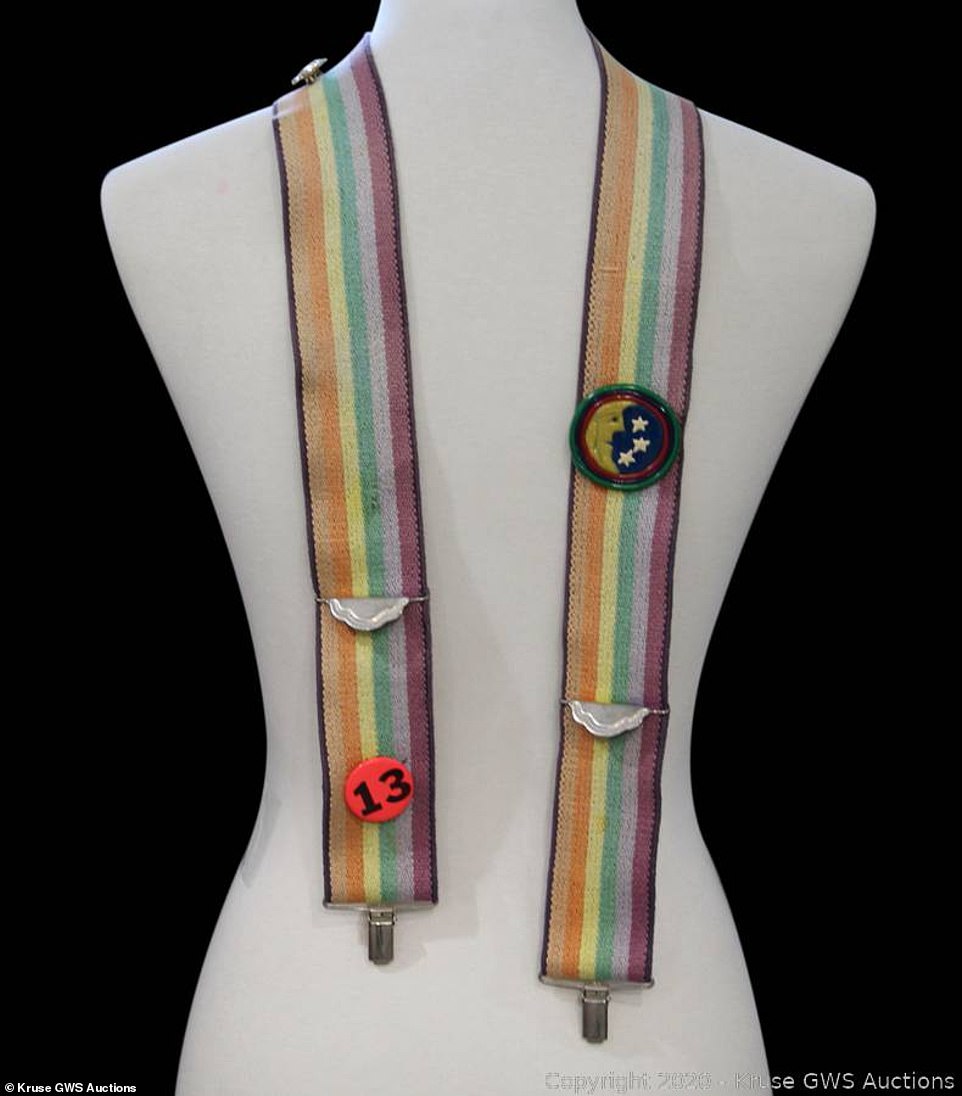 The rainbow-themed suspenders from the popular TV series Mork & Mindy, a spinoff of Happy Days, were worn by Robin Williams throughout the show 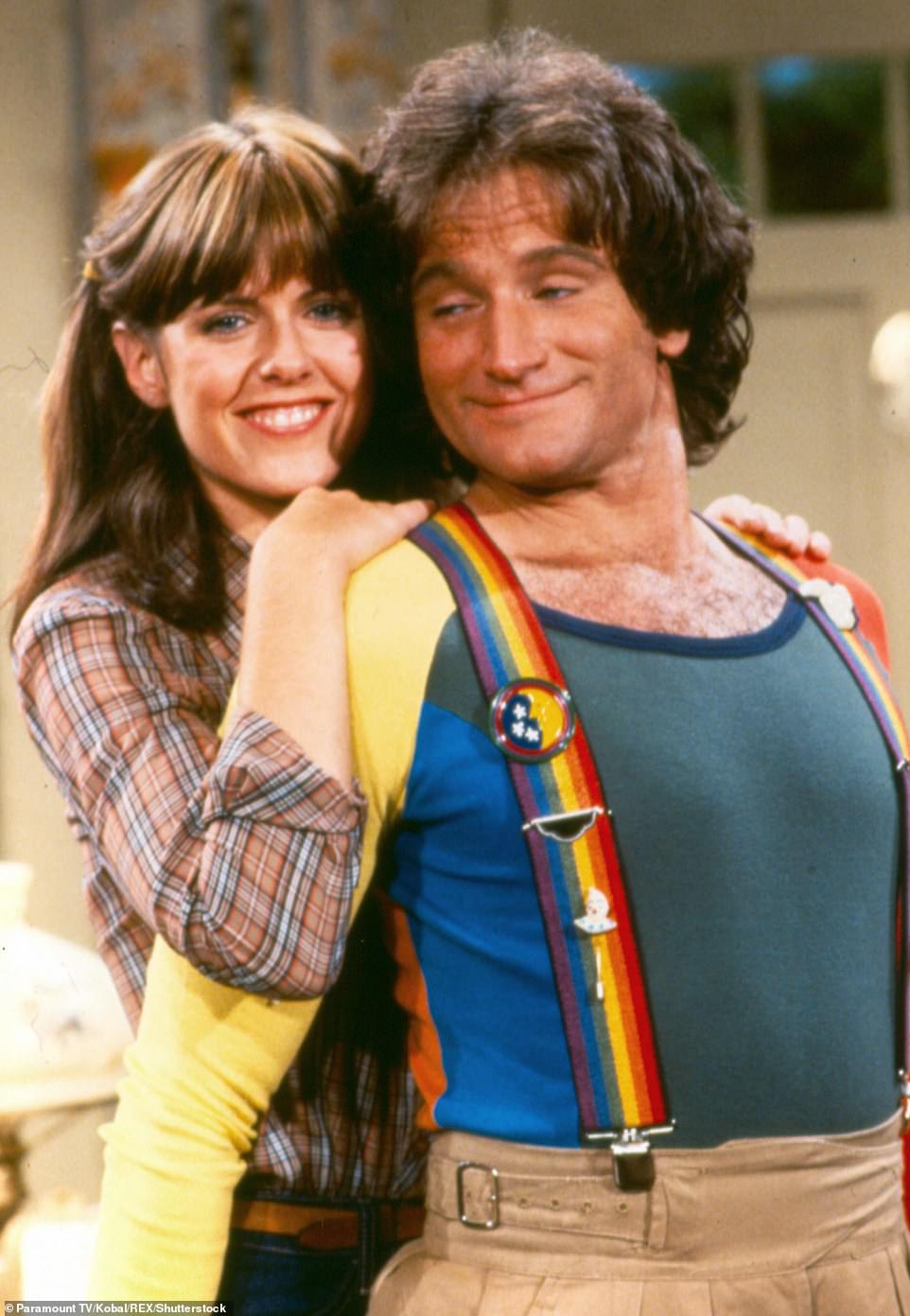 Williams went on to star in numerous blockbuster hits, including Dead Poets Society and Disney’s Aladdin, before staring in his final role, ‘Absolutely Anything.’

In 2014, Williams committed suicide by hanging inside his Pasadena, California, home.

His widow later said that Williams’ death was due to Lewy body dementia, a disease that causes a decline in reasoning, thinking and independent function.

‘This was a very unique case and I pray to God that it will shed some light on Lewy bodies for the millions of people and their loved ones who are suffering with it. Because we didn’t know. He didn’t know,’ Susan Schneider Williams told ABC News.

Also being shown off at the high-profile auction are items from legendary singers, Prince and Michael Jackson.

The white lace blouse worn by Prince donned during his iconic Purple Rain Stage Tour that sold over 1.7million tickets between 1984 and 1985.

Purple Rain also referred to his 1984 film with the same name, which won an Oscar for the original score and was inducted into the Library of Congress for its cultural contributions.

‘The shirt has a sewn-in label with “PRINCE” in purple, and comes with a handwritten letter of provenance signed “Simon Edwards”, which states that the shirt was given by Prince in 1985 and is “in the same condition today as it was when I got it,’ GWS Auctions wrote. 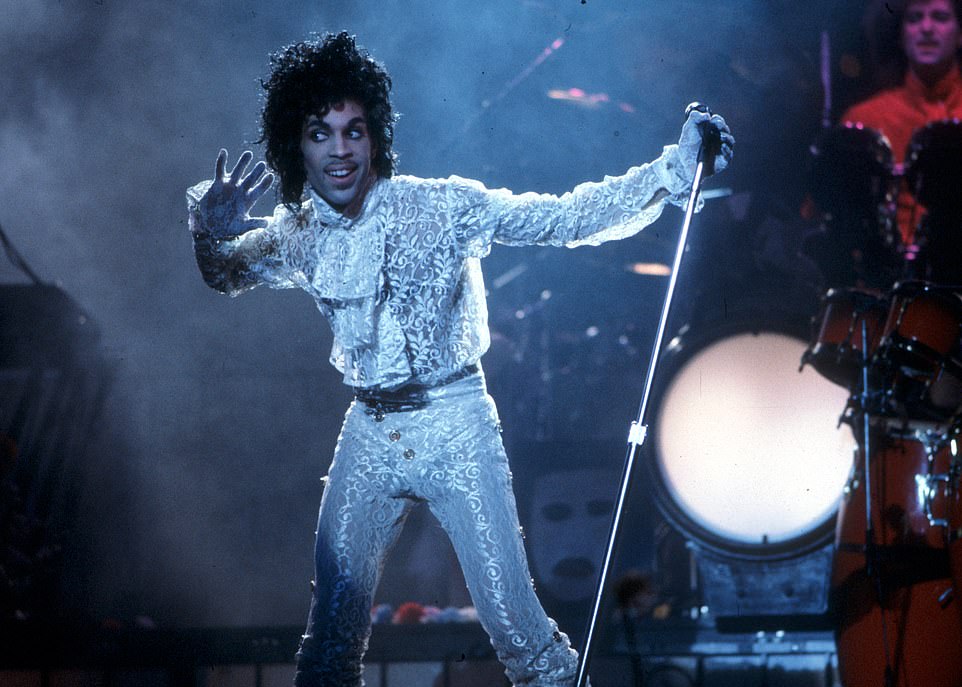 Pictured: Prince performs live at the Fabulous Forum on February 19, 1985 in Inglewood, California, while wearing the lace blouse from the Purple Rain tour 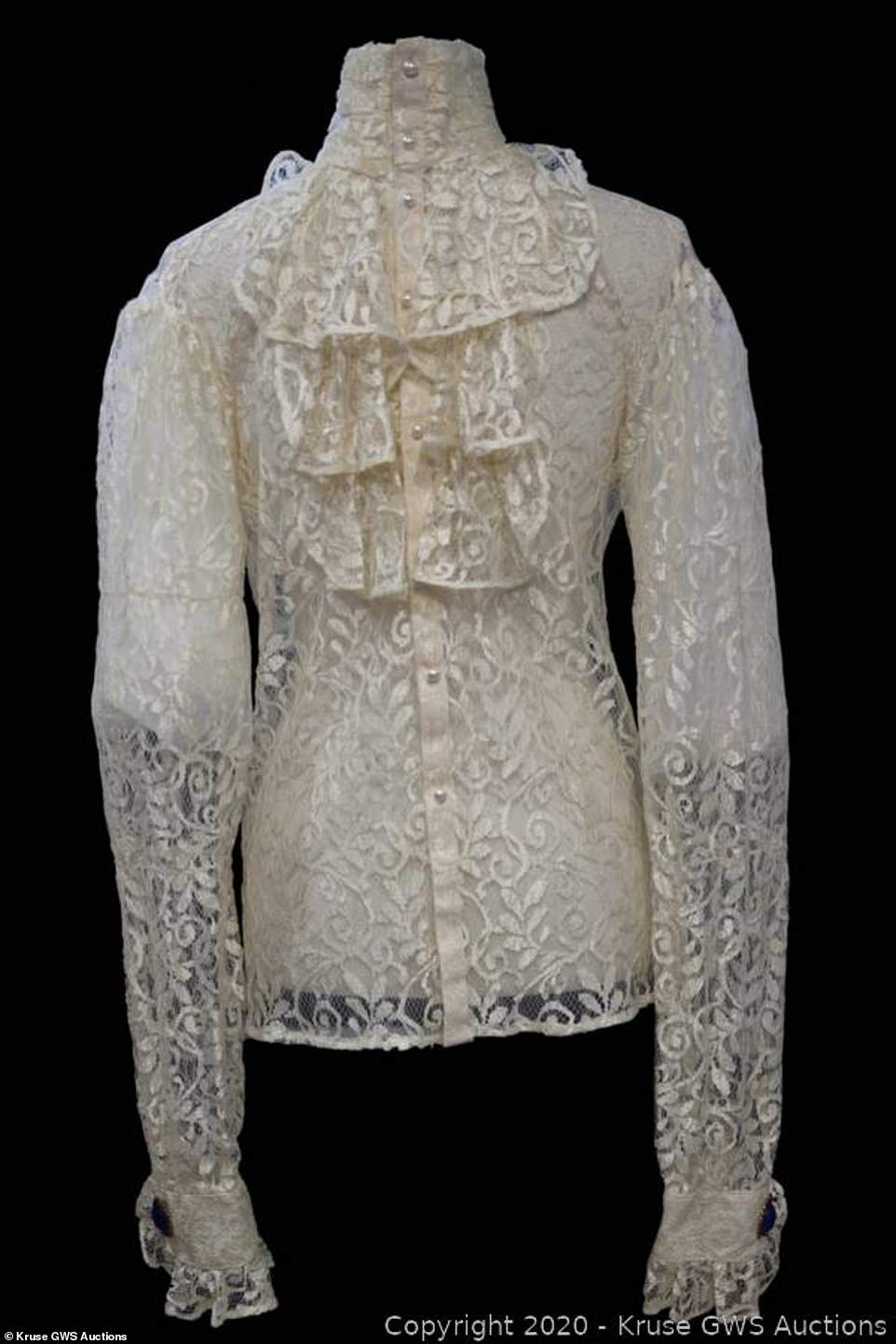 GWS Auctions: ‘The shirt has a sewn-in label with “PRINCE” in purple, and comes with a handwritten letter of provenance signed “Simon Edwards”, which states that the shirt was given by Prince in 1985 and is “in the same condition today as it was when I got it’ 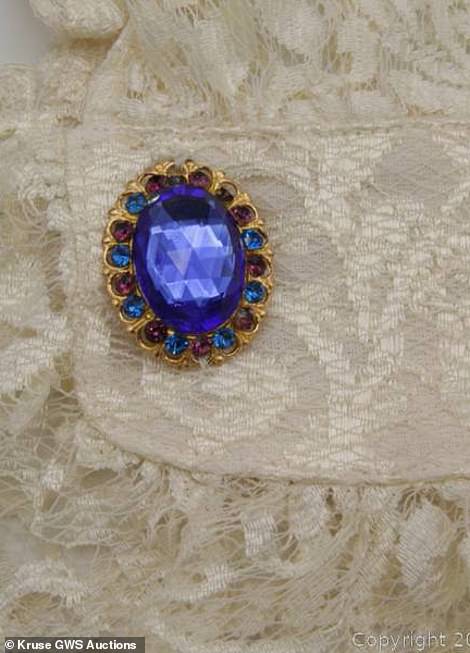 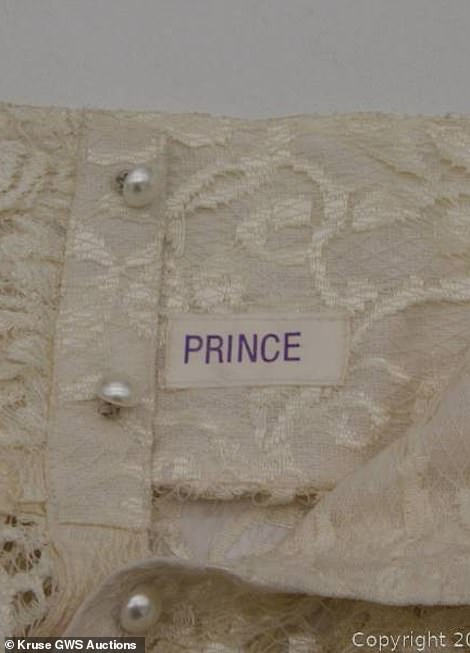 Prince wore the iconic lace blouse during his iconic Purple Rain Stage Tour that sold over 1.7million tickets between 1984 and 1985

In Michael Jackson’s collection, fans can fight over his classic, custom made Swarovski Crystal glove created by Bill Whitten.

The glove is adorned with hand-sewn Swarovski lochrosen crystals and worn by the King of Pop during many of his high-profile performances.

‘Michael Jackson memorabilia is some of the most collectible celebrity memorabilia in the world, and pieces attributed to Bill Whitten can be considered at the top of the tier due to the rarity and quality of the items,’ GWS Auctions wrote.

‘A similar glove made by Bill Whitten recently sold at an August auction for $112,500.’ 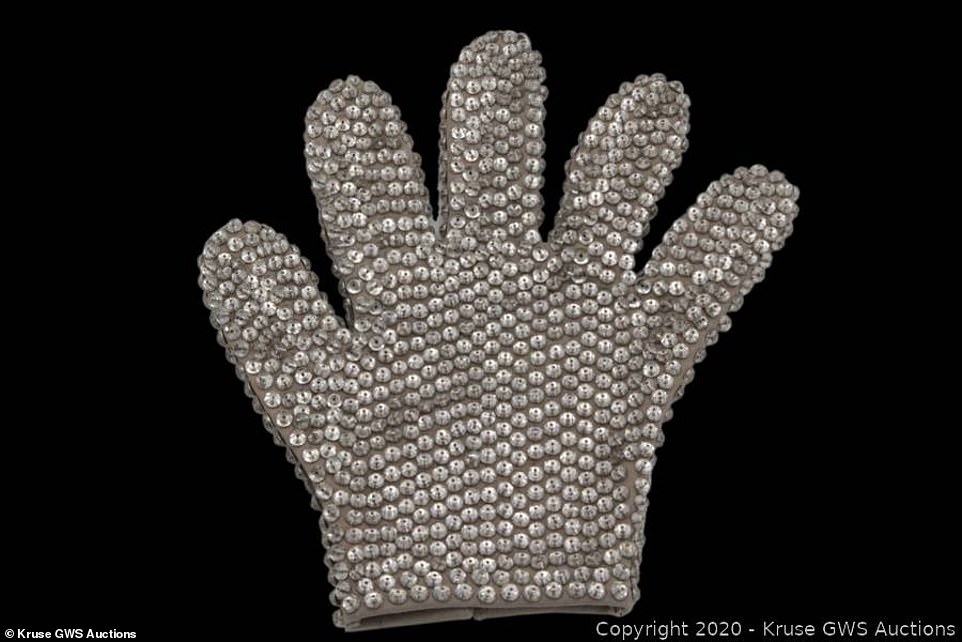 Michael Jordan’s Swarovski Crystal glove, created by Bill Whitten, will be auctioned off with a minimum bidding price of $5,000 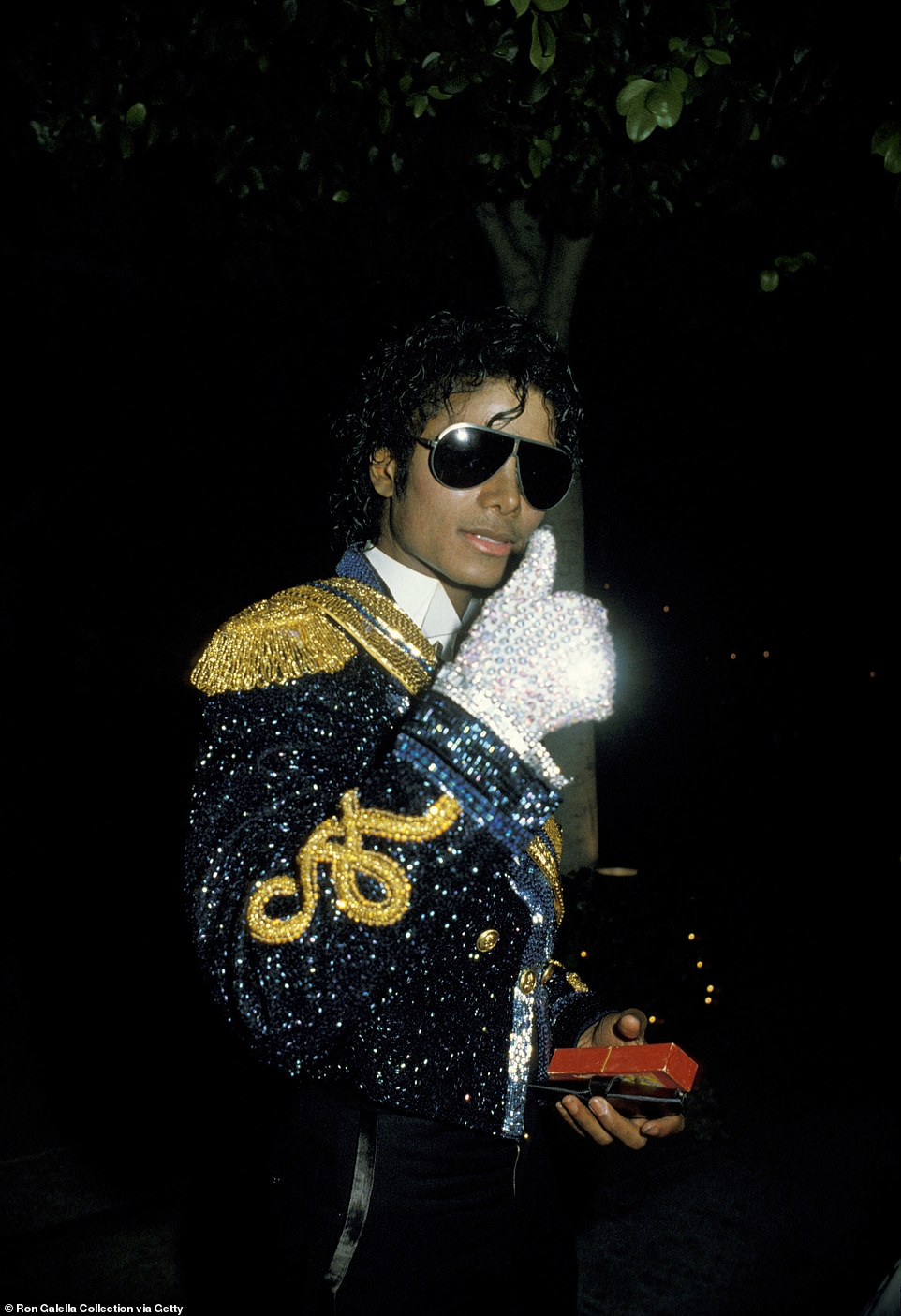 GWS Auctions: ‘Michael Jackson memorabilia is some of the most collectible celebrity memorabilia in the world, and pieces attributed to Bill Whitten can be considered at the top of the tier due to the rarity and quality of the items’ 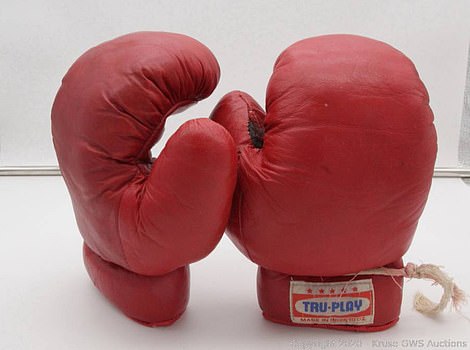 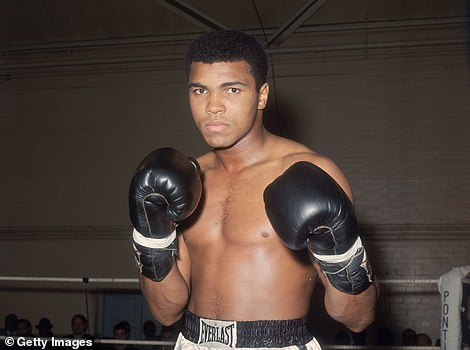 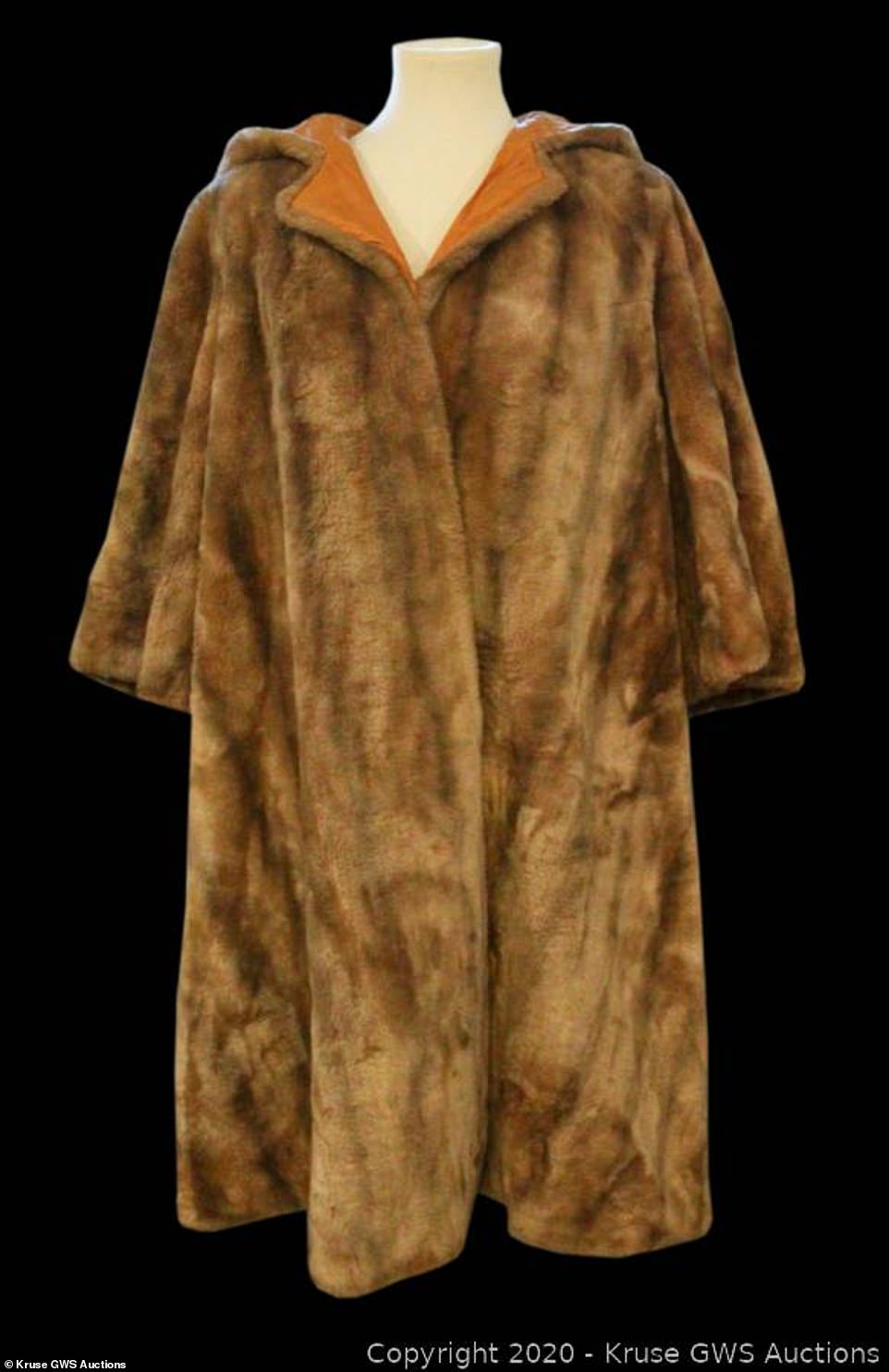 The previous owner told GWS Auctions that their mother worked with Bill Whitten and the gloves were ‘somewhat as a “thank you” gift,’ the statement read.

Michael Jackson rose to international fame as a child as part of the Jackson 5, before venturing into a solo singing and acting career.