Manhattanites looking to dine out in the cool, fall weather while keeping a distance from others can now do so thanks to bubbles that protect up to six customers from the wind, rain, and COVID-19.

The French restaurant Cafe du Soleil on the corner of Broadway and West 104th on Manhattan’s Upper West Side placed transparent tent bubbles over each dining table in the outdoor eating section.

The eatery erected 18 geodesic domes, or ‘space bubbles,’ along its outdoor dining area on the pedestrian sidewalk so that customers won’t be scared away by the fall elements.

Each space bubble, which is made out of clear plastic, is 7ft tall and has enough room to sit six customers, according to Time Out New York.

The bubbles make it feel 10 degrees warmer for diners brave enough to step outside during the fall. 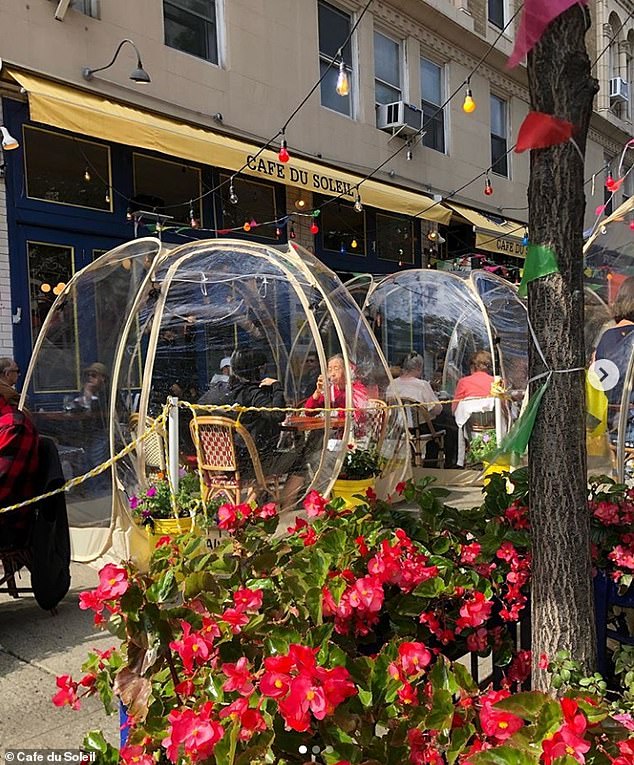 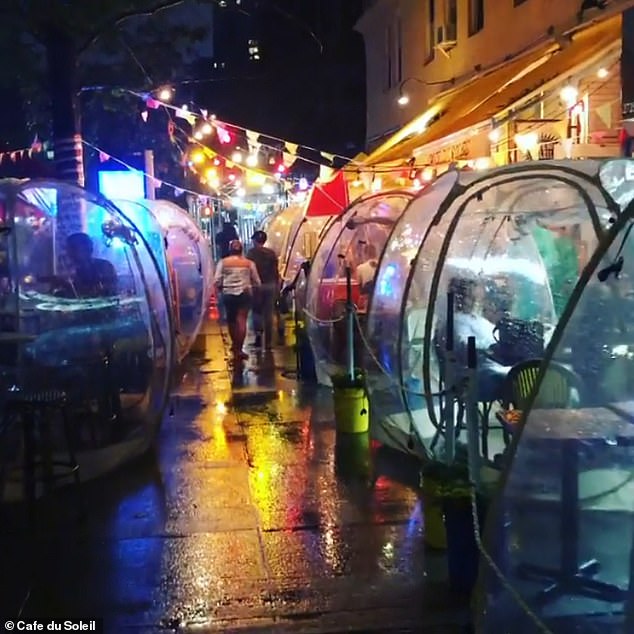 The space bubbles keep out the rain and the wind, which will be helpful to diners who visit the French bistro during the fall months 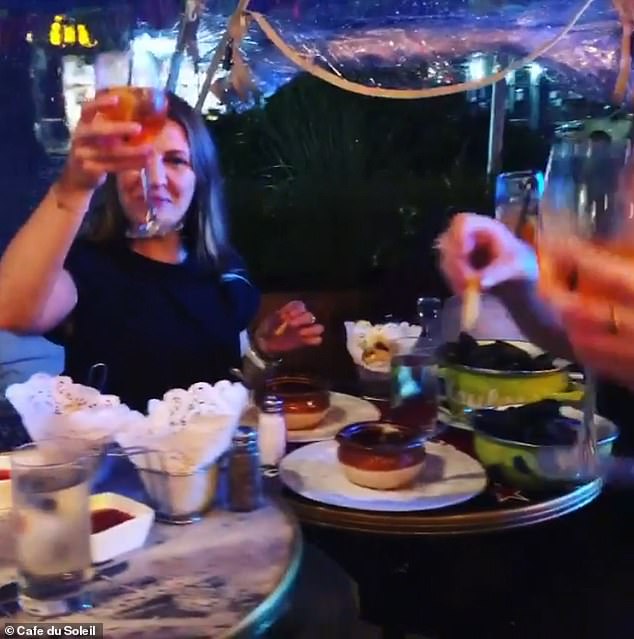 Each space bubble, which is made out of clear plastic, is 7ft tall and has enough room to sit six customers

By law, restaurants in New York are not permitted to seat diners indoors until at least the end of the month.

Beginning on September 30, restaurants who serve customers indoors can only fill the area up to 25 per cent capacity due to ongoing restrictions aimed at preventing a renewed outbreak of COVID-19 in the New York metropolitan area.

‘We had to reinvent ourselves. Even before dining could come back, we had to figure how to survive.’

Rousselot said that the restaurant has had to improvise in the age of COVID-19. A few weeks ago, when the forecast called for rain practically every day of the week, he placed three space bubbles in the outdoor dining area.

The diners loved it, he said. 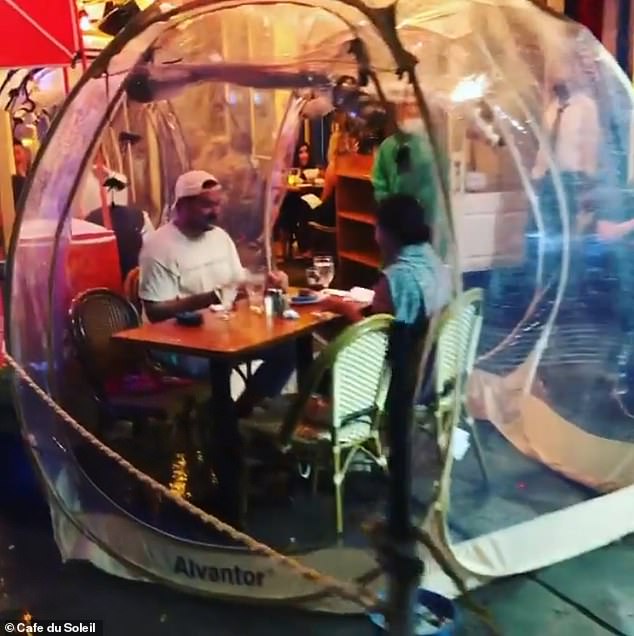 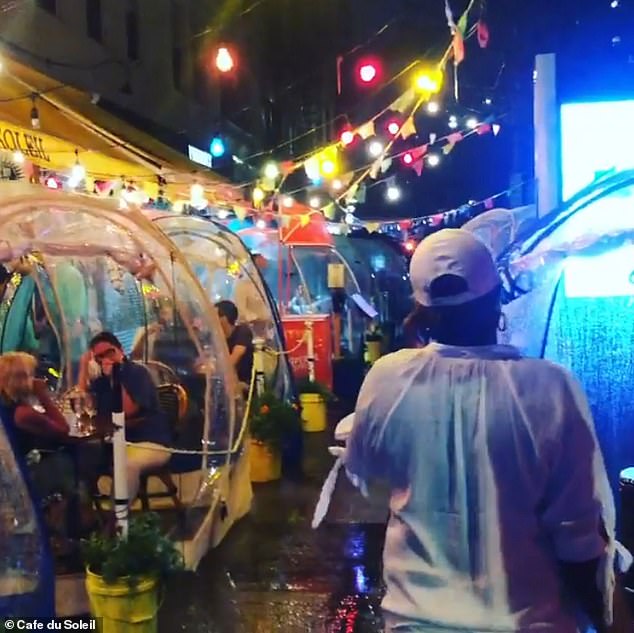 The space bubbles are made of clear plastic, which makes it impossible to heat during the winter months 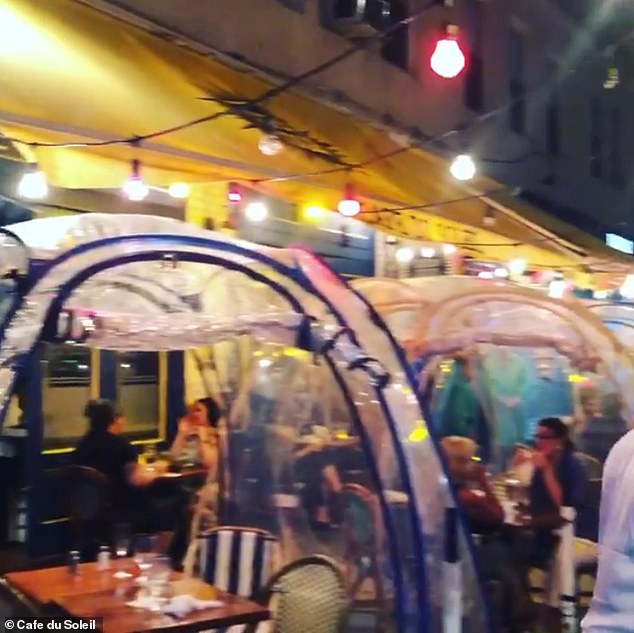 The eatery erected 18 geodesic domes, or ‘space bubbles,’ along its outdoor dining area on the pedestrian sidewalk so that customers won’t be scared away by the fall elements

‘You can pop in and pop out,’ according to Rousselot.

The space bubbles are a stopgap solution for the autumn, so diners can eat outdoors at the restaurant for at least the next few months.

When winter comes around, however, the bubbles may have to come down. Heating them is not an option since it would destroy the plastic wrap.

Cafe du Soleil, which seats about 80 guests outdoors thanks to the wide sidewalks along Broadway, began using the space bubbles weeks ago when it wasn’t apparent that the government would approve of indoor dining.

As for how Cafe du Soleil will get through the winter, time will tell.

‘To survive the winter is very complicated,’ Rousselot says.

‘We’ll try to have [the space bubbles] as long as possible.’

Initially, Governor Andrew Cuomo said earlier this month that he wouldn’t allow restaurants to resume indoor dining despite the fact that the infection rate in New York City has been below 1 per cent for several weeks in a row.

Cuomo said he was concerned that allowing indoor dining would double the number of bars currently operating, thus posing an increased risk of renewed COVID-19 infections. 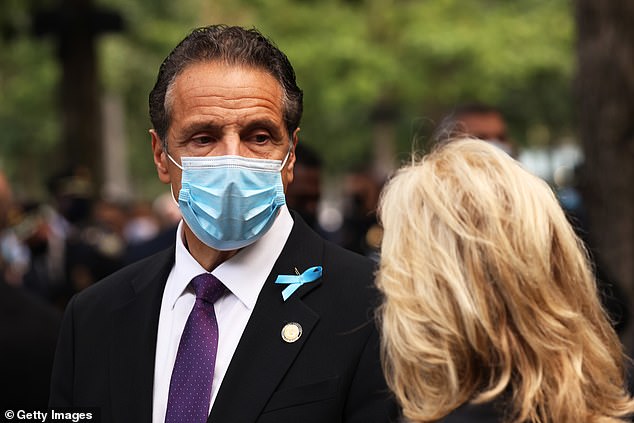 The governor’s comments outraged restaurateurs and bar-owners who sued the state for $2billion in damages, claiming they were being unfairly shackled and stopped from making money.

In response to the backlash, Cuomo reversed himself somewhat, announcing on September 9 that indoor dining would be allowed to resume with a 25 per cent occupancy limit and strict enforcement of COVID-19 safety protocols.

The governor said that if the data shows no renewed spike in COVID-19, he would expand indoor dining to 50 per cent capacity by November 1.

New York City – which has more bars and restaurants than any other city in the US – remains the only metropolis in the world that is yet to resume indoor dining.

It is also the only place in the state of New York that has not been allowed to welcome diners inside again.

As colder weather approaches, outdoor dining – which has only been an option for a small percentage of the city’s establishments – will end.

A group of restaurant owners said the 25 per cent capacity limit is ‘too little, too late.’ They plan to march to the governor’s office in Manhattan on Monday.