Kevin McCarthy pleaded with the media Thursday to give incoming members of Congress who have voiced their support for the conspiracy theory group QAnon ‘an opportunity’ to prove what they will do as lawmakers.

‘Look, our Party is very diverse,’ the House Minority Leader said when a reporter asked ‘how are you going to deal’ with QAnon supporters in the Republican caucus – specifically pointing to Representatives-elect Marjorie Taylor Greene and Laurent Boebert.

‘You mentioned two people who are going to join our Party and both of them have denounced QAnon,’ McCarthy insisted during his weekly press conference. ‘So the only thing I would ask of you in the press – these are new members – give them opportunity before you claim what you believe they have done and what they will do. I think it’s fair for all.’

Greene has come under fire for her anti-mask stances, but she was captured on video putting on an American-flag patterned face covering before checking in to House Freshman Orientation at a hotel Thursday.

The congresswoman-elect from Georgia was seen exiting her car with a mask hanging around her ear before putting it on and entering the hotel. 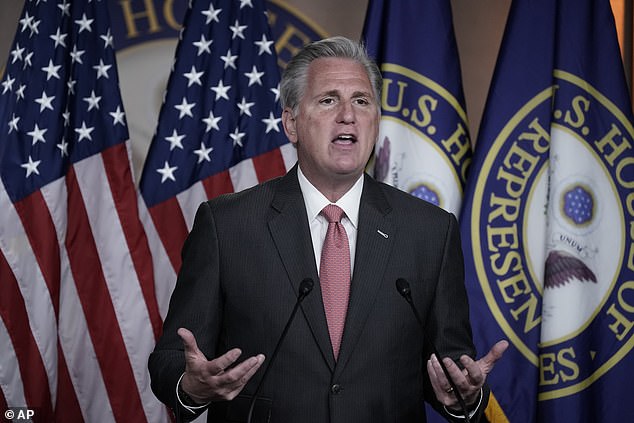 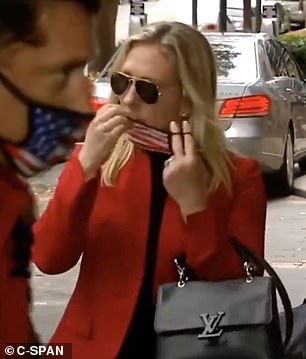 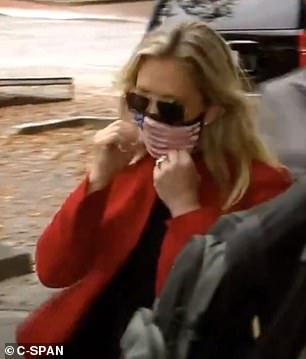 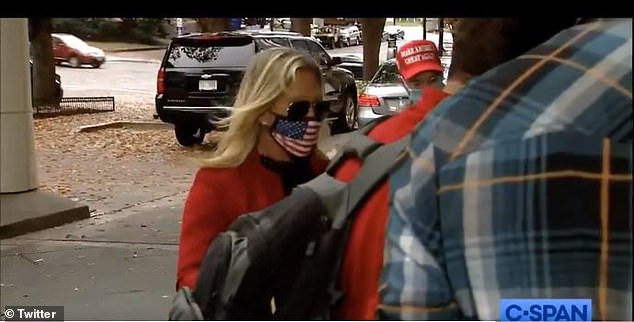 Greene has spewed pro QAnon notions before, but claimed calling her a ‘QAnon candidate’ is not an accurate representation of who she is 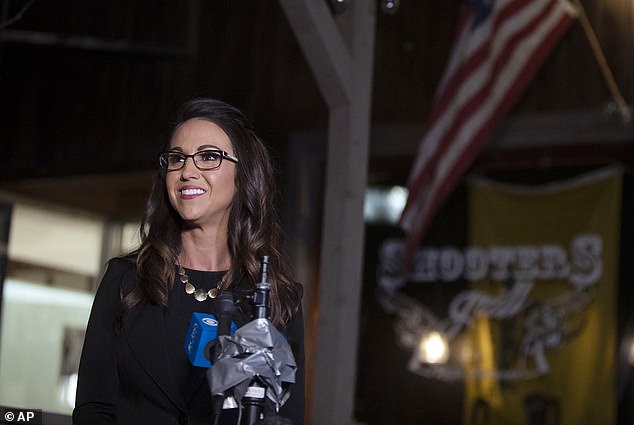 Lauren Boebert won her race in Colorado’s 3rd District. Although she has expressed some interest in QAnon, she has disavowed the conspiracy theories pushed by the group

In September, Greene went against Centers for Disease Control and Prevention guidelines by saying ‘children should not wear masks’ and to the shock of many claimed ‘forcing boys to wear masks is emasculating.’

Boebert, a gun-toting conservative who owns a pro-Second Amendment restaurant in Rifle, Colorado, won her race in the state’s 3rd District. Although she has expressed some interest in QAnon, she has disavowed the conspiracy theories pushed by the group.

Greene, who won her House race in Georgia’s 14th District this month, also said during the race that describing her as a ‘QAnon candidate’ is not a good representation of who she is overall.

‘But I don’t expect a lot of the left-leaning media to change their stance,’ Greene said of this label in an interview with Fox News after she won her Republican primary runoff – essentially securing her ascension to the House in a deep-red district.

‘I think they’re going to continue to attack me because they actually do see me as someone who’s unapologetically conservative. And I won’t back down on my beliefs and my values,’ she continued. 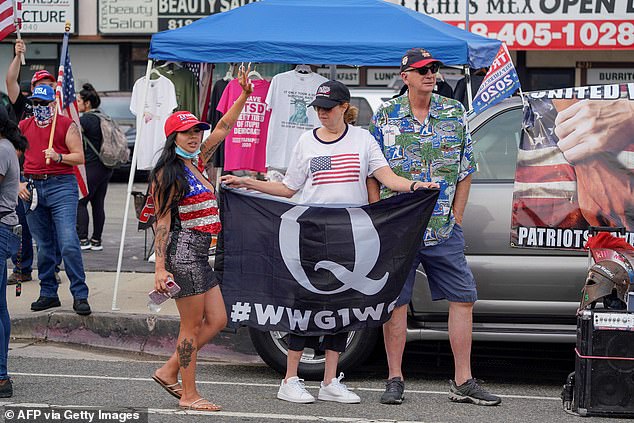 The QAnon conspiracy group believes that there is a ‘deep state’ controlled by a far-left Satan-worshiping pedophiles who also run a human trafficking ring. They believe that this group is doing everything it can from within the government to take down President Donald Trump.

Trump has not disavowed the conspiracy group, even when directly asked if he would do so during a live televised town hall with NBC News’ Savannah Guthrie last month.

Origins: Q Anon started on fringe website 4chan, where a poster calling themselves Q left messages claiming to be a senior federal official and purporting to reveal a ‘deep state’ cabal intent on bringing down Donald Trump. Q grew out of the discredited Pizzagate conspiracy that top Democrats were involved in pedophilia and cannibalism from the basement of a Washington D.C. restaurant, but quickly picked up steam with ‘Q’ leaving ‘clues’ and claims that Trump was going to bring down the deep state. Whenever the conspiracies turn out to not be true, followers rationalize that the inaccuracies are part of Q’s larger plan.

Who is Q?: There may now be multiple people posing as Q on the anonymous 4chan boards

A QAnon believer blocked the bridge near Hoover Dam with a homemade armored tank in the name of the movement, and later pleaded guilty to terrorism

Hoover Dam: In June 2019, 32-year-old Matthew Wright, a QAnon supporter, blocked the bridge near Hoover Dam in Arizona with a homemade armored vehicle in a 90-minute stand-off. He pleaded guilty to terrorism charges and has written two letters to Donald Trump from jail, which include the sign-off, which has become the QAnon motto: “For where we go one, we go all.”

Michael Flynn: Trump’s former national security adviser became a martyr figure for QAnon believers after he took a plea deal from Special Counsel Robert Mueller, admitting he lied about his Russia contacts. QAnon conspiracy have spun Flynn pleading guilty into him being a persecuted victim of the deep state – and some even claim he is ‘Q.’

Many believers put three star emojis next to their Twitter handles. But the retired three-star general has denounced any connections to the group and pulled out of participating in an event after finding out it was hosted by a QAnon believer.

QAnon Political Candidates: Jo Rae Perkins, 64, won the Republican primary in Oregon in May to run for a Senate seat against incumbent Democratic Senator Jeff Merkley. “I stand with Q and the team,” she said when asked about her interest in the group. She insisted she goes to QAnon message boards as a “source of information” and claims media focuses too much on the group. Perkins won 49 per cent of the vote against three other Republicans.

Marjorie Taylor Greene came in first place in the Republican primary in a deep-red Georgia district, and will enter an August runoff. She has admitted to believing in several QAnon conspiracy theories.