Democratic senators are already claiming they will not meet with Amy Coney Barrett as her nomination moves to the Senate floor next month, claiming her ‘extreme’ views are not suited for the Supreme Court.

‘I will not meet with Judge Amy Coney Barrett,’ Senator Kirsten Gillibrand asserted in a tweet Sunday afternoon. ‘This nomination process is illegitimate.’

The New York Democrat added: ‘I refuse to participate in the further degradation of our democracy and our judiciary.’

Democratic Senators Richard Blumenthal of Connecticut and Mazie Hirono of Hawaii joined in Gillibrand’s sentiment earlier in the day Sunday.

‘I will oppose the confirmation of Judge Amy Coney Barrett, as I would any nominee proposed as part of this illegitimate sham process, barely one month before an election as Americans are already casting their votes. Americans deserve a voice in this hugely consequential decision,’ Blumenthal posted in a lengthy string of tweets.

‘Judge Barrett’s views would harm real lives—real people—in real ways, from children with pre-existing conditions to women who just want to be able to decide when & how to have a family,’ he continued. ‘I’m fighting for them.’

The commitment from the lawmakers not to fulfill their duties as senators comes as Judiciary Committee Chairman Lindsey Graham announced Sunday that the panel will move the confirmation to the Senate floor October 22. 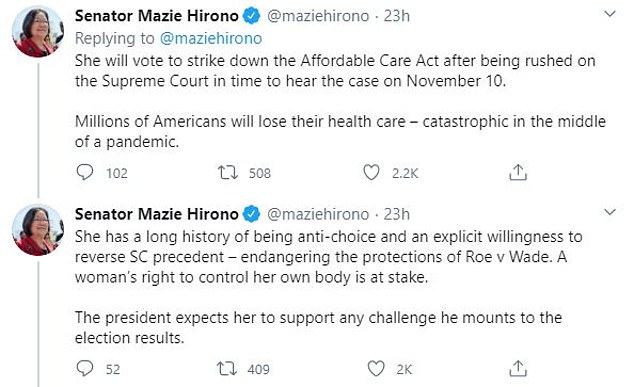 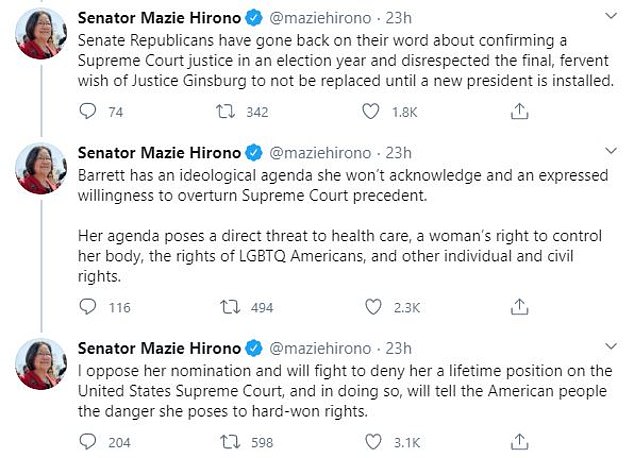 Hirono says she opposes the nomination because of Barrett’s stances on the Affordable Care Act and Roe v. Wade 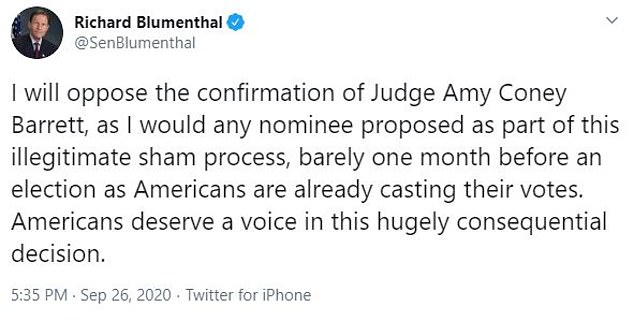 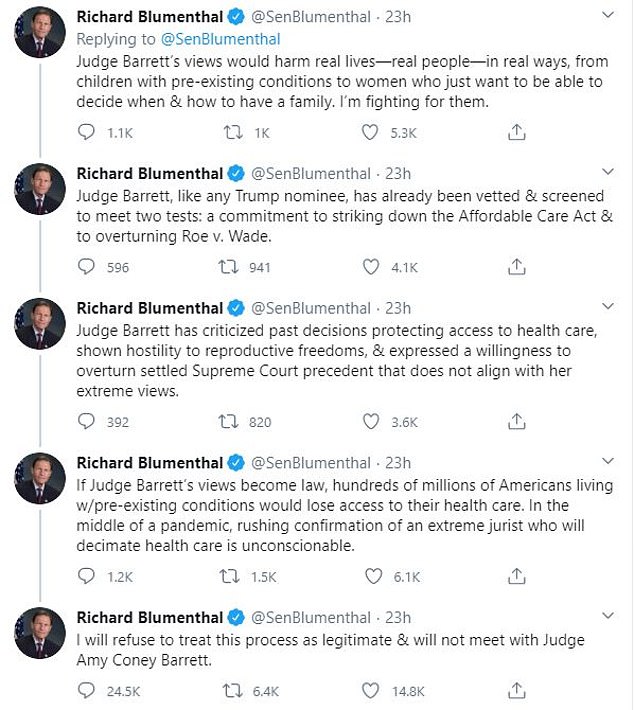 ‘So, we’ll start on October 12, and more than half of the Supreme Court justices who have had hearings were done within 16 days or less,’ Graham told ‘Sunday Morning Futures’ host Maria Bartiromo.

‘We’ll have a day of introduction. We’ll have two days of questioning, Tuesday and Wednesday, and on the 15th we’ll begin to markup, we’ll hold it over for a week, and we’ll report her nomination out of the committee on October 22,’ he continued.

‘Then it will be up to [Senate Majority Leader Mitch] McConnell as to what to do with the nomination once it comes out of committee,’ the South Carolina Republican said.

Blumenthal and Hirono agreed that Barrett was chosen by President Trump because of her ‘commitment to striking down the Affordable Care Act’ and ‘overturning Roe v. Wade.’

‘I will not support the nomination of Amy Coney Barrett to the Supreme Court for the following reasons: She will vote to strike down the Affordable Care Act after being rushed on the Supreme Court in time to hear the case on November 10. Millions of Americans will lose their health care – catastrophic in the middle of a pandemic,’ Hirono tweeted.

She shared her second reason as part of her Twitter thread Sunday: ‘She has a long history of being anti-choice and an explicit willingness to reverse SC precedent – endangering the protections of Roe v Wade. A woman’s right to control her own body is at stake.’

Trump announced Saturday that he is nominating Amy Coney Barrett, a 48-year-old devout Roman Catholic and mother of seven, to the vacant Supreme Court seat.

The seat opened last Friday after the most liberal justice, Ruth Bader Gisburg, died due to complications from pancreatic cancer.

‘The president expects her to support any challenge he mounts to the election results,’ Hirono continued of Barrett, referencing the president’s opposition to mass mail-in voting measures.

There is speculation swirling that Trump wants to push through Barrett’s nomination before Election Day so she is seated on the court to help with the inevitable fight over the election outcome in the light of mass remote voting.

Some also claim he wants her to be confirmed before oral arguments on Obamacare begin in the Supreme Court mid-November.

With a Republican majority in the Senate, and Graham’s newly announced timeline, Barrett will likely be approved to take the vacant Supreme Court seat before the end of October – and just days before the November 3 presidential election. 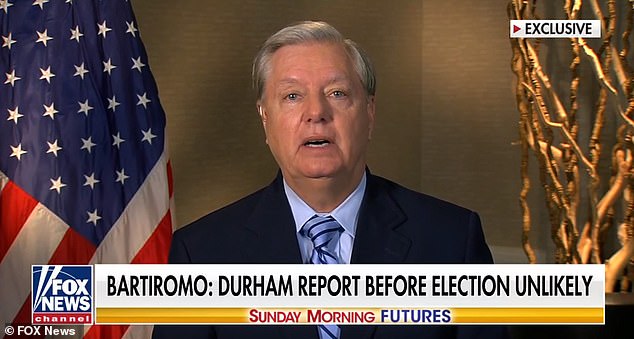 Trump formally announced Barrett as his nominee during an event in the Rose Garden Saturday afternoon.

Democrats lament that there should be no confirmation hearings or vote on a nominee until after the election, claiming whoever is victorious in November should choose the next Supreme Court Justice.

The seat opened up last Friday when Justice Ruth Bader Ginsburg died due to complications from pancreatic cancer.

The president touts Barrett as a pure constitutional textualist. And the federal judge said during her brief acceptance remarks Saturday that she will ‘apply the law as written.’