The stars of romcom Happiest Season went  over-the-top with their facial coverings during the movie’s premiere at LA‘s The Grove on Tuesday.

Stars including Kristen Stewart, Alison Brie and Aubrey Plaza wore their protective face masks – despite being outside and largely socially-distanced on-stage at the drive-through event.

Led by the Twilight actress, 30, the stars spoke outside at the premiere, during which they were widely spread out on a large, outdoor stage meaning the coverings were not entirely essential yet they remained in place.

Prior to taking the stage Kristen, Alison and Aubrey joined director and star Clea DuVall and Mary Holland on the red carpet where they posed closer together 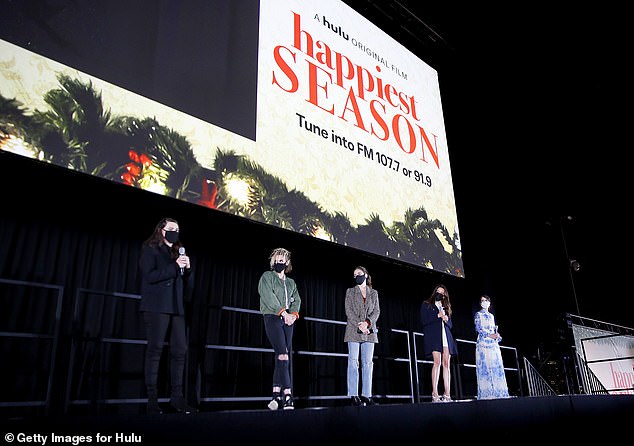 Guests at the event took to Twitter to reveal they had not been allowed to step out of their cars for safety’s sake.

Actress Sarayu Blue, who plays Carolyn, wrote to a fellow guest: ‘Wish I’d been able to give you a hug but glad we were all staying safe and sound in our cars’.

The eagerly-anticipated movie is set for US release on 26 November and follows Abby, played by Kristen, who plans to propose to her girlfriend Harper, played by Mackenzie Davis, while attending her family’s annual holiday party.

When they arrive at Harper’s family home, Abby soon realises Harper hasn’t come out to her conservative parents yet and has to pretend to be her ‘orphan friend’. 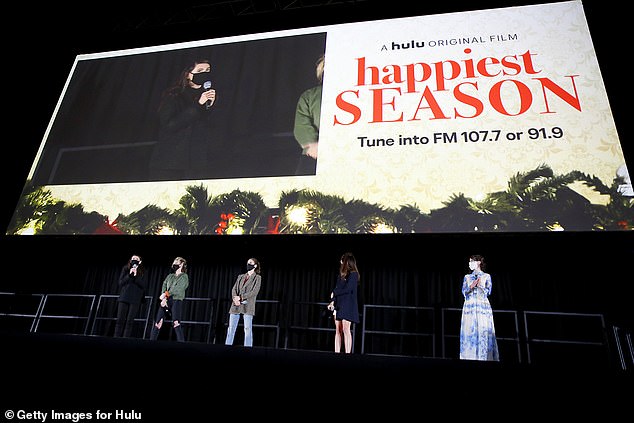 Far away: Giving a nod to the COVID-19 pandemic, stars including Kristen Stewart, Alison Brie and Aubrey Plaza bizarrely wore their protective face masks despite being largely socially distanced on stage at the drive-through event 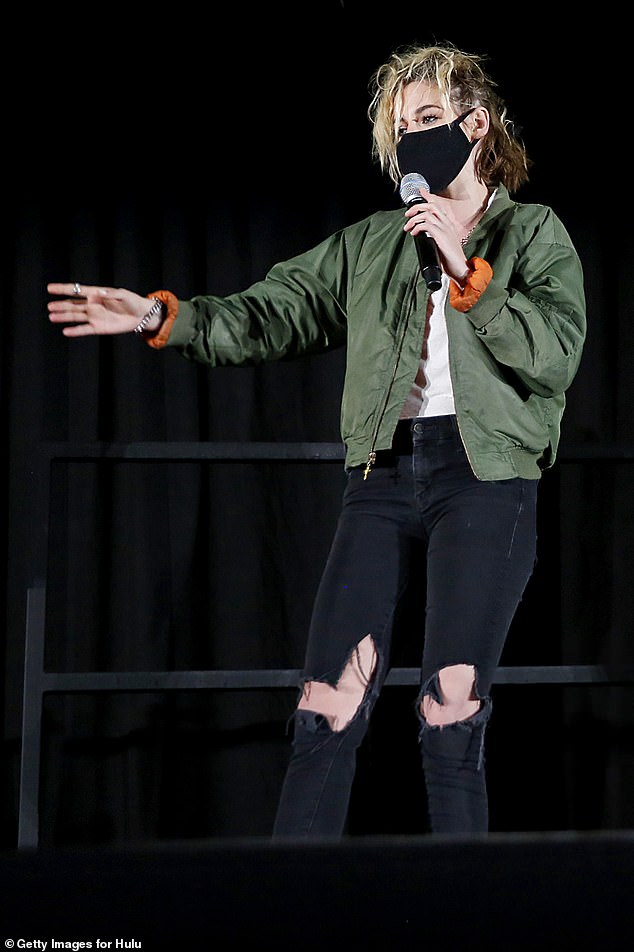 Taking the stage: During the later Q&A, Kristen transformed from her red carpet look into a casual ensemble but kept her mask in place

Stunner: Alison, 37, went for a more relaxed style as she donned ripped jeans and a chic oevrsized blazer while neatly pulling her hair back 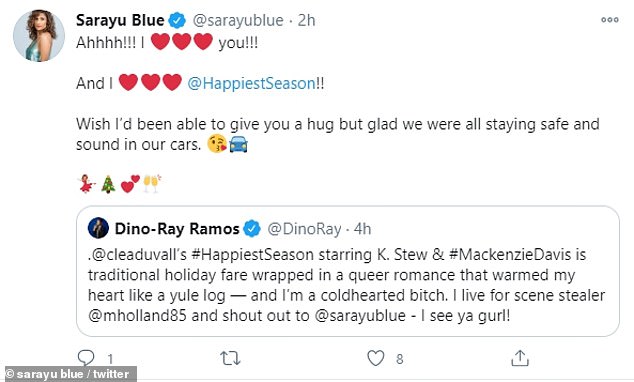 Staying safe: Guests at the event took to Twitter to reveal they had not been allowed to step out of their cars for safety’s sake

As the ladies graced the red carpet, Kristen was at the helm in a short mini which featured bell sleeves.

She styled her spunky, bleached hair into a gelled style while opting for a smouldering smokey eye.

During the later Q&A, Kristen transformed into a wholly more pared-back look as she donned a stylish khaki bomber and ripped jeans. 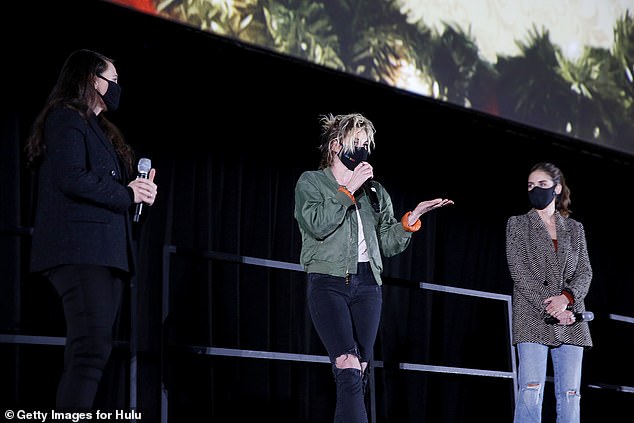 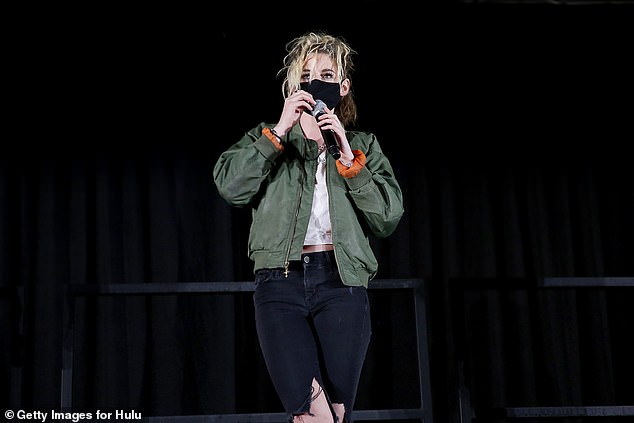 Chatting away: Kristen allowed her spunky bleached locks to fall over her face and mask 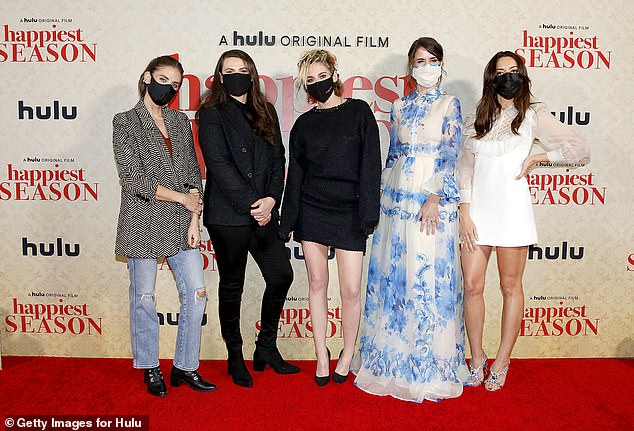 Aubrey was also opting for a leggy display in a white mini dress, which flaunted her endless pins, and a pair of dazzling strappy sandals.

Alison, 37, went for a more relaxed style as she donned ripped jeans and a chic oevrsized blazer while neatly pulling her hair off her pretty face.

Clea, who wrote, directed and stars as Georgia in the movie, donned a stylish all-black ensemble with tight trousers and a blazer. 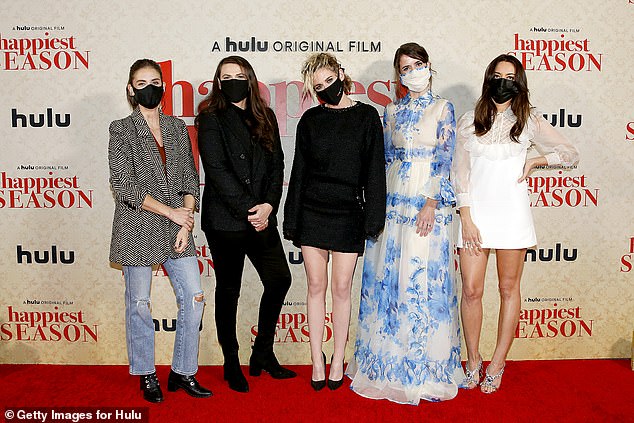 Glam: The red carpet has been a distant memory throughout the COVID-19 pandemic

Kristen recently spoke to Clea about life in lockdown, as she said she felt ‘better’ while quarantining at home amid the coronavirus pandemic if she got dressed up to go out and particularly enjoyed wearing ‘matching’ garments.

She said: ‘Usually, I’m a really uniform-based person. For certain weeks, I was getting dressed every morning as if I had somewhere to go. It made me feel better.

‘There was a period of time when I only wanted to wear s*** that was matching. I have a leopard-print suit thing that is really fun to wear around the house. So, we wore suits and sets. And then these silky, robe-y things.

‘My dad used to wear a robe around the house, and it was very floofy. I am small, so if I wear a puffy robe, it just looks so lame. The reason I didn’t like robes is that I felt silly and dinky, and I don’t like feeling silly and dinky… 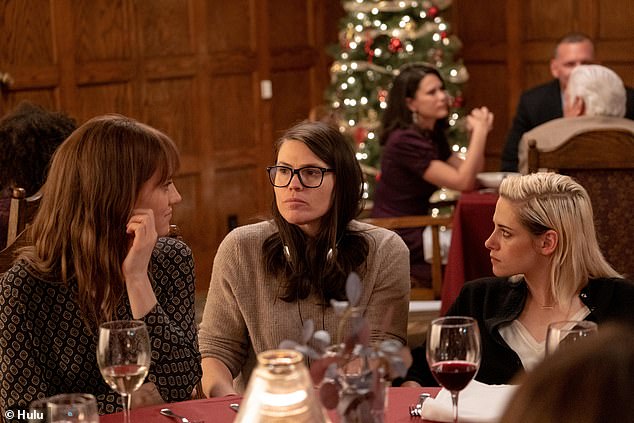 At work: Director Clea DuVall with Kristen and her co-star Mackenzie Davis in Happiest Season

‘Basically, I’ve been stepping outside of wearing jeans and T-shirts. Within the confines of my own home, of course.’

The actress is one of the faces of Chanel and though she’s got a lot of clothes from the fashion house, she admitted she isn’t “daring” enough to wear a lot of them.

Kristen went on: ‘I have all my Chanel s*** together. Sometimes I just walk by it. My little black jacket is sitting there. I have a couple of bags that are really classic…

‘But then I have so many things that a more daring, cooler person would wear. Maybe if I have kids, they’ll be like, ‘Why aren’t you wearing this incredible thing?’ Maybe someone will step in and utilise my wardrobe.’ 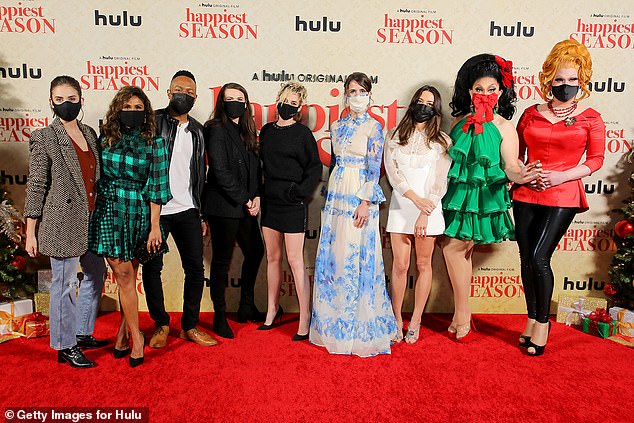