Lara Trump, 38, has been telling those close to her, according to a Thursday report, that she is considering making a run for the U.S. Senate in 2022 to represent her home state of North Carolina.

President Donald Trump‘s daughter-in-law, married to his second eldest son Eric Trump, 36, told three of her associates that she is thinking of making a bid for public office, The New York Times reported.

This would make Lara the first of Trump’s family members to attempt to ride to public office on the coattails of his presidency.

‘She would be formidable,’ former White House Counselor Kellyanne Conway, who also served as Trump’s 2016 campaign manager, told the Times of a potential Senator Lara Trump.

‘She has the trifecta: She can raise money, raise awareness of key issues and raise attention to her race. Unlike many typical politicians, she connects with people and is a compelling messenger,’ Conway said.

Lara Trump is considering a run for Senate in her home state of North Carolina in 2022, according to three of her associates 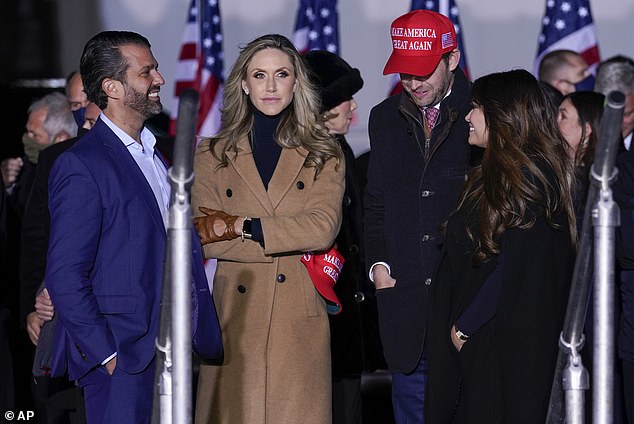 If true, Lara would be the first of the president’s relatives to try and ride his coattails to public office despite speculation that Don Jr. (left) would be the one to do so. Pictured on right are Eric Trump and Don Jr.’s girlfriend Kimberly Guilfoyle 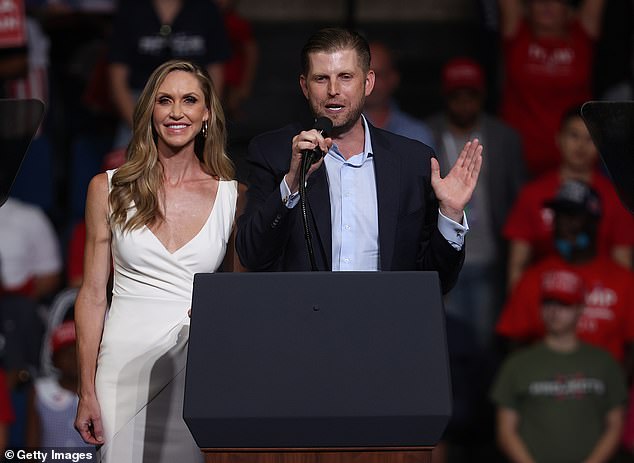 A Trump Organization spokesperson for Lara did not immediately respond to a DailyMail.com inquiry on whether she is considering a run for public office.

The seat in North Carolina is opening as Republican Senator Richard Burr, who chairs the Intelligence Committee that investigated Trump’s ties to Russia, announced he will retire at the end of his term.

The race could be hotly contested as the Tar Heel state turns more purple and several other big-name Republicans are considering a run to take Burr’s seat.

Mark Walker, a Trump ally who represents North Carolina’s 6th District, has said he is considering a run – and the president has suggested he’d support him by encouraging the bid.

White House chief of staff Mark Meadows is also likely to throw his hat in the ring after he left his post in the House representing North Carolina’s 11th District to serve on Trump’s administration.

‘In North Carolina, in particular, she’s a household name and people know her. She worked really hard on the campaign and was very involved in a lot of decisions throughout,’ Schlapp, who traveled the country as a Trump surrogate alongside Lara, said.

During the 2020 campaign, Lara hit the campaign trail harder than in 2016 and emerged as a frequent defender of the president. 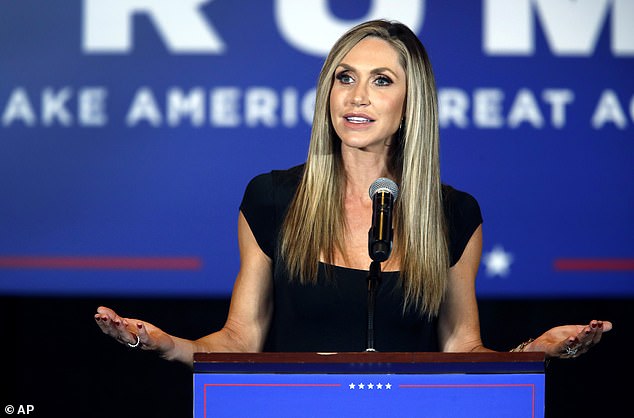 On the 2020 campaign trail, Lara became a staunch defender of Trump

The 2022 Senate race in North Carolina is expected to be pretty competitive in the swing state that went red in both the 2016 and 2020 presidential election. The margins there have been narrowing over the years as North Carolina has emerged as a battleground state.

The small margin of victory this year for Trump, which included an increased turnout in rural areas where he is immensely popular, shows that the state is trending more blue lately and indicates the first post-Trump election could be tightly contested.

Perhaps less of a contest if Lara entered the scene.

Lara is a former personal trainer and television producer for Inside Edition, she wed Eric Trump at the family’s Mar-a-Lago estate in 2014 and has since taken a role with her father-in-law’s presidential campaign.

She and Eric have two children together.

Political experts and insiders have floated the possibility that Trump’s adult children could follow in their father’s footsteps and pursue political office. Most focus of that speculation has gone to his daughter Ivanka and eldest son Don Jr.