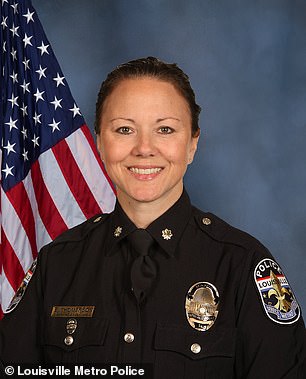 Louisville Metro Police Maj. Bridget Hallahan has been relieved of her command and will retire on October 1, officials said

The Kentucky police major who criticized Black Lives Matter activists and Antifa supporters in an email sent to her department has been relieved of her command and will retire in October.

Maj. Bridget Hallahan, who is white and commanded Louisville’s Fifth Division, allegedly blasted BLM protesters and Antifa as ‘punks’ who will always be ‘living in their parents’ basement,’ Walmart cashiers or ‘washing our cars’ in a message supposedly sent to colleagues in August.

She also allegedly claimed that police officers in the city and their families are also being ‘doxed.’

The email was published by the Courier Journal Wednesday just hours before protesters erupted in anger over the decision by a Kentucky grand jury not to indict any of the three officers involved in the fatal shooting of Breonna Taylor with her murder.

Following the content of the alleged email being made public, Louisville Metro Police Department interim Chief Robert Schroeder said that Hallahan was relieved of her duties leading the Fifth Division and that she will retire on October 1.

‘We are aware of these emails and we have been looking into them,’ Schroeder said, according to Fox News.

‘They were her personal opinions and do not represent the views of this department.’ 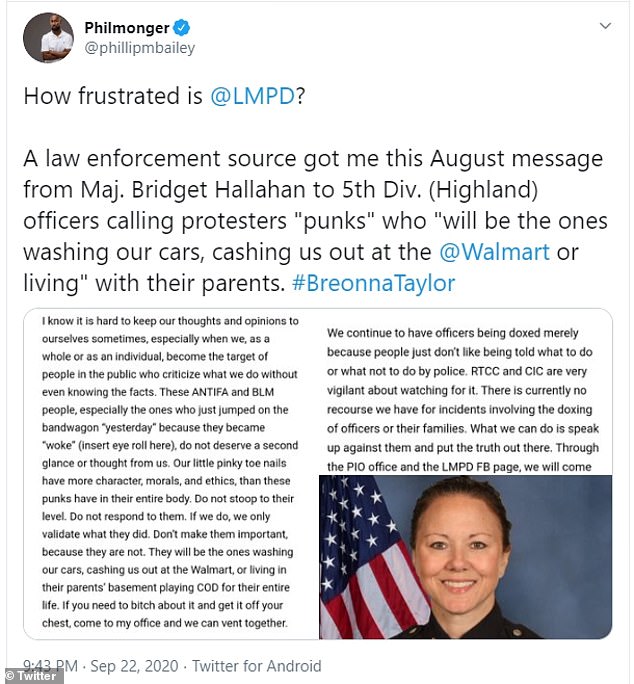 Hallanhan’s retirement comes just days after an email she allegedly wrote in August, criticizing BLM protesters and Antifa, was made public 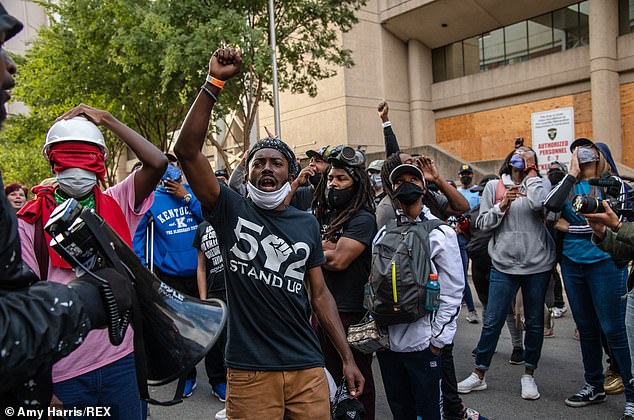 The email was published hours before a grand jury decided not to indict any of the officers involved in Breonna Taylor’s death for murder. Protesters are seen in Louisville Wednesday

In Hallahan’s alleged email, she invited cops in her division to come to her office to ‘vent together’ and called on them not to ‘validate’ the protesters or to ‘make them important’.

‘I know it is hard to keep our thoughts and opinions to ourselves sometimes, especially when we, as a whole or as an individual, become the target of people in the public who criticize what we do without even knowing the facts,’ Hallahan was said to have written in the August email. 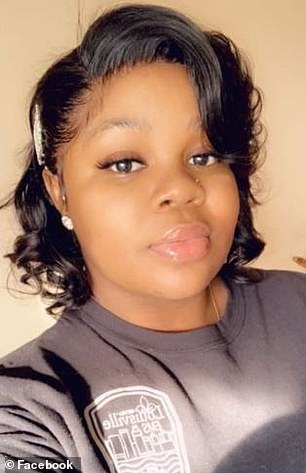 ‘These ANTIFA and BLM people, especially the ones who just jumped on the bandwagon ‘yesterday’ because they became ‘woke’ (insert eye roll here), do not deserve a second glance or thought from us. Our little pinky toenails have more character, morals, and ethics, than these punks have in their entire body,’ the email continued.

‘Do not stop to their level. Do not respond to them. If we do, we only validate what they did. Don’t make them important, because they are not. They will be the ones washing our cars, cashing us out at the Walmart, or living in their parents’ basement playing COD for their entire life.’

The message then made non-specific claims about the doxing of officers in the department.

Hallahan allegedly claimed it was happening ‘merely because people just don’t like being told what to do or what not to do by police’.

‘There is currently no recourse we have for incidents involving the doxing of officers or their families,’ the message reads.

‘What we can do is speak up against them and put the truth out there. Through the PIO office and the LMPD FB page, we will come back at them on their own page to let them and everyone else know they are lying. We will print the facts. I will see to it.

‘We have already taken care of one incident. I hope we never have to do it again. Just know I got your back,’ she was said to have added. 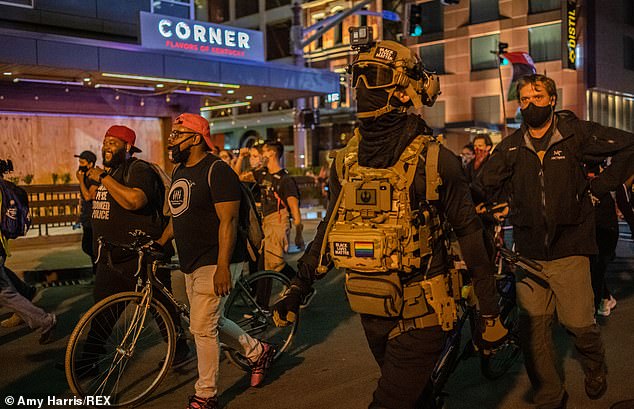 Taylor’s death has resulted in more than 100 days of protest in Louisville. BLM protesters are seen in the city’s streets Wednesday night after the grand jury’s decision 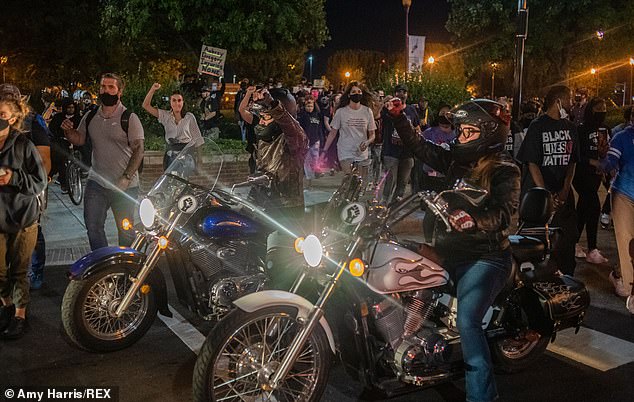 Protesters in Louisville are seen riding motorcycles on Wednesday night. Two police officers were shot shortly before the countywide curfew went into effect that night 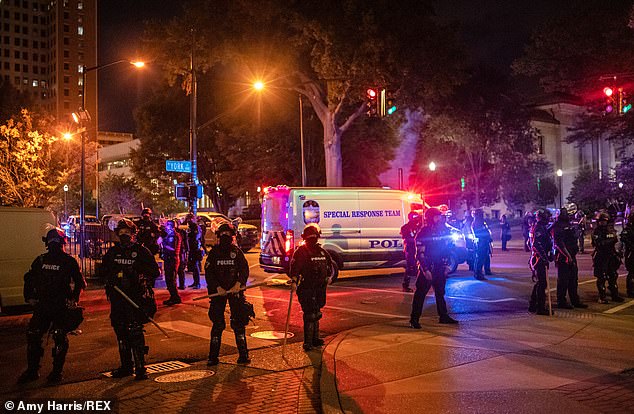 Hallahan had commanded the division since last July and before that, oversaw the department’s training division.

City officials called the message ‘out of character’ for her but said it was ‘totally unacceptable’.

‘I’m disappointed,’ said Metro Councilman Brandon Coan. ‘I think it’s a totally unacceptable attitude of any police officer and extremely poor leadership from a major. I think she owes the community an apology and she’ll have to deal with the consequences of her conduct.’

‘It’s making constituents wonder what kind of people we’re really employing and promoting to leadership positions. And that’s very unfortunate. Our police officers have a very difficult job and they don’t need this kind of inappropriate communication.’

Hallahan’s alleged message emerged in the wake of the Courier Journal also revealing a supposed message sent by one of the officers involved in Taylor’s fatal shooting, in which he defended his and his colleagues’ actions.

Sgt. Jonathan Mattingly, who was wounded during the March shooting that claimed Taylor’s life, allegedly emailed coworkers to accuse city officials of failing officers ‘in epic proportions for their own gain and to cover their asses’.

Taylor, 26, was killed when Mattingly, Detective Myles Cosgrove and Officer Brett Hankison burst down the door to her Louisville home while executing a botched late-night raid and shot her six times.

The black EMT died after 32 rounds were fired into her home and neighboring addresses while the police were executing a search warrant for her home related to a drugs investigation over her ex-boyfriend, who had been arrested at a different address earlier that night.

Taylor’s death sparked more than 100 days of protests in Louisville and around the country, which erupted with renewed vigor on Wednesday night following the grand jury’s decision not to indict the involved officers on murder charges.

Hankison, however, was indicted on first-degree wanton endangerment charges related to shooting into the neighboring apartments during the incident. The Class D felony which carries a penalty of up to five years in prison.

During the Wednesday night protests in Louisville, 13 people were arrested on charges including property destruction, resisting arrest, failure to disperse and assault on a police officer.

The officers were responding to reports of gunfire near one of the protest marches and received non-life-threatening injuries.

Schroeder told reporters that a suspect was in custody and that one of the officers had needed surgery, CNN reported.