‘Do you regret doing Panorama?’ I asked Princess Diana over lunch at Kensington Palace in May 1996, six months after her infamous BBC interview that is now making global headlines again.

She looked at me intently with her massive blue eyes.

‘No,’ she replied firmly, ‘I have no regrets. I wanted to do it, to put my side over. There has been so much rubbish said and written that it was time people knew the truth. But I won’t do it again. Once is enough. I have done what I set out to do.’

I looked over at her son Prince William, just 13 at the time and the only other lunch guest apart from a palace PR lady, and he was staring unhappily down at his plate.

‘Did you think it was a good idea, William?’ I asked him.

He pursed his lips, and his cheeks reddened, then he laughed in a slightly embarrassed way and replied: ‘I’d rather not say…’ 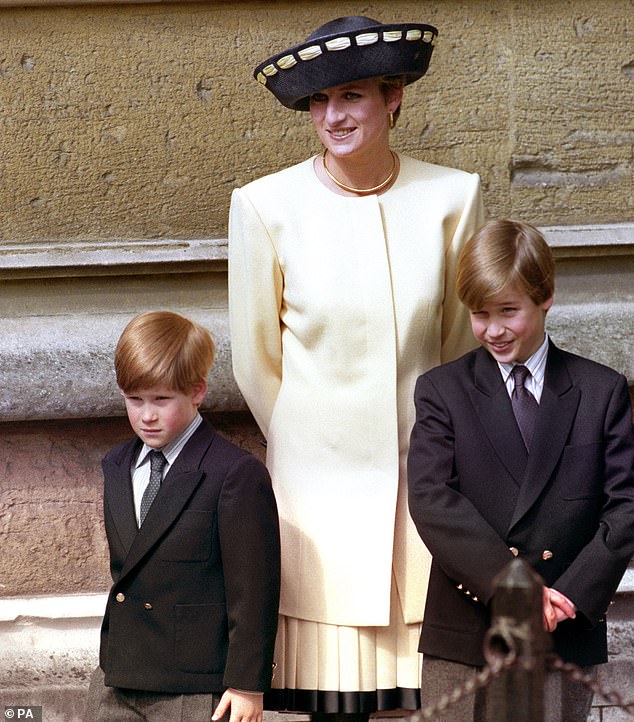 If he disapproved of his mother’s decision to spill her guts out about her private life on national TV, he certainly wasn’t going to tell me, then editor of the tabloid Daily Mirror.

But his tense body language told me all I needed to know. (Diana’s friend Simone Simmons told Vanity Fair this month that William was furious his mother had done the interview and they had a blazing row about it when it was broadcast, having had to endure the toe-curling experience of watching it at Eton.)

By that point, Diana had had plenty of time to consider the spectacular fall-out from her on-air confessional watched by 22 million gob-smacked Brits.

It compelled the Queen to dramatically step in and order her and Prince Charles to divorce, cutting the Princess loose from her troubled marriage but also from the protective shield that safeguards senior members of the Royal Family.

Just 15 months after our lunch, and less than two years after Panorama aired, Diana was killed in a car crash in a Paris underpass. The driver of her car, a French hotel security guard named Henri Paul, was speeding recklessly and three times over the legal alcohol limit. And neither Diana nor her boyfriend Dodi Fayed, who also died, were wearing seatbelts.

I’ve always believed that if she’d still had the highly trained, incredibly professional royal protection squad taking care of her that night, Diana would be alive today.

But she gave up her permanent police protection as part of the divorce, and the rest is tragic history.

That’s why the current re-energised furore over her Panorama interview is so important. 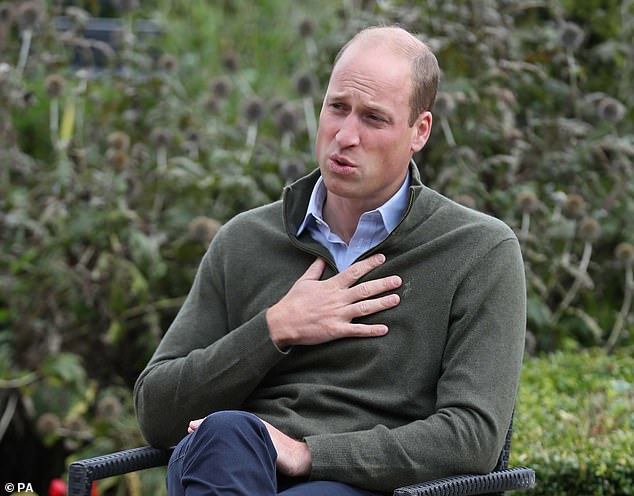 Prince William (pictured in Belfast in September) has now made a rare intervention to say: ‘The independent investigation is a step in the right direction’

For it’s not a stretch to conclude that it directly precipitated a chain of events that ultimately cost the Princess her life.

Diana’s insistence to me that she didn’t regret telling the world about her marital turmoil and her adulterous behaviour with James Hewitt seemed genuine.

But she was a very stubborn woman when she wanted to be, particularly when it came to acknowledging her own failings – and it may be that she simply refused to admit even to herself the unpalatable reality that it had been a terrible mistake.

Or as now seems increasingly more likely, Diana was persuaded that she was right to do it by a BBC journalist intent on landing the massive scoop at any cost including alleged lying, cheating and fraud.

That journalist was Martin Bashir, and the interview propelled him into the stratosphere as a global media superstar.

He used it to land further huge exclusives with the likes of Michael Jackson, and to make himself a very lucrative household name on American TV.

Bashir became the ‘Diana guy’ – the man who finally got the sit-down the whole world wanted to see with the biggest star on the planet.

But now shocking claims have emerged about exactly how he got Diana to talk, and it’s a growing scandal that shames Bashir and the BBC too for allegedly carrying out a shameful cover-up over his possibly criminal conduct.

Leading the charge is Diana’s brother Earl Spencer, who kept detailed notes at the time and says Bashir peddled 32 disgusting lies and smears as part of the interview wooing process, designed to exploit Diana’s well-documented paranoia and get her to speak. 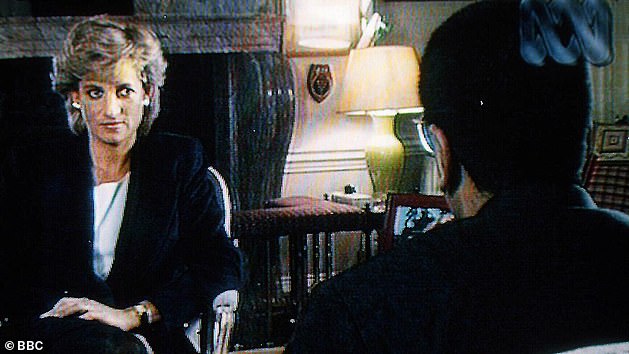 Diana was interviewed on Panorama by Martin Bashir for the BBC on November 20, 1995

Bashir, according to Earl Spencer, said her bodyguard was plotting against her, MI5 was following her, her friends were betraying her, and MI6 had taped Charles and his private secretary planning the ‘end game’.

He is said to have falsely claimed Charles and nanny Tiggy Legge-Bourke went on a secret holiday together, that the heir to the throne was ‘in love’ with her, and even that Tiggy was pregnant with Charles’s child.

Bashir allegedly lied that Prince Edward was having treatment for AIDS – then a far more lethal and stigmatised disease than it is now – and the Queen was a ‘comfort eater’ with ‘heart problems’.

And he is accused of showing Earl Spencer fake bank statements he ordered a blameless BBC graphics artist to forge, purporting to show the Earl’s security head was in the pay of a newspaper group.

If this is all true, and Bashir – who, incredibly, is now religion editor at the BBC – hasn’t denied any of it, then it’s an absolute disgrace.

Ironically, the great interrogator is currently refusing to answer any questions or do any interviews himself after being signed off sick from work. According to the BBC, he is recovering from quadruple heart bypass surgery and ‘significant complications from having contracted Covid-19 earlier in the year.’

Hmmm, call me cynical but given that Bashir’s now been photographed several times out and about looking perfectly OK, in one instance carrying a bag of wine with a takeaway Indian meal, it’s hard not to suspect he’s deliberately avoiding any scrutiny of his actions.

Well, he won’t be able to avoid it for much longer because new BBC Director-General Tim Davie has ordered a new independent investigation into the scandal, led by Lord Dyson, a former Supreme Court judge and Master of the Rolls. 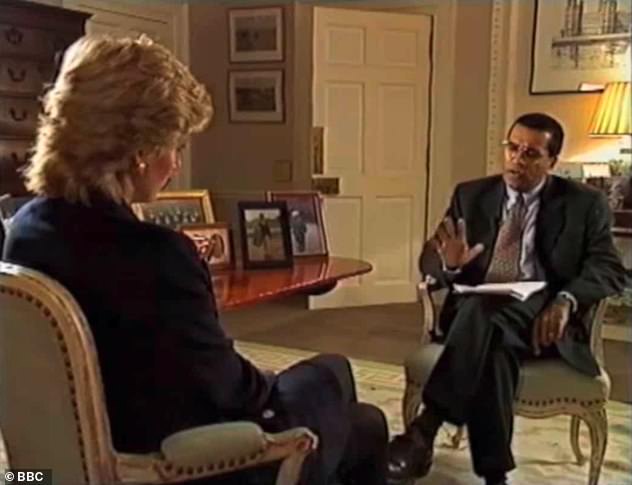 And Prince William has now made a rare intervention to say: ”The independent investigation is a step in the right direction. It should help establish the truth behind the actions that led to the Panorama interview and subsequent decisions taken by those in the BBC at the time.’

Lord Dyson’s terms of reference focus on exactly what steps the BBC and Bashir took to obtain the Diana interview, especially with relation to any ‘mocked-up bank statements’, who knew what at the BBC about the methods used, and ‘how effectively did the BBC investigate the circumstances leading to the interview?’

Former long-time highly-respected Panorama journalists like Tom Mangold are now saying – he wrote an excoriating denunciation in The Times yesterday of how BBC bosses covered up Bashir’s shocking skulduggery – that there was a deliberate and concerted conspiracy to conceal the truth and protect the ‘integrity’ of both the interview and the interviewer.

The BBC’s original internal investigation in 1996 cleared Bashir of any wrongdoing and described him as an ‘honest man.’

Crucial to his exoneration was a handwritten letter Diana sent to the corporation apparently saying Bashir’s underhand behaviour hadn’t influenced her decision to do the interview. The letter was lost but rediscovered last week.

To my mind, the letter is irrelevant to Bashir’s culpability or the BBC’s complicity.

I know Diana didn’t regret doing the interview because she told me so herself.

So, it’s not surprising that she would defend the guy who did it. He probably begged her to.

But that doesn’t mean the diabolical tactics Bashir deployed to persuade her to succumb to his advances were not an outrageous abuse of his position as a BBC journalist whose salary was being paid with taxpayer money. 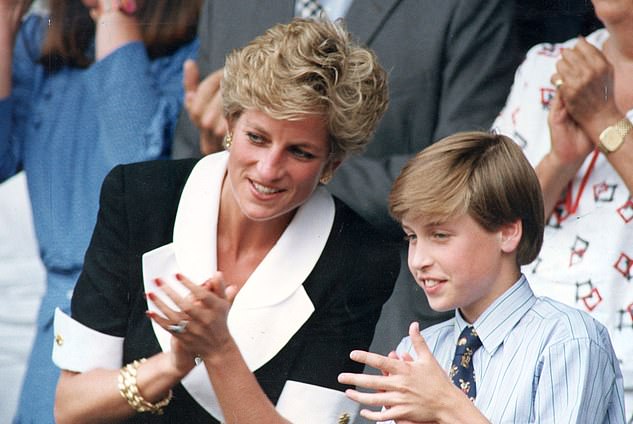 There’s also a supreme irony about all of this that won’t be lost on any tabloid editor or journalists.

I myself published many big royal scoops over the years and on every single occasion the BBC would spew a stupendously pompous tone of faux moral outrage at my decision to publish such ‘intrusive’ revelations, whilst gorging on every juicy entrail of the actual stories.

I can only begin to imagine the scale of indignant horror the BBC would have expressed had it been me who faked bank statements and told repeated appalling lies of the kind Bashir told to persuade Diana to do an interview.

They would have – rightly! – screamed blue murder, and demanded I be fired and prosecuted for committing an act of fraud.

Now the BBC stands accused of behaving in a way that makes me look like a choirboy by comparison.

And the consequences of its actions couldn’t be more profound or disturbing.

I vividly remember BBC journalists eagerly pinning the blame for Diana’s death on the terrible tabloids for fuelling the paparazzi culture that led to her death in Paris as they chased her car.

But it now appears it was the BBC’s own wicked lies and deception that persuaded Diana to do the interview that cut her off from the royal protection officers who would have prevented her from dying.

And then the Corporation covered up its lies and deceit to save its own reputational skin.

The hypocrisy stinks almost as much as the cruel deception.

The BBC has Diana’s blood on its hands, and heads must roll.