A Portland City Commissioner who called cops on her Lyft driver earlier this month has issued a statement defending her actions by claiming she found herself in a potentially ‘deadly’ situation.

Jo Ann Hardesty, a vocal proponent of sweeping police budget cuts, claims that it was ‘terrifying’ to be left at a shut gas station at night after a row with the driver.

However, records show the station was open at the time with lights on and staff in attendance.

Hardesty faced a backlash for calling 911 on November 1 after her Lyft driver cancelled her ride and dropped her off at a Chevron gas station, saying she could find another car, following an argument about open windows.

Hardesty refused to leave the vehicle, saying she was not going to let the driver abandon her on the side of the road near a shuttered gas station.

In an open letter addressed to ‘Portland,’ which Hardesty released on Twitter on Wednesday, she continued to insist that the gas station was closed, and that as a black woman, she was afraid for her safety. 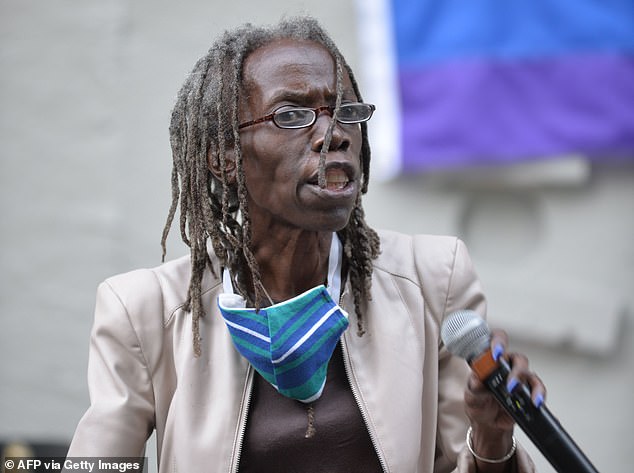 Jo Ann Hardesty, the Portland City Commissioner who called 911 on her Lyft driver earlier this month, released a statement on Wednesday defending her actions and blaming them on fear 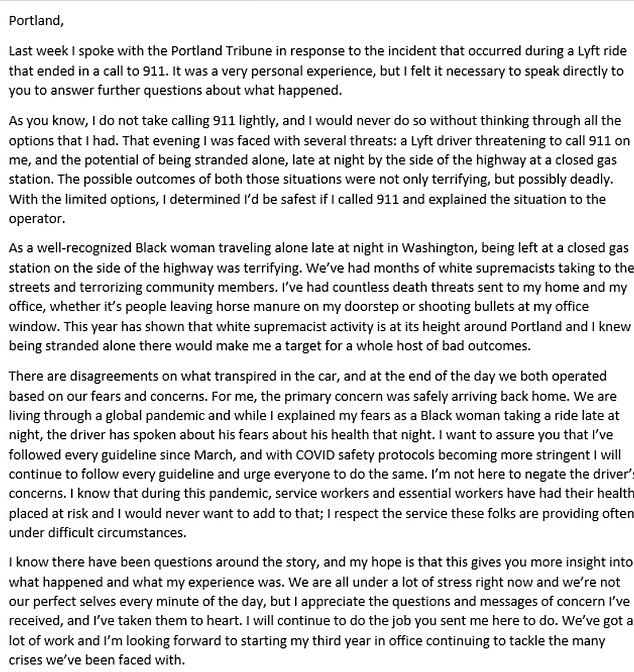 ‘That evening I was faced with several threats: a Lyft driver threatening to call 911 on me, and the potential of being stranded alone, late at night by the side of the highway at a closed gas station,’ she wrote. ‘The possible outcomes of both those situations were not only terrifying, but possibly deadly.’

According to emergency dispatch records, Hardesty called 911 at 9.48pm and two Ridgefield police officers responded to the scene at 9.57pm.

A clerk who works at the Chevron station told Oregon Live the convenience store closes at 10pm but the station’s night lights remain on because the pumps are available for use 24 hours a day.

Hardesty’s Lyft driver, Richmond Frost, claimed that he took the city commissioner to the well-lit gas station and denied leaving her stranded on the site of the road.

In her latest statement addressing the controversy, Hardesty doubled down on her earlier claims.

‘As a well-recognized Black woman traveling alone late at night in Washington, being left at a closed gas station on the side of the highway was terrifying,’ she argued. ‘We’ve had months of white supremacists taking to the streets and terrorizing community members.

‘I’ve had countless death threats sent to my home and my office, whether it’s people leaving horse manure on my doorstep or shooting bullets at my office window.’

Hardesty conceded that both she and the ride-share driver ‘operated based on our fears and concerns,’ which for her was getting home safely, and for Frost was not puttiing his health at risk, according to the statement.

As it was previously reported, Hardesty was allegedly angered after Frost, 63, refused to close the car windows at her request after picking her up from a casino, despite it being recommended policy from the company to keep them open due to the coronavirus.

‘I want to assure you I’ve followed every [coronavirus] guideline since March,’ Hardesty wrote. ‘I’m not here to negate the driver’s concerns. I know that during this pandemic, service workers and essential workers have had their health placed at risk and I would never want to add to that.’

Hardesty concluded by blaming the situation on ‘stress,’ writing that ‘we’re not our perfect selves every minute of the day.’

Hardesty, who is the head of Portland’s emergency dispatch bureau, previously stated that most 911 calls are unnecessary, and was one of the city’s main advocates of a $18million cut to the Portland Police Department.

On November 1, Hardesty had been picked up from ilani Casino in Washington, when the series of disagreements began.

After arguing with Frost over the pickup location and his refusal to close the window, the driver canceled the ride and pulled over at the Chevron gas station, telling Hardesty to get another car.

After Hardesty refused to exit the vehicle, both she and the driver called 911 on one another.

Audio of both the 911 calls were published by Oregon Live, revealing their versions of events. 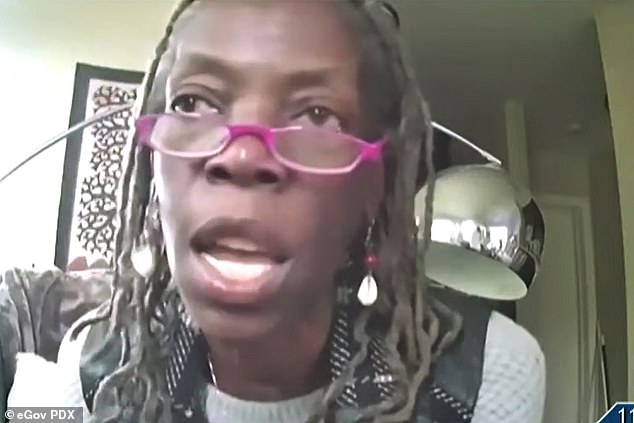 Speaking during a city council meeting, Hardesty claimed that she called the cops on the Lyft driver who canceled her ride because she feared the ‘city where white supremacists are proudly riding around in their big trucks with their flags’

‘Well, I’ve got a Lyft driver that decided he would just drop me off at a filling station. Well, I’m not getting out of the car, in the dark, at a filling station, not happening. All because I asked him to put the window up. I’m not leaving,’ Hardesty told the 911 operator.

‘I am not going to allow him to leave me on the side of the road. I paid for a ride and he says he canceled it, so I’m just going to sit here until he sends me another ride.’

She is told by the dispatcher that ‘technically it’s his property and there’s no crimes involved’.

‘Only you can order another ride,’ the dispatcher said, according to KOIN 6. ‘I can have an officer come out but they’re not going to be able to make him stay there.’

‘He can’t go anywhere because I’m not moving until another car comes,’ Hardesty insists and the dispatcher says they will send an officer.

In Frost’s call, made three minutes after Hardesty, he is heard saying: ‘I’ve got a customer that I canceled the ride. I’m a rideshare driver and I canceled the ride, and I’ve taken her off the freeway to this filling station so that she can order another ride.

‘I canceled the ride so she’s no longer involved or engaged with me. She’s refusing to get out of my car,’ he added, explaining that she was in the back seat and he was in the front.

When asked if she could have any weapons on her, he replied: ‘I doubt it’.

Hardesty said that she made the call because she felt unsafe in the situation.

‘As you know, i do not take calling 911 lightly,’ she wrote on Wednesday,’and I would never do so without thinking through all the options that I had.’

Hardesty had a new ride by 10.14pm but immediately made a complaint to Lyft, accusing the driver of potentially putting her at risk.

Lyft responded by stating that the driver had acted in accordance to their policy.

‘The feedback alleged that you refused to exit the driver’s vehicle after they requested you do so. As a reminder, drivers are free to end a ride for any reason as long as the drop off is in a safe location,’ it said.