A powerful 5.5 magnitude earthquake hit Nevada in the early hours of Friday morning, close to Carson City and the California border.

The earthquake struck at 1:13 a.m. on Friday, according to the U.S. Geological Survey 111 miles from Carson City, Nevada and 100 miles from a city.

It was close, however, to Nellis Air Force base to the south-east, and Hawthorne Army Depot to the North-West. 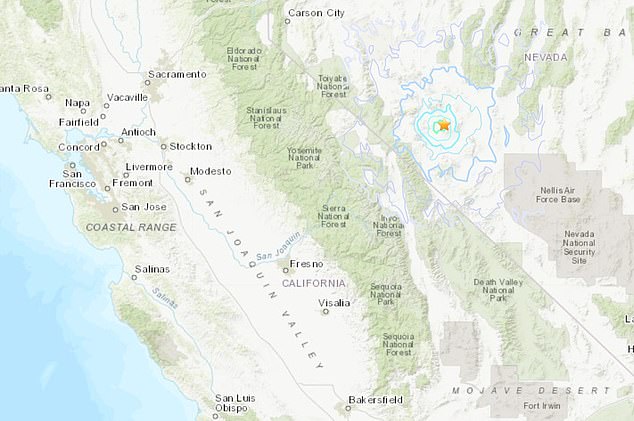 Pictured: A map from the U.S. Geological Survey showing the location of the earthquake that struck at 1:13 a.m. on Friday close to the Californian border

At 1:14 a.m., the U.S. Geological Survey reported another 5.2 earthquake near Ridgecrest, California, but this was later retracted.

The USGS said it occurred at a depth of 6.3 kilometres (just under four miles).

So far, no injuries have been reported.

The USGS shows that in the past 10 days, there had been another earthquake of magnitude 3.0 or higher centred nearby.

On average, give earthquakes with magnitudes between 5.0 and 6.0 occur per year in California and Nevada, according to the Los Angeles Times.