A Brooklyn-based rapper who was seen in a viral video blasting a flamethrower from the roof of a New York City bus turned himself in to police on Wednesday, according to his lawyer.

The man, who has since been identified as rapper Dupree G.O.D – real name Christopher Dupree – made headlines on Tuesday after footage of his dangerous stunt was widely shared on social media.

The video was brought to the attention of the NYPD which subsequently launched an investigation into the November 8 incident that took place between Putnam Avenue and Franklin Avenue in Brooklyn. 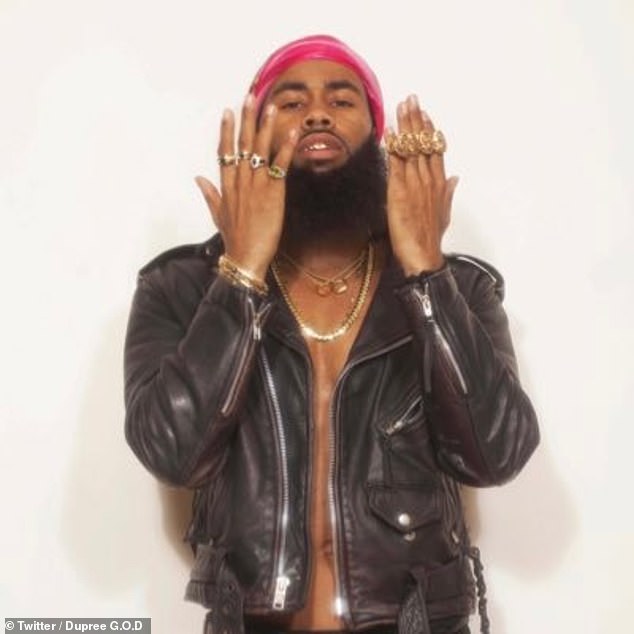 The shirtless man who was filmed in a viral video blasting a flamethrower on top of a NYC bus has been identified as rapper Dupree G.O.D – real name Christopher Dupree 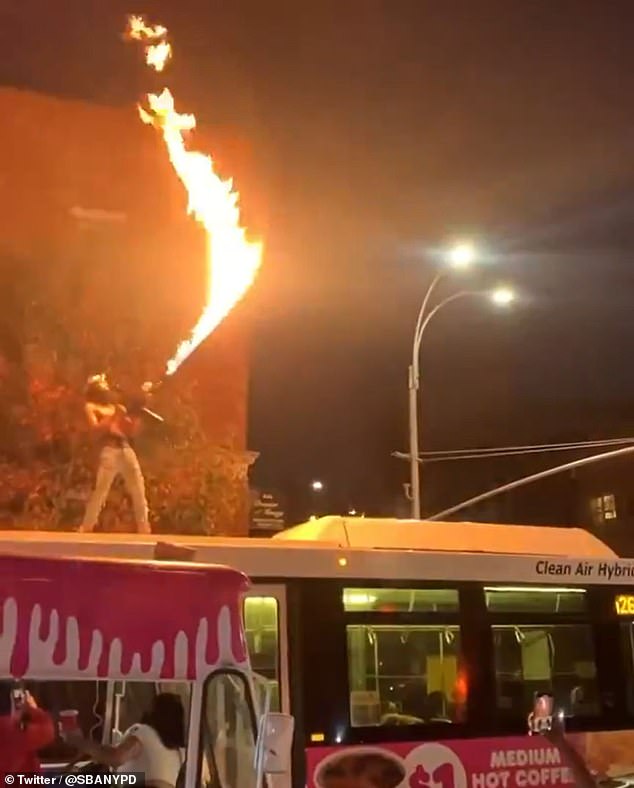 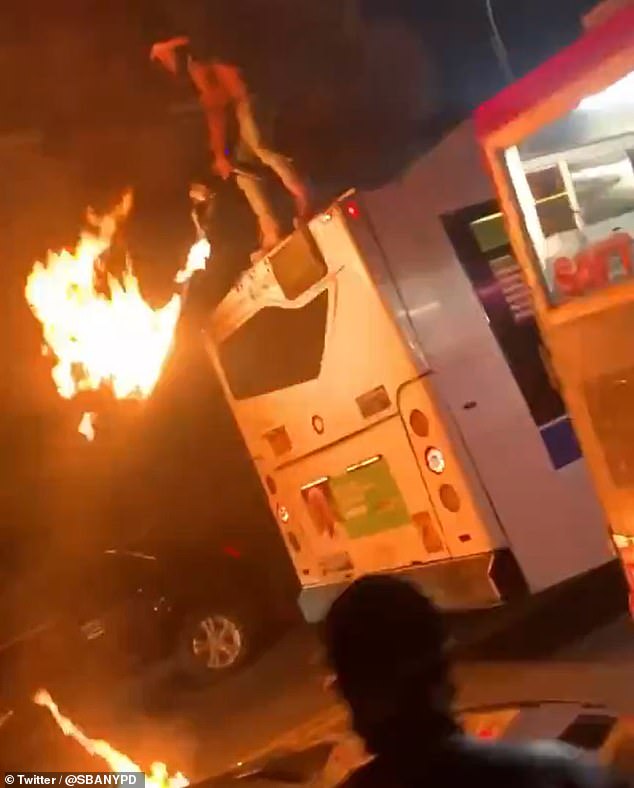 He then pointed the device to the ground, setting part of the street on fire

Dupree’s lawyer Cary London told the New York Daily News the rapper would turn himself in at the 79th Precinct in the Bedford-Stuyvesant section of Brooklyn this afternoon.

‘[Mayor] De Blasio is already burning this city to the ground – so what’s one more fire?’ London told the paper.

Dupree, 35, was filmed jumping onto a crowded B26 bus from an ice cream truck and firing a flames into the air before setting fire to part of the road.

Ignited fuel could be seen dripping on the roof of the bus carrying more than two dozen passengers who were then transferred to a new one at the next stop.

He stayed on top of the vehicle for about 30 seconds as it was stopped at the intersection before walking to the back as it began to move.

He then aimed the flamethrower at the ground and set part of the street alight before jumping off, just narrowly avoiding the line of flames he had ignited.

The stunt was later revealed to have been part of a Wu-tang tribute music video, according to Dupree’s social media.

Following his arrest, the New York Post reported Dupree had allegedly tried to score an endorsement deal after his stunt went viral.

The aspiring artist called a Manhattan-based PR firm, which did not want to be named, proposing an apparel deal ahead of his surrender, according to the paper. 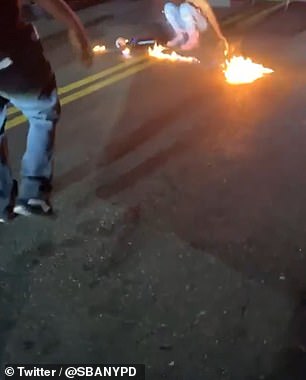 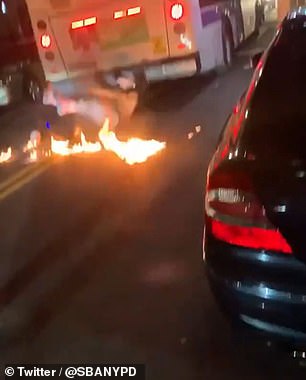 Dupree landed badly as he jumped, just narrowling avoiding the line of flames he had ignited 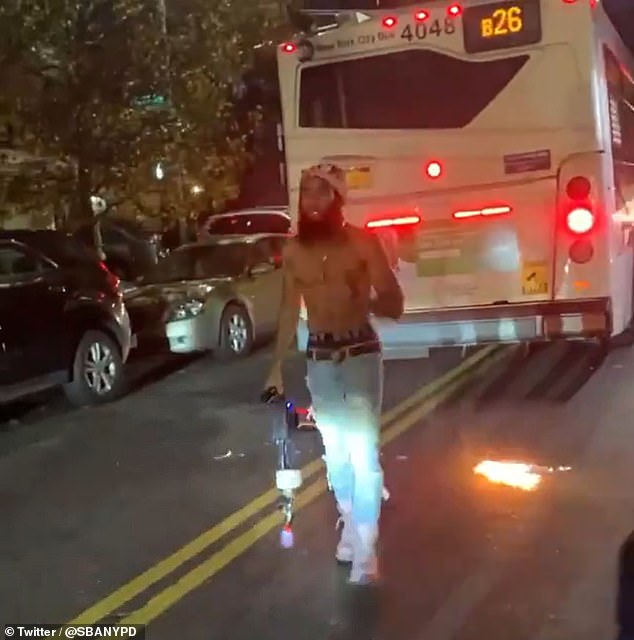 Dupree was reported to have turned himself in to police on Wednesday afternoon, his lawyer said

An employee at the firm said Dupree wanted ‘to wear apparel while getting arrested if any brand will pay him’ and was looking for a company that wanted to ‘maximize on all the publicity he’s gotten.’

The firm declined the offer, according to the Post.

The wannabe rapper had shared footage of his performance on Twitter where he described the stunt as ‘epic.’

‘We did that right. #wutang music video shoot is going to be sick,’ he said in a tweet.

His social media account appears to show his penchant for fire, having shared a video of himself playing ‘flamethrower tag’ and Spin the Bottle with his friends just days earlier.

The shocking clip showed the bottle landing on Dupree, giving him control of the giant blow torch which he blasted towards his friends.

The group of men were seen running away from the flames in what appeared to be a deserted parking lot. 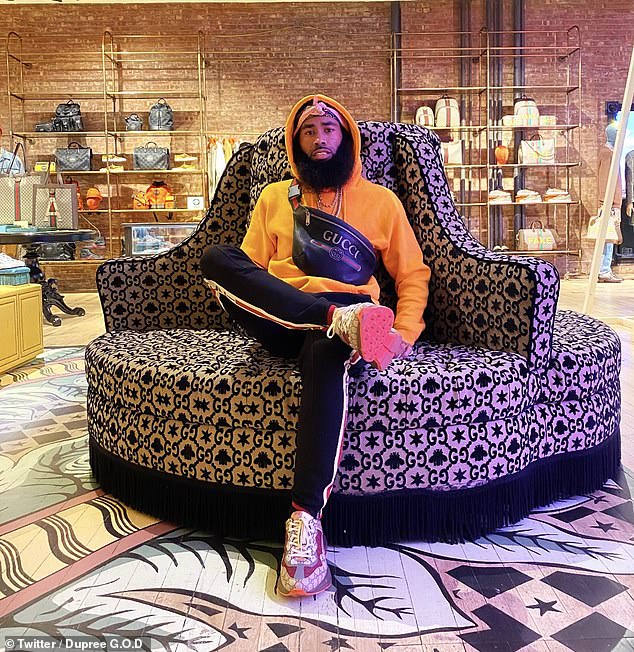 The 35-year-old aspiring rapper had shared drone footage of his stunt on Instagram, where he has 17,700 followers, but has since made his account private 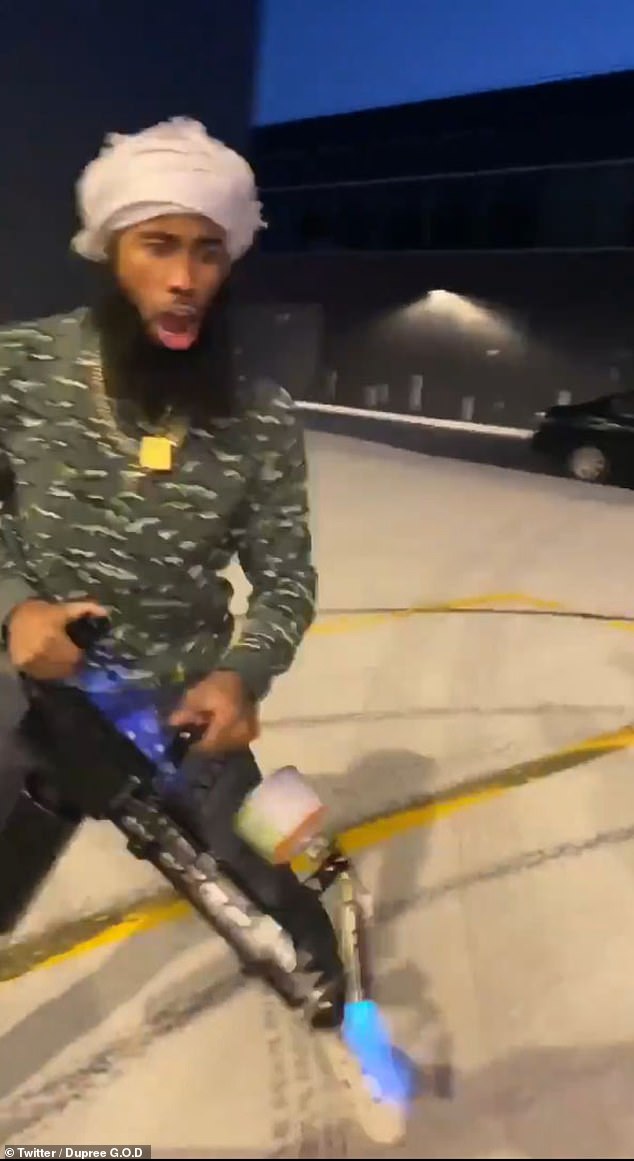 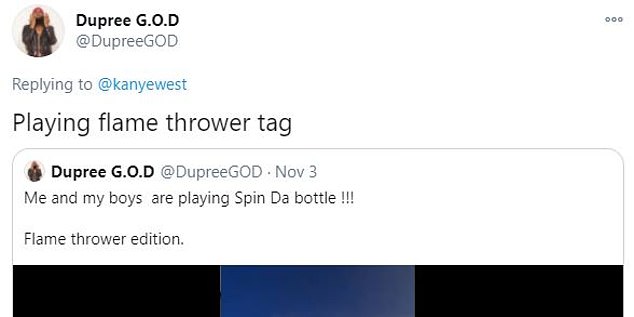 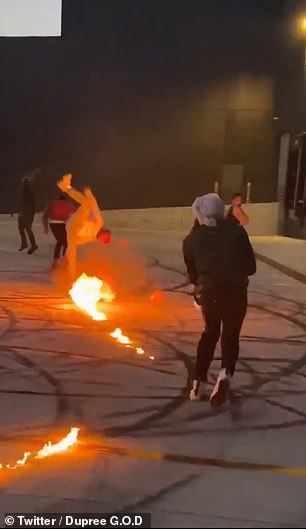 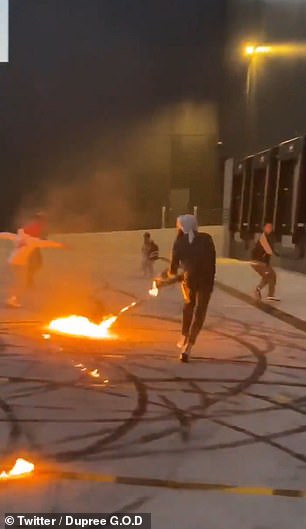 The shocking clip showed the bottle landing on Dupree, giving him control of the giant blow torch which he blasted towards his friends

Flamethrowers had been legal in New York up until last June, when the state senate passed a bill that would make it a felony to possess one, except in certain circumstances.

Dupree could potentially face reckless endangerment charges over the stunt.

According to his website, Dupree was born and raised in Brooklyn to a young mother musician father.

He previously went by the stage name ‘WordSpit’ and in 2009 landed a nationwide television campaign for McDonald’s.

Dupree had shared drone footage of his stunt on Instagram, where he has 17,700 followers, but has since made his account private.

‘Flame Thrower Bus Jump,’ he wrote in a post.

‘Wutang music video shoot was insane. It was a movie. It was f*****g epic. Much everyone to all who came out. 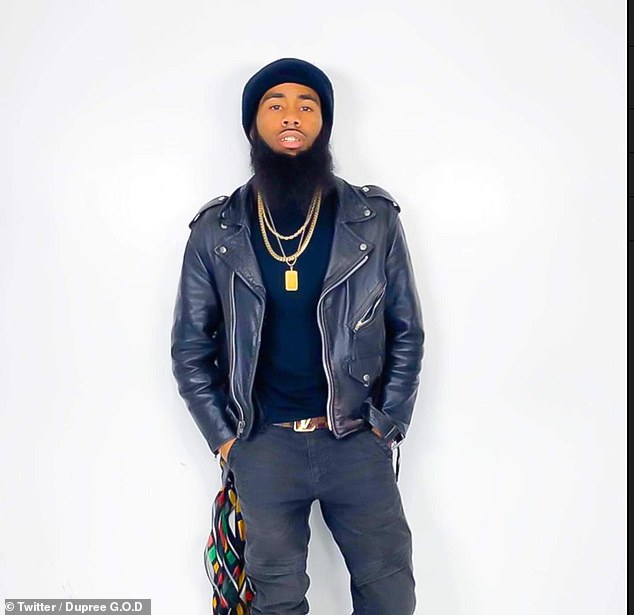 According to his website, Dupree was born and raised in Brooklyn to a young mother musician father 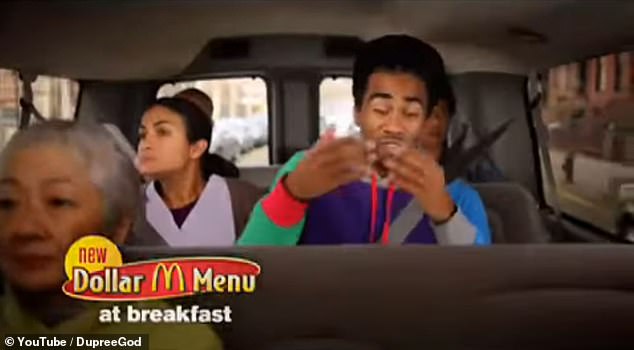 ‘We shut Franklin Avenue Down. With amazing energy. We are in this together. We The ILLest. Video coming,’ he added.

In a previous post, he had invited fans and friends to join him between 2pm and 4pm that day, where he’d be handing out free ice-cream, champagne and t-shirts as they filmed.

‘We outside tomorrow. Pull up to my music video shoot for my new song Wutang. It’s a celebration,’ he said.

The NYPD and MTA addressed their concerns over the dangerous stunt and confirmed that no permit had been approved to film on the bus.

‘We are aware of a video circulating social media that shows a man using a flame thrower on top of a bus in Brooklyn,’ the NYPD said in a tweet. 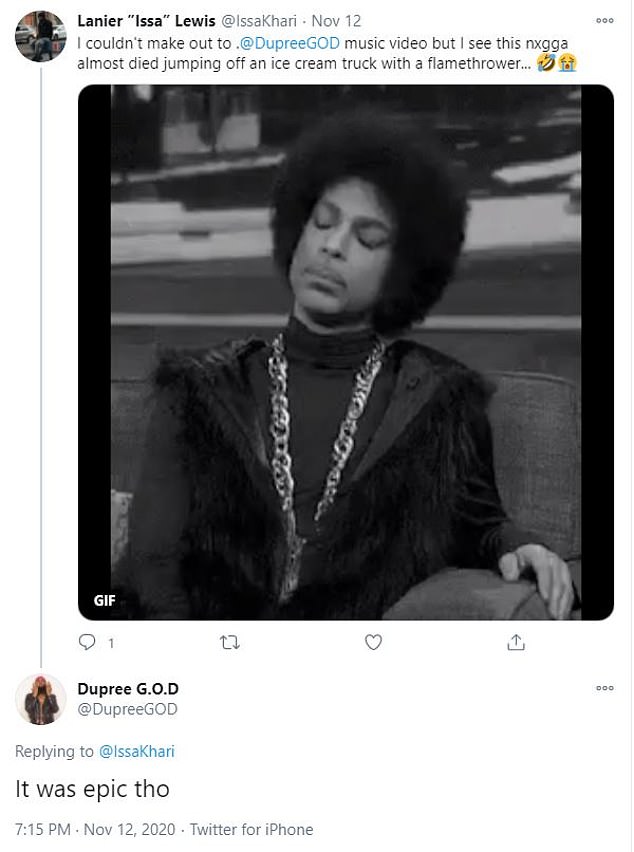 The wannabe rapper had shared footage of his performance on Twitter, where he described the stunt as ‘epic’

‘The incident is currently under investigation. We have the utmost confidence in our @NYPDDetectives that this case will be solved quickly.’

‘We don’t even need to say how absurd, dangerous and just plain stupid this was,’ added MTA spokesman Tim Minton.

‘The reckless individual who torched over the top of an occupied bus put New Yorkers, including the bus operator, in life-threatening peril.’

The video was also condemned by the NYPD’s Sergeants Benevolent Association, who shared it on Twitter, taking a hit at the defunding of the city’s police department.

‘NYC is NOT safe YOU are being lied to,’ the union raged in a since-deleted tweet.

‘Keep defunding the police this will become rampant.’

As mass protests against police brutality erupted across the country in June, the New York City Council voted to slash $1billion from the NYPD’s $6billion annual budget.

No injuries were reported in the flamethrower stunt, according to the Post, and the 25 passengers on the bus were moved to another bus at the next stop.