Sweden is debating enforcing new coronavirus restrictions on Stockholm amid a spike in infections.

The country’s chief epidemiologist Anders Tegnell said new measures for the capital could not be ruled out.

It came just hours after the city’s top health official warned the region has seen a surge in cases.

The news has prompted concerns over whether Sweden has achieve ‘herd immunity’ or not.

Meanwhile Tegnell claimed the country’s success in battling last year’s winter flu has been the cause for its high coronavirus death toll. 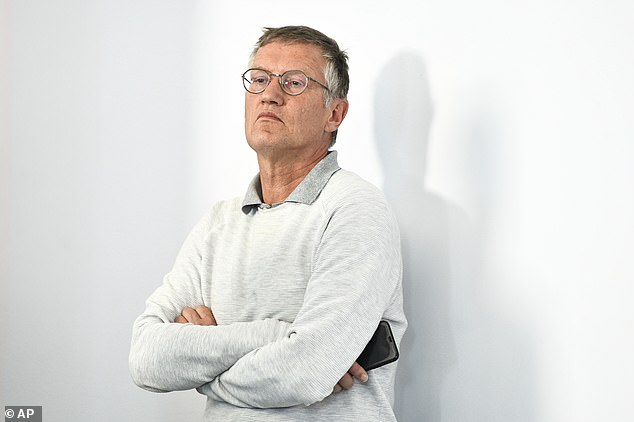 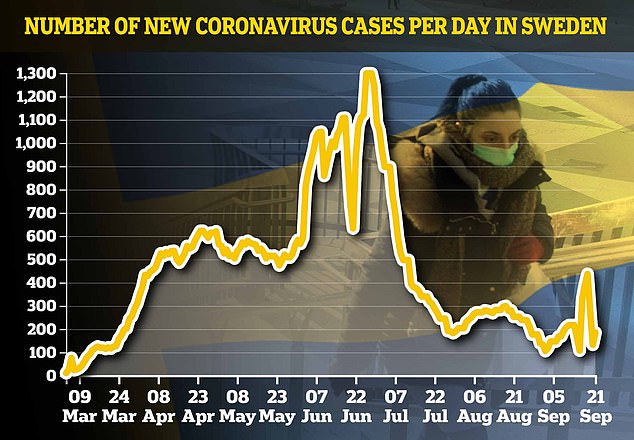 Sweden’s strategy emphasising personal responsibility rather than major lockdowns to slow the virus drew fierce criticism as deaths shot up in spring.

Infections dropped significantly in the summer and they had been spared the type of sharp increases in new cases seen in Spain, France and Britain this month.

But around 1,200 new cases and five deaths have been reported since Friday compared to around 200 cases per day in the last few weeks.

The increase in new cases cannot solely be explained by increased testing, the Public Health Agency said on Tuesday.

‘It hasn’t affected the healthcare – yet. The number of new cases at ICU is very low and the number of deaths are very low.’

However Tegnell said that new measures for the capital could not be ruled out due to the spike.

He said: ‘We have a discussion with Stockholm about whether we need to introduce measures to reduce the spread of infection. Exactly what that will be, we will come back to in the next few days.’ 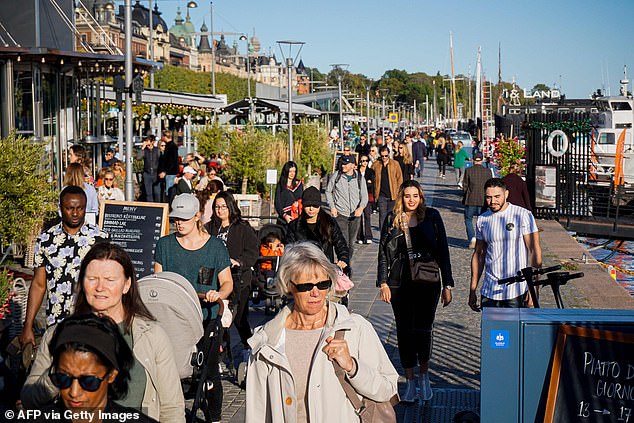 The Scandinavian nation was the only country in Europe not to introduce strict lockdown measures at the start of the pandemic. Pictured: Crowds walking in Stockholm this week

What is ‘herd immunity’?

Herd immunity is a situation in which a population of people is protected from a disease because so many of them are unaffected by it – because they’ve already had it or have been vaccinated – that it cannot spread. To cause an outbreak a disease-causing bacteria or virus must have a continuous supply of potential victims who are not immune to it.

Immunity is when your body knows exactly how to fight off a certain type of infection because it has encountered it before, either by having the illness in the past or through a vaccine. When a virus or bacteria enters the body the immune system creates substances called antibodies, which are designed to destroy one specific type of bug.

When these have been created once, some of them remain in the body and the body also remembers how to make them again. Antibodies – alongside T cells – provide long-term protection, or immunity, against an illness. If nobody is immune to an illness – as was the case at the beginning of the coronavirus outbreak – it can spread like wildfire.

But if, for example, half of people have immunity – from a past infection or a vaccine – there are only half as many people the illness can spread to. As more people become immune the bug finds it harder and harder to spread until its pool of victims becomes so small it can no longer spread at all.

The threshold for herd immunity is different for various illnesses, depending on contagion.

Earlier on Tuesday Stockholm’s top health official warned that the region had seen an increase in cases.

‘We can only hope that this is a blip, that the spread start decreasing again. That depends on how well we follow the guidelines.’

Sweden has 5,870 deaths, many more per capita than its Nordic neighbours but lower than countries such as Spain and Italy that opted for hard lockdowns.

The country kept open schools for children under 16, banned gatherings of more than 50 people and told over-70s and vulnerable groups to self-isolate.

Shops, bars and restaurants have stayed open throughout the pandemic and the wearing of masks has not been advised by the government.

Tegnell now claims the country’s success against the seasonal flu last winter has been the cause for its high Covid death toll.

He told Dagens Nyheter: ‘When many people die of the flu in the winter, fewer die in heatwaves the following summer. In this case, it was Covid-19 that caused many to die.

‘What has been seen is that the countries that have had a fairly low mortality for influenza in the past two, three years, such as Sweden, have a very high excess mortality in Covid-19.

‘Those which had a high flu mortality rate, such as Norway, have fairly low Covid mortality. The trend has been seen in several countries.

‘This may not be the whole explanation but part of it. That also explained the high death rates recorded in the UK and Belgium.’

The virus has ripped through care homes in Sweden, with nearly half of all deaths occurring in them.

Prime Minister Stefan Lofven even confessed in May the country had not done enough to protect vulnerable people.

Tegnell admits there were severe errors made over care homes but does not believe a lockdown would have helped.

He claims residents who escaped the winter flu are the ones to have died due to coronavirus.