With just 39 days until the election, President Trump and Democratic presidential nominee Joe Biden are continuing to campaign in very different ways.

On Friday, the Commander-in-chief kept up his frenetic schedule, hosting four campaign events in three different states as Biden continued to lay low.

While national polls shows Biden remains favorite to win the White House on November 3, Trump is taking no chances – jetting from Florida to Georgia to Washington, D.C. to Virginia within the space of 12 hours.

During his action-packed day, Trump repeatedly mocked Biden for his leisurely style of campaigning, at one point stating:  ‘This guy never goes out. It’s terrible huh?’

President Donald Trump kept up his frenetic schedule on Friday, hosting four campaign events in three different states. He is pictured starting off his morning at a ‘Latinos For Trump’ roundtable in Florida 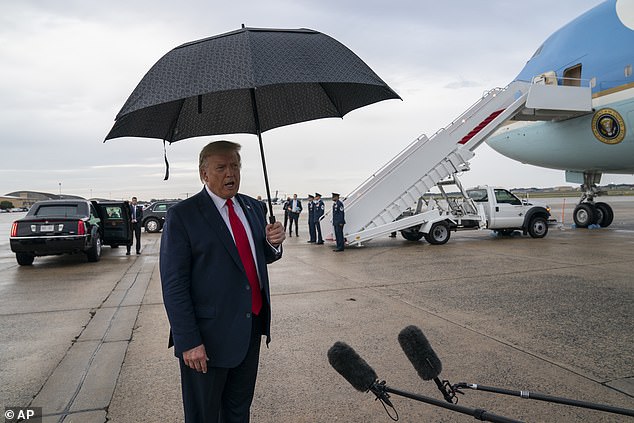 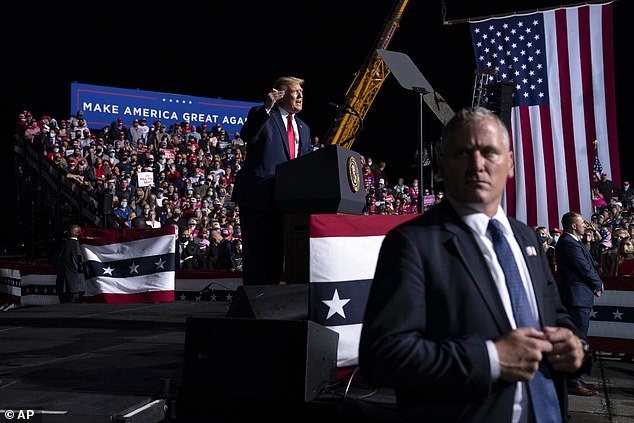 Trump ended his action packed day with a rally in Newport News, Virginia 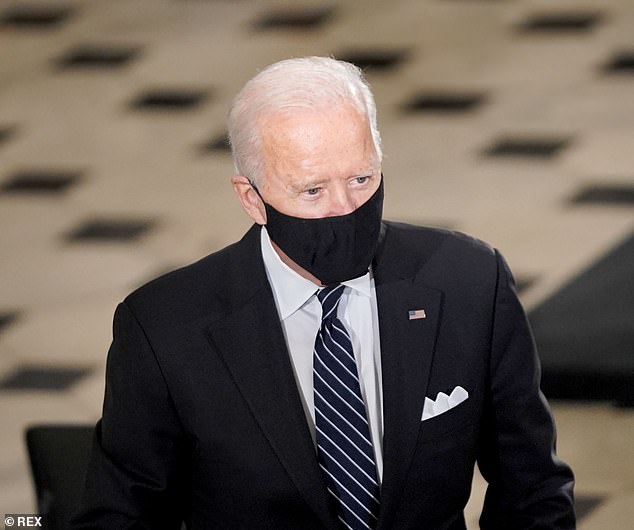 At the start of the day, the President awoke in Florida at his Trump National Doral Miami, where he hosted a ‘Latinos for Trump’ roundtable scheduled for 11am.

Trump hit out at Biden during the event, claiming the Democrat contender had ‘sold out the Hispanic American community’ by offshoring jobs.

Trump referred to himself as a ‘wall between the American dream and chaos, and a horror show’.

Crowds of supporters stood outside the Doral resort, including several who waved ‘Latinos For Trump’ and ‘Cubans For Trump’ placards.

From there the President flew to Atlanta, Georgia where he tried to muster up support among black voters. 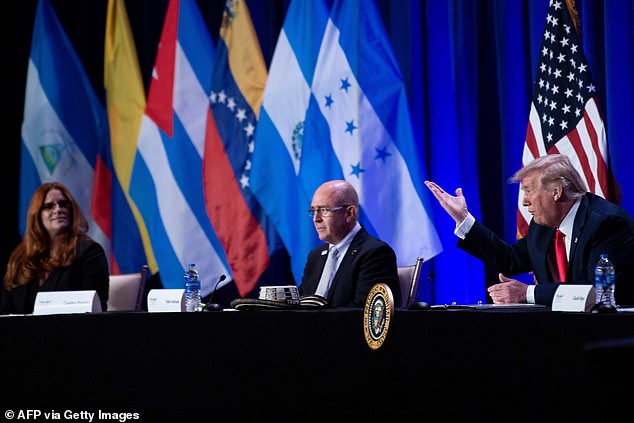 Trump hit out at Biden during his roundtable in Florida, claiming the Democrat contender had ‘sold out the Hispanic American community’ by offshoring jobs 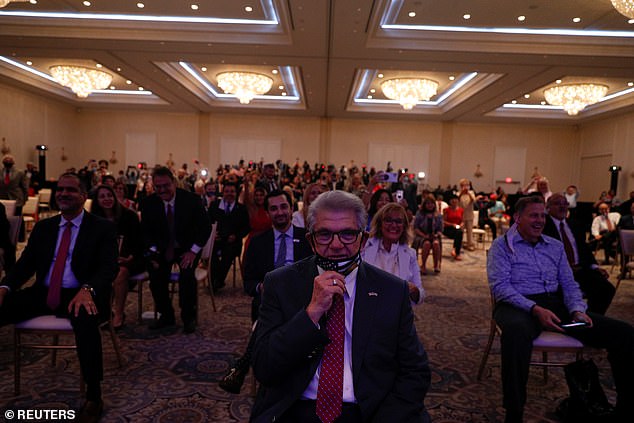 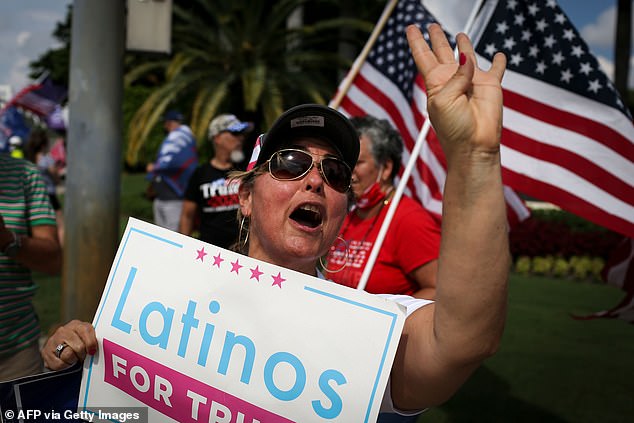 Crowds of supporters stood outside the Doral resort, including several who waved ‘Latinos For Trump’ and ‘Cubans For Trump’ placards

Georgia has voted Republican in the last six elections but is now considered a swing state.

At 2.30pm, Trump appeared at a ‘Black Economic Empowerment’ event, where he insisted that as president he did ‘even more than I promised’ for African Americans.

‘I did more for the black community in 47 months… than Joe Biden did in 47 years,’ he said, repeatedly swiping at Biden’s legislative record in co-sponsoring a 1990s tough-on-crime legislation that many experts say resulted in high incarceration rates for black Americans.

Trump said he was unveiling a ‘platinum plan’ that aims to increase capital to African Americans, create three million new jobs for the black community and implement ‘the highest standards of policing.’ 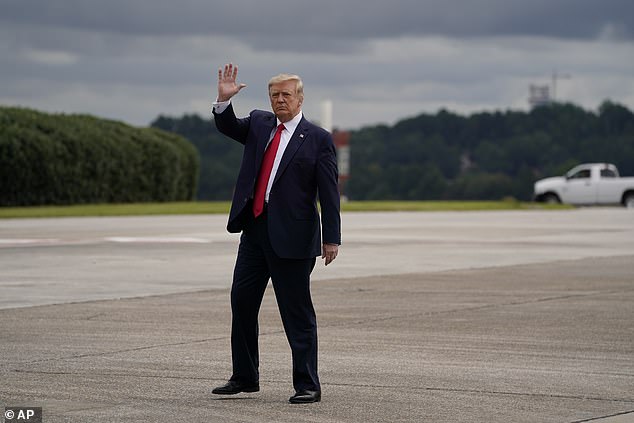 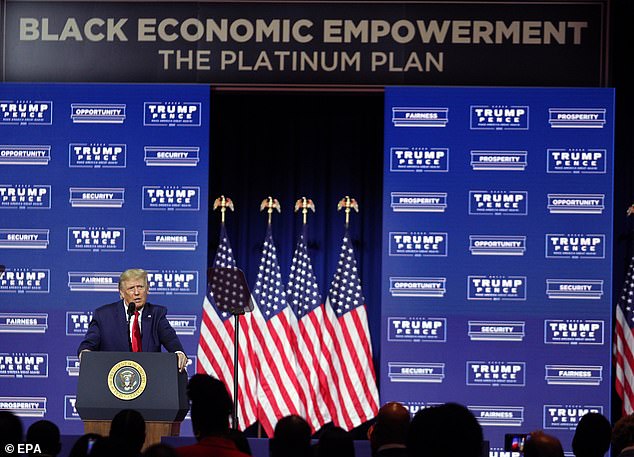 After touching down in Georgia, Trump appeared at a ‘Black Economic Empowerment’ event, where he insisted that as president he did ‘even more than I promised’ for African Americans 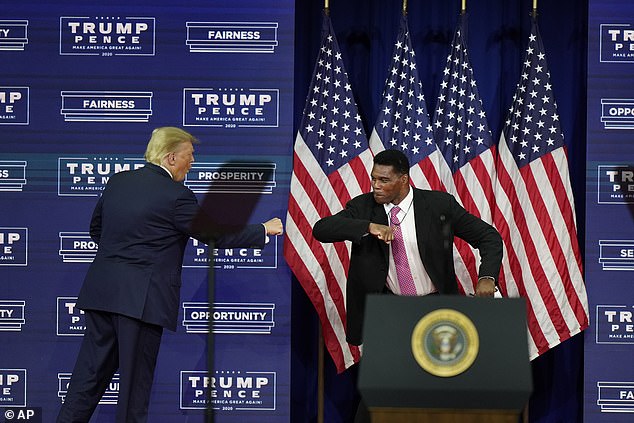 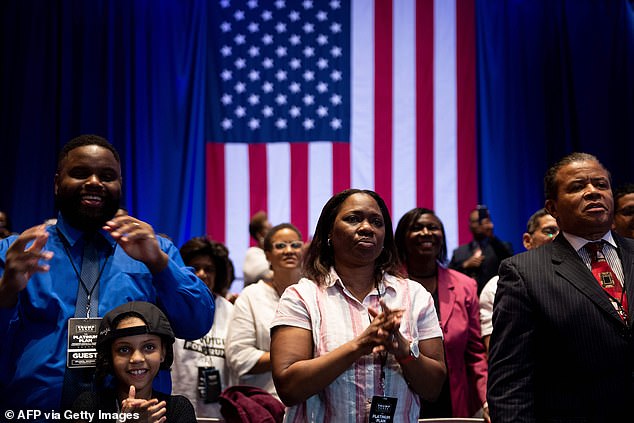 Supporters are seen listening to President Trump speak in Atlanta

The energetic President, 74, then jetted back to the nation’s capitol for an 85 minute fundraiser held early evening at his Pennsylvania Avenue hotel.

Biden and the Democrats significantly outraised the president and Republicans last month, but Friday night’s dinner was expected to bring in added funds from the President.

After his brief appearance at that event, Trump was back on Air Force One to fly to Newport News, Virginia for a 9pm campaign rally.

While Virginia is likely to stay blue, Newport News is close enough to the North Carolina media market, for the president to benefit there too.

Trump’s jam-packed schedule is in striking contrast to Biden, who continues to law low in comparison. 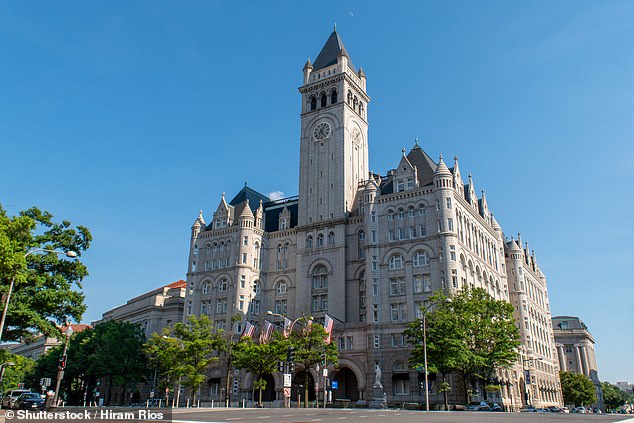 After a stop in Atlanta, Georgia Friday afternoon, President Trump spent 85 minutes at his Washington, D.C. hotel to participate in a campaign fundraising event with supporters 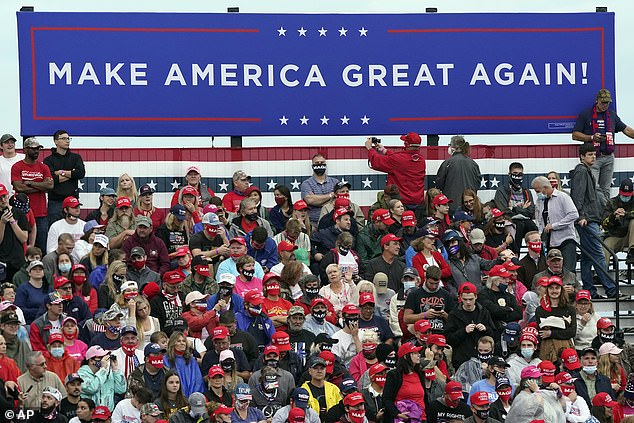 Trump was back on Air Force One to fly to Newport News, Virginia for a 9 pm campaign rally. Supporters are seen preparing for the event earlier in the evening 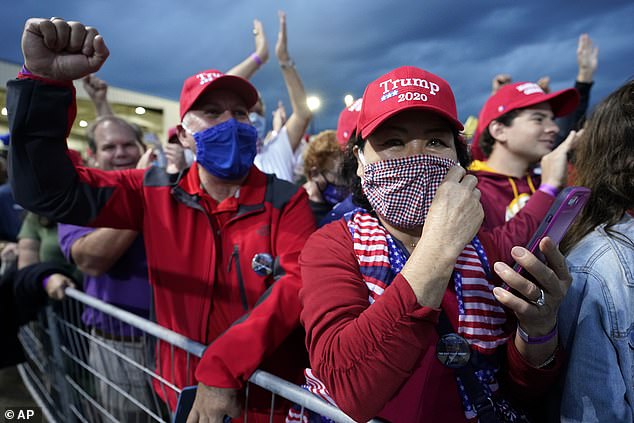 Trump supporters are seen waiting for the President’s arrival in Newport News, Virginia

Biden traveled from his home in Delaware to Washington on Friday to attend a ceremony at the US Capitol as late Supreme Court justice Ruth Bader Ginsburg lay in state there.

But there was no in-person campaigning on the former vice president’s schedule.

The 77-year-old has been cautious about the coronavirus pandemic, and spent months mostly hunkered down in his Delaware home.

While he has increased campaigning in swing states like Wisconsin, Pennsylvania and Michigan, his events are tightly scripted with only occasional interaction with voters.

The Democratic candidate visited Florida last week to kick off Hispanic Heritage Month, but the event featured no large audience. 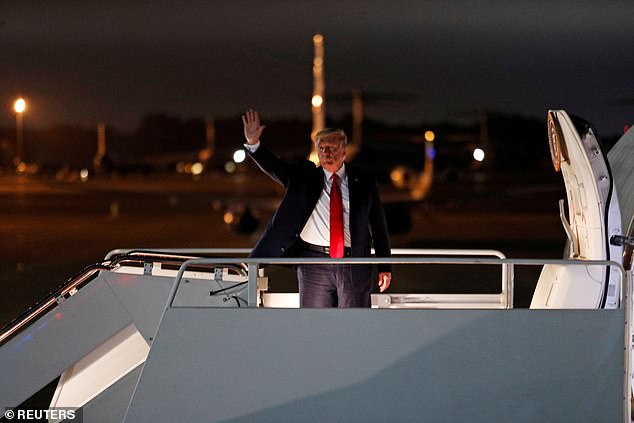 Trump waves before boarding Air Force One as he departs for a campaign event Newport News, Virginia, following a brief appearance at a D.C. fundraiser 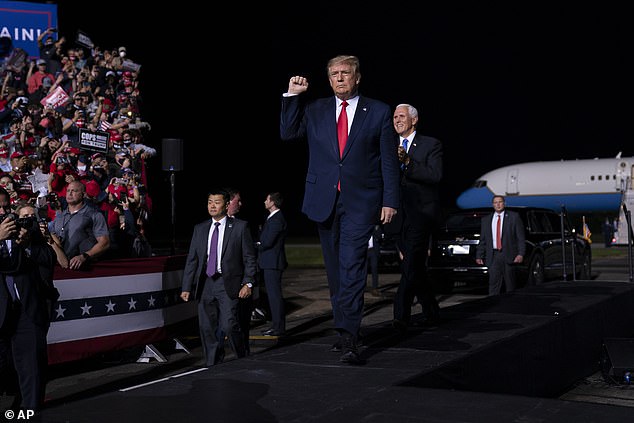 Some Democrats are hitting out at Biden for his refusal to hold more in-person rallies or travel more broadly.

‘I thought he had his own plane. He doesn’t have to sit with one space between another person on a commercial airline like I would,’ Hinojosa stated.

Hinojosa believes Biden is missing opportunities to connect with Hispanic voters in states such as Texas and Arizona that may prove crucial on November 3.

But the Biden campaign is standing by their decision to do lots of virtual events and keep travel to a minimum.

‘We are campaigning safely and effectively, and our message is reaching voters in battleground states and generating the enthusiasm and energy we need to beat Donald Trump,’ Biden spokesman, TJ Ducklo, stated. 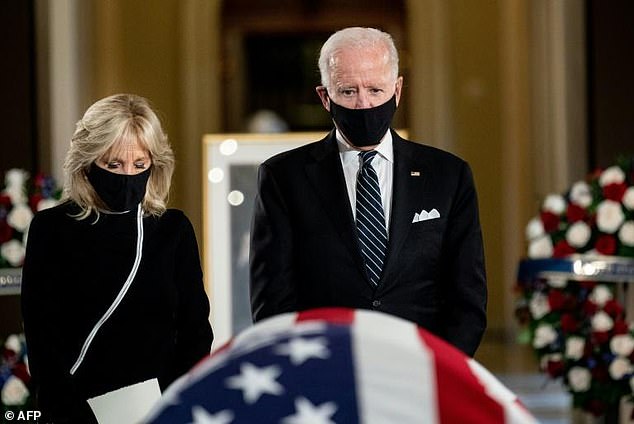