Women who sleep poorly tend to eat more and have a lower-quality diet, a study shows.

Researchers tracked 500 womens’ sleep, finding those who take a long time to fall asleep eat more calories every day. Those who wake up a lot throughout the night tend to eat fattier foods.

The researchers believe a lack of shut-eye either triggers hunger, or suppresses signals that tell the brain the stomach is full.

The findings provide fresh insight into why bad sleepers have repeatedly shown to be more at risk of heart disease.

If women have bad sleep quality and eat more as a result, they are more likely to be obese –  a risk factor for a myriad of heart problems and other diseases. 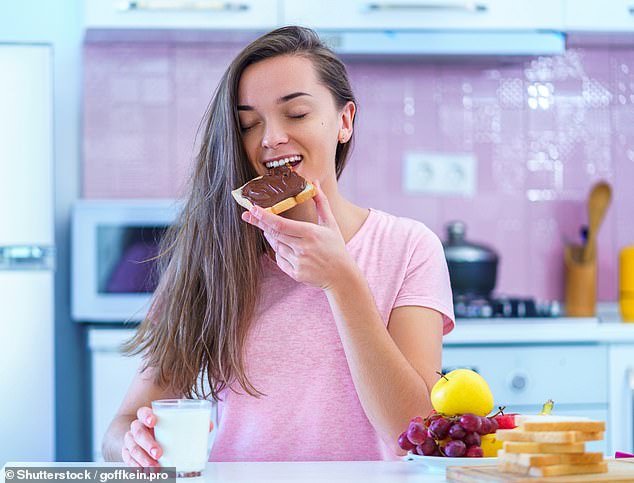 omen who struggle to fall asleep or wake up often gorge on calorific foods. The researchers believe poor sleep either triggers hunger signals or suppresses signals of fullness

The researchers – from Columbia University in New York – sought to get a more comprehensive picture in women by examining the link between diet and sleep quality.

She said: ‘Women are particularly prone to sleep disturbances across the life span, because they often shoulder the responsibilities of caring for children and family and, later, because of menopausal hormones.’

The sleep and eating habits of an ethnically-diverse group of 495 women, aged between 20 between 76, were collected.

Women reported their sleep quality – which is how ‘sound’ a sleep they have – the time it took to fall asleep, and any symptoms of insomnia.

Their sleep was scored using the Pittsburgh Sleep Quality Index and the Insomnia Severity Index.

Participants reported how much or little they ate of around 70 food items throughout the year.

Women who have poor sleep quality overall ate 143 calories and 100g of extra food per day than those with good sleep quality.

They ate slightly more carbohydrates and an extra 4g of added sugar per 1,000 calories.

HOW DOES A BAD NIGHT’S SLEEP AFFECT FOOD CHOICES?

Scientists at Sapienza University of Rome found people who aren’t used to a lack of shut eye eat more – around 50 calories extra at breakfast.

The research measured how much food three dozen students, of which half had signs of insomnia, consumed in the morning.

Half of each group had a normal kip. The others were allowed only five hours of shut eye – to mimic that of sleep deprivation.

Experts expected those with insomnia symptoms to eat most of the buffet they put on, which included croissants, Nutella and biscuits.

After the participants left, the researchers calculated how many calories and what macronutrients they had each eaten by weighing food.

However, the scientists found only overweight ‘good’ sleepers ate more after sleep deprivation, while ‘insomniacs’ did not.

A breakdown of what they consumed revealed they also ate less carbohydrates and fat.

Good sleepers with a high BMI who were deprived of sleep ate more food, while those who generally didn’t sleep well did not.

However, there was little difference among sleep-deprived students without signs of insomnia who had a healthier BMI.

The findings suggest food choices are not only affected by one night of sleep, but habits formed over a lifetime, the researchers said.

The findings are published in the journal Clinical Psychologist.

Women with insomnia symptoms consumed 216 extra calories and 124g of food by weight than those who slept well. They ate fattier foods and an extra 3g of sugar per 1,000 calories.

Similar to previous studies of sleep and diet, the study found that those with worse overall sleep quality consumed more sugary foods.

This may explain the link between poor sleep and obesity and type 2 diabetes.

Dr Aggarwal said: ‘Our interpretation is that women with poor-quality sleep could be overeating during subsequent meals and making more unhealthy food choices.’

‘Fullness is largely affected by the weight or volume of food consumed, and it could be that women with insomnia consume a greater amount of food in an effort to feel full.

‘However, it’s also possible that poor diet has a negative impact on women’s sleep quality.

‘Eating more could also cause gastrointestinal discomfort, for instance, making it harder to fall asleep or remain asleep.’

The authors also note insomnia can influence activity in the hippocampus region of the brain, which is involved in regulating food intake.

Dr Aggarwal added: ‘Given that poor diet and overeating may lead to obesity-a well-established risk factor for heart disease.

‘Future studies should test whether therapies that improve sleep quality can promote cardiometabolic health in women.’

The findings were published in Journal of the American Heart Association today.

They support previous research showing people who sleep less are more likely to to be obese and develop type 2 diabetes.

The amount of time a person sleeps has been linked to their risk of cardiovascular disease time and time again.

Lack of sleep shortens your life expectancy, according to the NHS, and has previously been linked to a greater risk of cancer.

Poor sleep may increase the risk of cancer by permanently damaging DNA’s ability to repair itself.

The recommended hours of sleep for people vary across age groups.

An adult aged between 18 and 60 should get at least seven hours of sleep per night, according to the website of the US Centers for Disease Control and Prevention.

Figures from the Royal Society for Public Health estimate the average person sleeps for 6.8 hours a night, but the the NHS recommends people get eight hours.

More than 40million people suffer from long-term sleep disorders in the US, data from the CDC shows. While it is estimated there are 1.5million patients in the UK.